Those who lived through this infamous blizzard had never seen so much snow from one storm or over one winter. And most people today forget about the second disaster that quickly followed – and led to at least 80 fatalities. 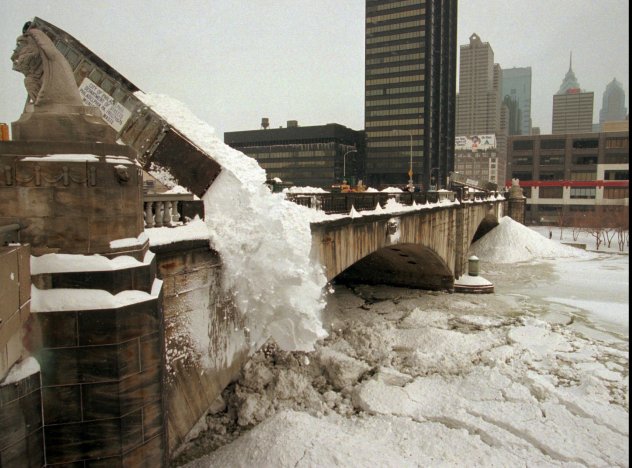 A truck dumps a huge load of snow into the Schuylkill River in Philadelphia on Jan. 8, 1996. (AP Photo/Nanine Hartzenbusch)

When it comes to notorious winter weather events throughout history, only a select few are remembered by name. The Blizzard of 1996 is one of them.

It’s one of the defining winter storms of the 20th century and is still a record-holder to this date for several cities. A true blockbuster storm, this nor’easter walloped the Eastern Seaboard in a manner that few snowstorms in the past have been able to do. Over the course of Jan. 6-8, 1996, it blanketed areas from central North Carolina to southern Maine, while immobilizing the Northeast corridor for days.

To this day, the Blizzard of '96 remains Philadelphia’s single biggest snowstorm on record with a total of 30.7 inches. Elsewhere, nearly 2 feet fell in New York City, and 18 inches were measured in Boston. Those totals were substantial but still fell short of the largest accumulations in western Virginia and the mountains of West Virginia where amounts between 40 and 48 inches fell, according to the National Weather Service. 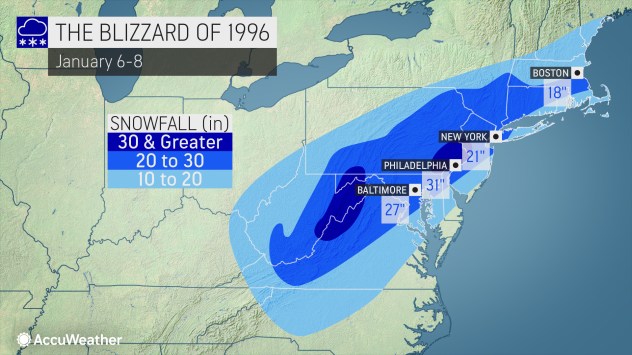 This map shows the extent of the Blizzard of '96 and where the heaviest snow accumulations were during the three-day event. Snowfall totals shown above have been rounded to the nearest inch.

The storm unleashed howling winds that whipped up snowdrifts around 5 to 8 feet in spots, nearly covering stranded vehicles left on motorways around the region. As the storm ramped up, it produced prolific snowfall rates of 1-4 inches per hour from Pennsylvania into southern New England, while buffeting the coasts with gale-force winds and triggering coastal flooding.

An analysis of the storm by the NWS blamed at least 60 fatalities on the blizzard. Many of the deaths were due to people suffering heart attacks while shoveling snow. States of emergency were declared across the region.

AccuWeather Senior Meteorologist Dave Dombek, who has spent more than four decades issuing forecasts for the company, said he remembered that there was a “classic” atmospheric setup that allowed the blizzard to take shape.

A fresh injection of Arctic air trickled into the eastern United States from Canada while the storm took shape over the Tennessee Valley. The storm then transferred its energy to the North Carolina and Virginia coast, he explained.

“That was a textbook scenario for a big snowstorm,” Dombek said.

From personal experience, Dombek said there was only one winter storm in his memory of greater significance: the Blizzard of '93. He noted that the 1993 storm packed more of a punch in terms of higher snowfall totals in the Centre County, Pennsylvania, area where AccuWeather is headquartered, as well as wind gusts which hit 60 mph at the height of that event. 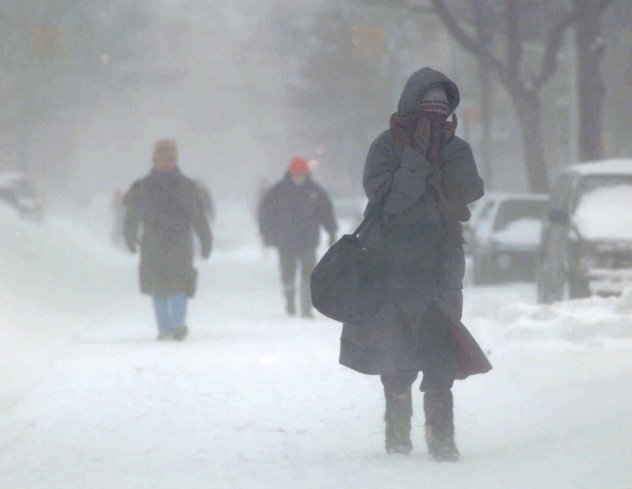 Commuters walk down the middle of a street through blowing snow to a subway station in the Park Slope section of Brooklyn on Jan. 8, 1996. (AP Photo/Mark Lennihan)

Dombek, 63, said he was working that Saturday, Jan. 6, as the snow began to pile up in central Pennsylvania. Despite having a four-wheel-drive pickup truck with good tires, he knew it would be a challenge to drive home that night. So he took up AccuWeather’s offer of staying in a hotel located close to the company’s location in State College, Pennsylvania, for the night.

He said he remembered walking over to the hotel after he concluded a long shift shortly after midnight. Upon entering the room, it wasn’t exactly the warm, inviting scene he had likely been anticipating.

“When I got in the room, I noticed that it was freezing in there. I was able to see my breath,” he said. “I then noticed that the window was open about an inch and snow was blowing into the room. I closed the window, cranked up the heat, and it took until the wee hours of the morning to finally get warm in my room. All and all, it was a very memorable experience for me,” Dombek said.

For others who had yet to become trained meteorologists, the blizzard would serve as an early launching pad to their future careers.

AccuWeather Broadcast Meteorologist Geoff Cornish grew up in Worcester Township, Pennsylvania, located in the heart of Montgomery County in the Philadelphia suburbs. Cornish was 14 at the time and said that storm, along with the Blizzard of '93 and a tornado in nearby Limerick in 1994, were key weather events that helped spark an early interest in meteorology.

“This entire three- to four-year stretch from 1993-1996 really solidified my love for the weather,” Cornish said.

He recalled that the staggering amount of snow left school closed for days, and said there was about 30 inches or so in his backyard.

“It set the table for some great sledding and building snow forts,” Cornish said.

The hefty snowfall left on the ground was so extreme, that even snowplows weren’t enough to get the snow removal process done. In the Philadelphia suburbs, equipment beyond the typical plows was deployed, Cornish said, recalling how front-end loaders and excavation equipment were used.

News photos showed city workers in Philadelphia using dump trucks to unload massive snow piles over the side of a bridge and into the Schuylkill River, which runs through the western portion of the city.

For fellow AccuWeather Broadcast Meteorologist Melissa Constanzer, who grew up in the small town of Barto, Pennsylvania, about 52 miles northwest of Philadelphia, it would be three days until snowplows could clear her street. In the meantime, Constanzer, who was 5 years old that winter, would use her driveway as a newfound winter playground.

“The piles of snow around the edge of the driveway were between 6 and 8 feet, acting as walls. “The sidewalks to and from the house from the driveway almost seemed like tunnels,” she said. “One of the things that most stands out is being able to let the dog run around on the driveway and play with her.”

Like Cornish, former AccuWeather Broadcast Meteorologist Brittany Boyer also grew up in the Philadelphia suburbs. Boyer was 7 years old at the time of the storm and more than two decades later she still hasn’t experienced a snowstorm as impactful as that one.

“Until this day -- besides covering the weather as a meteorologist and experiencing a Colorado snowstorm on a ski trip -- I have never lived through a storm like the 1996 blizzard,” Boyer said.

Seeing that much snow on the ground was “amazing” for a self-described snow lover like Boyer. She pointed to the Blizzard of '96, along with the 1993 blizzard and Hurricane Floyd in 1999 as some of the foundational weather events in her childhood.

“I have always loved snow for as long as I can remember and these two storms during my childhood definitely helped spark the interest in weather,” she said.

From record snow to historic flooding

With feet of snow on the ground and a warmup in the forecast, AccuWeather meteorologists grew concerned that the already impactful storm could result in more devastating impacts even after it departed the U.S. The blizzard was one of four separate snow events that had occurred during early January, and some observers reported liquid equivalents in the snowpack ranging from 3 to 5.5 inches.

The liquid equivalent, or how much water is locked up in the snow and ice cover, refers to how many inches of snow will be produced by 1 inch of water, also known as a snow ratio.

More than a week later, a strong flow of warm air and dew points that reached the 50s created the necessary conditions for “unprecedented” snowmelt to occur across the mid-Atlantic, according to the NWS.

“Residents recall going to bed the evening of January 19th with over a foot of snow on the ground and waking up the morning of the 20th with bare ground,” the NWS said.

Some cities, including Norfolk, Virginia, topped 70 degrees Fahrenheit, while others like Philadelphia and Washington, D.C., recorded temperatures in the low 60s on Jan. 19. To make matters worse, a line of strong thunderstorms and heavy rain moved through the region on the same day.

The flooding would turn disastrous in Pennsylvania. At least 69 bridges in the state were destroyed or closed and many communities suffered significant flood damage. At least 20 people died amid the flooding, and 67 counties in Pennsylvania were declared federal disaster areas, according to a synopsis of the event from the U.S. Geological Survey. Major river flooding was reported throughout the mid-Atlantic and most notably in Pennsylvania where several rivers and streams established new record heights. 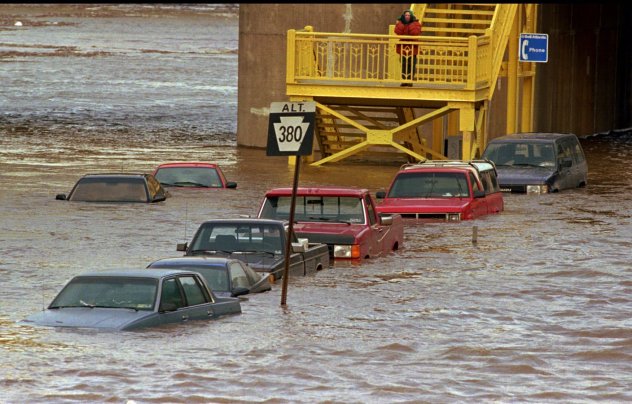 “The intense rainfall, combined with water from the rapidly melting snowpack, resulted in the generation of large volumes of runoff that moved quickly toward rivers and streams. Small and large watersheds responded rapidly to the intense rainfall and rapid snowmelt events, and, consequently, stages and discharges in streams and rivers throughout Pennsylvania peaked during the short time span of January 19-21,” the USGS said in its report.

The flooding disaster associated with the Blizzard of ’96 is often an afterthought perhaps because it was the blockbuster snowfall that captured the public’s imagination at the time, particularly in the Philadelphia area. Prior to the 1995-1996 snow season, during which the infamous storm occurred, Philadelphia had never seen a snowier season. Nearly half of the 65.5 inches of snow that fell in the 1995-1996 snow season came courtesy of the Blizzard of ’96. The 27.6 inches the storm brought on Jan. 7 remains the greatest single-day snowfall on record in the City of Brotherly Love.

In fact, most people in the Philly area that lived through that winter had never seen so much snow in one storm – or across an entire snow season, which spans from October through May. Before 1995-1996, the closest the city came to that staggering 65-inch total was way back in 1898-1899 when 55.4 inches was measured. However since then, the city has seen two seasonal totals that have eclipsed the 1995-96 season: In 2009-2010, 78.7 inches of snow piled up and in 2013-2014, the city tallied 68 inches of snow. However, for many from that region the Blizzard of ’96 endures as the most memorable blockbuster storm.