The weather will be less than ideal for those hoping to kick off the holiday weekend by heading outdoors in the Northeast.

Dreary, chilly start to holiday weekend breaks records across Northeast
When will summer weather return to the Northeast?

The unofficial start to summer is here, but for tens of millions of Americans across the Midwest, mid-Atlantic and Northeast, it sure hasn't felt much like summer.

AccuWeather forecasters had been warning of a dreary start to the holiday all last week, and that outlook has certainly come to fruition. Those traveling --AAA predicted 60% more travelers this year compared to last -- have had inclement conditions to navigate.

In the Northeast, daily high temperatures Saturday and Sunday were as much as 20 degrees below normal and broke record low maximum temperatures in some places. Add to that a soaking rainfall and the recipe for a holiday weekend spoiler is complete.

However, there is some hope that by Monday the pattern will brighten and temperatures will moderate a bit for some places.

The culprit has been a slow-moving storm making its way across the nation this past week. As the storm moved along, rain advanced eastward and soaked areas up to a few hundred miles north and south of I-80 in the Midwest and into the Northeast through Friday night.

At some of the interior mountain tops in the Northeast, it looked more like a mid-winter day rather than Memorial Day weekend as accumulating snow was reported Saturday morning. Nearly an inch of snow could be seen on webcams at Mount Snow, Vermont. A slushy coating was also caught at Stratton Mountain Resort in Stratton Mountain, Vermont. 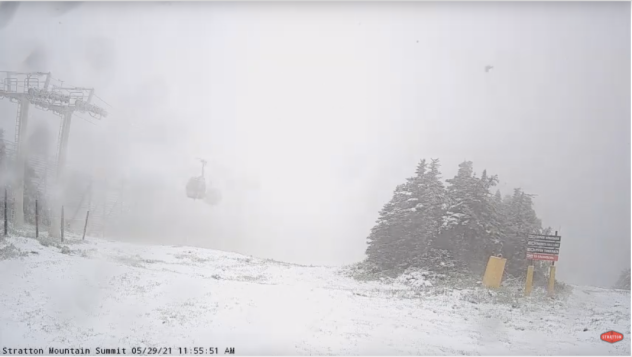 A bit of sleet and snow was observed in parts of Wisconsin and the Upper Peninsula of Michigan Friday morning. North of the precipitation area, freeze advisories were issued over the northern tier of the United States.

Unseasonably cold air generated by the storm's rain and breezes from the Atlantic Ocean and Canada not only had many people reaching for long sleeves and jackets but also broke record low maximum temperatures that have been in the books as far back as the middle 1800s.

By Saturday evening, Pittsburgh, Pennsylvania, broke its record for the record-low maximum temperature for the day. The city only reached 51 degrees, breaking the record set in 1897 of 54 degrees.

"This is about as cold as it gets this time of the year during the daytime," AccuWeather Senior Meteorologist Jesse Ferrell said.

Poor weather conditions put a damper on much of the holiday weekend for people with outdoor plans in the Northeast.

It has been a dry spring thus far across most of the Eastern US. While many areas needed a soaking rainfall, the Memorial Day weekend timing is not particularly optimal... pic.twitter.com/Ea2l5GszEs

"In less than 48 hours, conditions flipped from mid-August levels to early May or April in the Northeast from last Wednesday to Friday," AccuWeather Chief On-Air Meteorologist Bernie Rayno added.

Ocean water temperatures during Memorial Day weekend are traditionally not warm, and this weekend will be no exception. 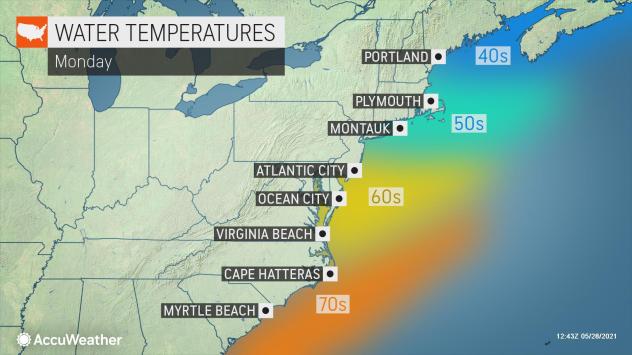 Surf temperatures will range from the 50s in eastern New England to the 60s along much of the mid-Atlantic coast. At these low temperatures, cold water shock is a real concern, and those venturing in the water should do so with extreme caution, avoid swimming alone and keep water encounters brief.

There is some hope for the holiday itself on Monday over a large part of the region.

"Memorial Day is likely to flip from cloudy and cool to bright and beautiful for the central Appalachians and even much of the mid-Atlantic coast," Rayno said.

"A general rule in late May is that when the sun is out, temperatures generally recover to average levels," Rayno added.

This means that temperatures are likely to recover to the 70s in most areas that will experience highs in the 50s and 60s much of the weekend. 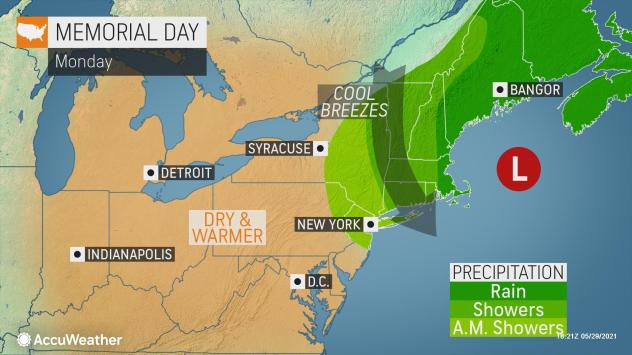 "While Monday may be the best of the three days over much of the Northeast states, that is not likely to be the case in much of New England and eastern Long Island," AccuWeather Senior Meteorologist Dean DeVore said.

The storm system is likely to take a turn to the north on Monday, say AccuWeather forecasters who had been warning about the potential for days.

Conditions are likely to be cloudy with rain and drizzle for at least part of Memorial Day in New England, soaking any outdoor ceremonies observing the holiday. The weather in Boston on Memorial Day could be worse than any of the days of the extended weekend.

A few lingering morning showers could threaten morning remembrance ceremonies in New York before conditions improve further for the afternoon.

However, the storm putting a damper on the holiday weekend will bring some benefits along its path, too. It delivered much-needed rain to parts of Montana, the Dakotas, northern Iowa, southern Minnesota and Wisconsin into Thursday morning. Before the storm arrived, the region was in the grips of conditions that ranged from abnormally dry, which is one step down from moderate drought, to exceptional drought, the highest level of concern on the U.S. Drought Monitor scale.

A thorough soaking will also be welcome news, in some respects, for communities farther to the east in the Midwest and even the Northeast, where pockets of abnormally dry conditions to severe drought exist, in the coming days.

The Northeast will not be the only part of the U.S. that may face unsettled and unfavorable outdoor weather conditions this weekend. 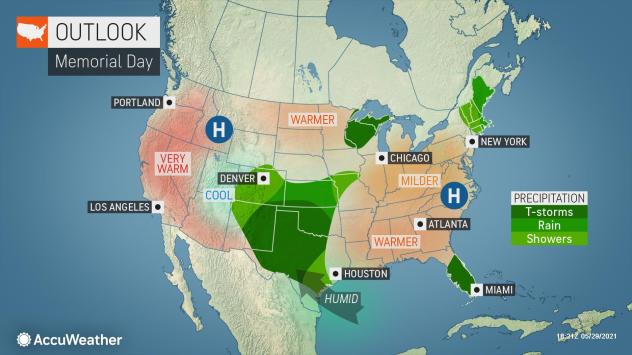 South Florida is likely to settle into its summer routine of morning showers on the Atlantic coast and afternoon thunderstorms over the central counties and Gulf Coast as the long holiday weekend progresses.

Farther west, showers and thunderstorms are forecast to frequent areas of the High Plains and to the eastern slopes of the Rockies Memorial Day, including the cities Denver, Boulder, Colorado Springs and Pueblo, Colorado. However, despite the risk of some wet weather, all-day rain is not anticipated in the region.

Most areas west of the Rockies are expected to be dry with building heat. People venturing outdoors are being urged by AccuWeather forecasters to take precautions to prevent blazes such as using caution when grilling and heeding all official warnings, including any around campfires.