All-time record heat, prolonged drought and devastating wildfires have plagued Europe this summer. With a change in season coming, AccuWeather forecasters have the answers on when needed relief will arrive.

An excruciating weather pattern has seized much of Europe this summer with all-time record heat, unprecedented drought and raging wildfires affecting all facets of life. Europeans hopeful that a change of the season will bring relief with it across the continent can turn to insight from AccuWeather’s expert meteorologists who have been studying what kind of weather conditions will prevail across Europe this autumn.

AccuWeather's long-range forecast team, which consists of meteorologists who collectively have more than five decades of experience in forecasting the weather across Europe, says the switch from summer to fall may not be noticeable to many Europeans, with warm, bone-dry conditions persisting through at least part of the season. Rain will arrive later in the fall in a few countries, but will it douse the parched regions that are in desperate need of water?

Read on to discover what to expect in the new season, which kicks off with meteorological autumn on Thursday, Sept. 1, and is followed three weeks later by the autumnal equinox on Thursday, Sept. 22, the official beginning of fall in the Northern Hemisphere. 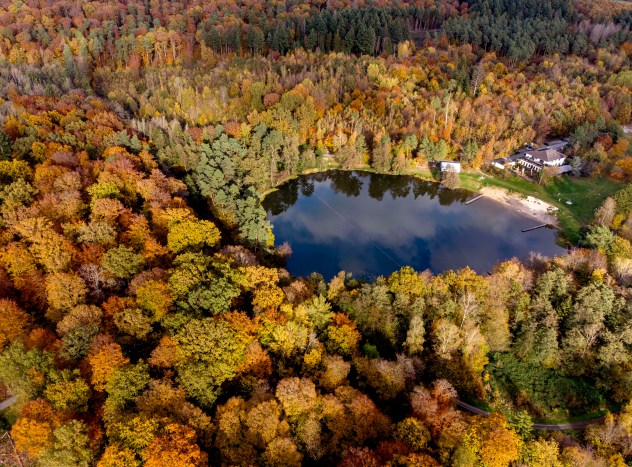 Summer warmth will slowly release its grip on the continent

To say Europe has suffered a hot summer would be a grievous understatement. The heat has been unrelenting and unprecedented and, sadly, has killed over 1,000 people in Spain alone.

Western Europe endured one of its most intense June heat waves on record, and the heat intensified further as the calendar flipped to July. During the heart of the summer, temperatures eclipsed the highest marks ever recorded from Portugal to France and the United Kingdom as well as many places in between.

Tyler Roys, a senior meteorologist at AccuWeather who routinely forecasts the weather across Europe, expects warmer-than-normal conditions to continue to be a trend across Western and Central Europe through a large portion of the fall months.

“Overall, the season will be warm, and it’s going to be a slow transition towards normal temperatures,” Roys said.

A dominating area of high pressure, which led to the extreme waves of heat this summer, is expected to remain firmly in place through at least the first part of the autumn. This will translate to temperatures averaging 2-4 degrees Fahrenheit (1-2 degrees Celsius) above normal levels across much of Western and Central Europe. 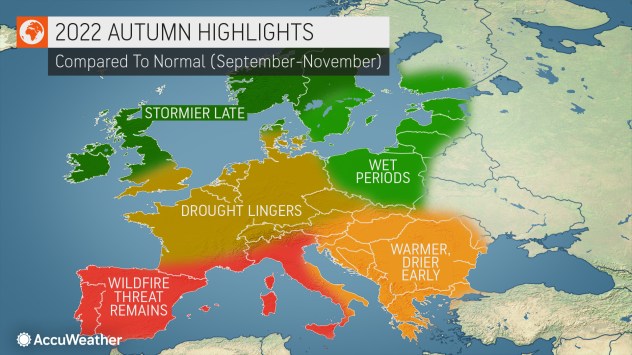 London, which recorded a staggering and historic 104-degree-Fahrenheit (40-degree-Celsius) temperature on July 19, typically experiences high temperatures in the 60s F (16-21 C) in September. As the autumn progresses, temperatures dip to around 50 F (10 C), on average, during November in the English capital.

Farther south, Paris typically begins September in the lower 70s F (21-23 C) before temperatures take a drastic dive during October and November. Madrid normally kicks off the fall around 80 F (27 C) before highs dip into the 50s F (10-15 C) by the latter portion of the season.

Roys noted that it will likely take until November for these areas and many other locales to experience temperatures closer to their normal marks.

Experts say the heat from the summer and continued warmth into the fall will have an impact on fall foliage across the region.

Roys pointed out that trees will likely lose their leaves earlier than normal, and fall colors will be less vibrant overall as a result of the prevailing weather pattern throughout the summer that will continue into the first part of fall.

Forecasters say that drought can also play a significant role in the display of fall colors, and there has certainly been no lack of dry weather across much of the continent this year.

Data released from the European Drought Observatory in July indicated that over 60% of the continent faced drought conditions. The drought has affected everything from energy production to agriculture, river transportation, shipment of goods and water usage. Devastatingly low water levels have hit some of the most vital rivers in Europe, including the Po, Thames and Rhine rivers, among others.

The water shortage 🚱of the Rhine river near #Bonn 🇩🇪 is quite visible when comparing #Sentinel2 🇪🇺🛰️images of August 2021 and August 2022 pic.twitter.com/RZ6YrWB7Jo

AccuWeather Meteorologist Rob Richards noted that the lingering effects of the dry summer will play a critical role in the carryover of warmth into the fall months.

When the ground is parched, all of the sun’s energy can go directly to heating the surface, as opposed to evaporating moisture in the soil. This can result in higher temperatures than what would have been recorded otherwise under more temperate conditions, especially during the early part of the fall when there is more daylight and the sun remains higher in the sky.

AccuWeather meteorologists say the fall outlook is not promising for any widespread drought-busting rainfall in the regions most desperate for water.

The same high-pressure system poised to keep warmth firmly in place through the first half of the season will also act to deflect storms away from the heart of Europe. This will result in drier-than-normal weather persisting in the zone from the Iberian Peninsula to France, Italy and even as far north as southern portions of the United Kingdom, forecasters say.

“This could be the worst drought for southern England, France and Germany in decades,” Roys said. On Friday, Aug. 12, the British government declared an official drought in parts of England following weeks of heat and dryness.

Roys noted that these areas of England endured their driest July on record, with records dating back to 1935. 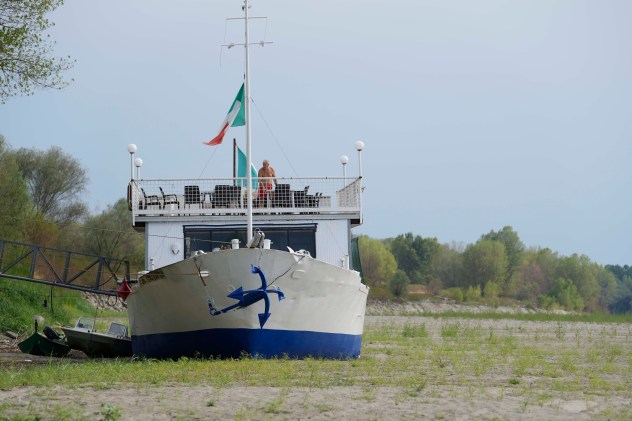 A boat restaurant lies on the dried riverbed at a tourist dock along the Po river in Ficarolo, Italy, Thursday, July 28, 2022. Italy's drought has dried up rivers crucial for irrigation threatening some 3 billion euros ($3.1 billion) in agriculture, according to Italian farm lobby Coldiretti. Italy's confederation of agricultural producers, Copagri, estimates the loss of 30%-40% of the seasonal harvest. (AP Photo/Luca Bruno)

Prolonged dryness will continue to put stress on food and water supplies, as well as the transportation of goods across Europe due to extremely low river levels. Agriculture stands to take a hit, too.

Amid the worst drought in 70 years, the Po River basin in Italy could “turn into a desert” with the dry pattern expected to continue this fall, according to Richards.

In mid-August, chilling reminders of past epic droughts across Europe were unearthed. “Hunger stones” were uncovered as water levels dipped in several major rivers, including the Elbe River. These boulders, some of which have inscriptions that date back to the 15th century, indicate low water levels and include warnings of famine from ancestors.

Raging wildfires have been an issue for months as a result of the tinderbox conditions, and meteorologists expect the continued dryness heading into September and October to prolong this hazard.

Wildfire season, which typically quiets down in September and early October across the south, is likely to continue well into this upcoming season because of how dry it’s been and will continue to be, AccuWeather Senior Meteorologist Alan Reppert explained. 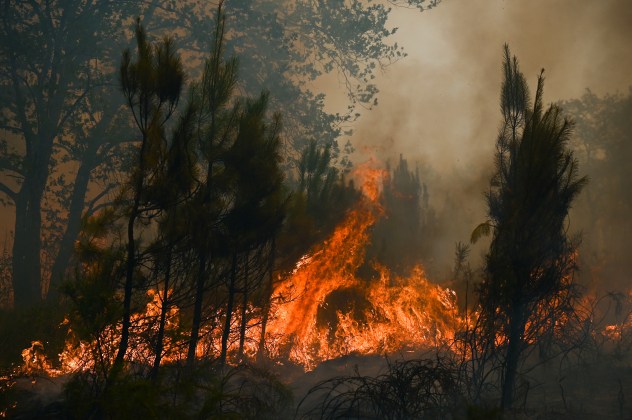 Areas spared from an elevated fire risk will be few and far between across the continent, especially early in the fall season, but, as AccuWeather Meteorologist Alyssa Smithmyer pointed out, there is one region that could have a lower risk of wildfires.

“The Baltic states have received more precipitation over the past few months than much of the rest of Europe. In terms of wildfires, compared to the rest of the continent, they may be in a safer spot,” Smithmyer said.

Storminess to mark second half of autumn in the north

Forecasters say it will take time for storms to make headway across the northern part of Europe as a result of the strong area of high pressure that is expected to remain in place through the first part of the season.

Once this breakdown occurs, however, more frequent rounds of precipitation are expected to sweep through northern portions of the continent during the latter part of the season.

While the London and Oxford areas of England could remain on the drier side, which is a continuation of the summer pattern, more storminess is likely across the rest of the United Kingdom, as well as portions of Ireland and Norway, according to Roys.

These areas will be buffeted by more frequent rounds of rain and temperatures could take a dive on the cooler side.

“Any cool shots during the second half of autumn will be more to the north, where storms will be more frequent late in the season,” Roys said, adding that by late November, the stormy, cool pattern could extend into England and the Baltic states.

Since the overall transition to stormier weather will be delayed, Roys said any impacts from windstorms would likely hold off until November. 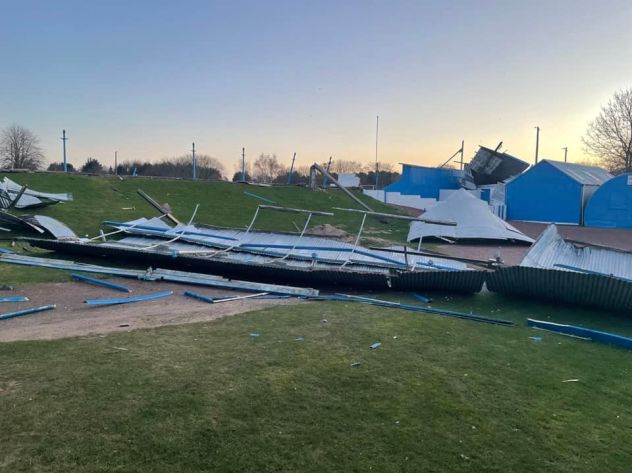 In 2021, Storm Arwen was a notable late autumn windstorm that became one of the worst in the United Kingdom's history. Arwen brought widespread destructive winds and cut power to more than 250,000 people.

In terms of impacts from leftover Atlantic tropical systems, AccuWeather meteorologists are predicting up to three impacts in Western Europe later this fall, which is right around average.

Southeastern Europe to experience various changes in the weather

Some of the most varied weather of the autumn season is expected to set up over southeastern portions of the continent, including Greece and the rest of the Balkans.

This part of Europe has been on the receiving end of some precipitation this summer, but there are several areas of ongoing drought, according to Roys.

Roys expects the early part of the fall to feature waves of warmth before a change in the weather pattern arrives later on.

“These areas may see an uptick in precipitation by the second half of the season,” Roys said.

AccuWeather forecasters say that a big wildcard in this part of Europe will be how the unusually warm waters of the Mediterranean Sea impact storm systems that cross this zone.

“The waters of the Mediterranean are running 9-11 degrees Fahrenheit (5-6 degrees Celsius) above normal,” Reppert said.

The full implications of what the warmer-than-normal Mediterranean waters will mean for the weather pattern across this part of Europe have yet to be determined. However, forecasters are pondering one possibility.

As long as the warmth continues into the early part of fall as forecast and water temperatures remain high, the chances may increase for a medicane to form later in the season, according to Roys. The term "medicane" is a combination of the words "Mediterranean" and "hurricane” and refers to a non-tropical storm that feeds off the warm waters of the Mediterranean Sea. Medicanes can produce high winds, driving rain and rough surf, which are all similar aspects of tropical storms.

This scenario, should it unfold, could be this part of Europe’s only hope for any relief from persistent dryness.

“Unless this scenario unfolds and there is significant rain from several Mediterranean storms, any drought in southern France, Italy and into the Balkans is not necessarily going to change this fall,” Roys said.