Europe’s brutal heat wave may be continent's worst since 1757

One of the most intense heat waves in over 200 years is unfolding across Europe with temperatures rivaling those in Death Valley -- one of the hottest places on Earth.

Experts say the potential of wildfires, energy conservation and fatalities are possible as temperatures soar and dry conditions persist.

AccuWeather meteorologists are warning of one of the most significant heat waves in western Europe in over 200 years, or a few decades before the Declaration of Independence was signed. The long-duration, extreme weather event could turn deadly across the continent.

The heat has already been baking Portugal and Spain with temperatures frequently topping 100 degrees Fahrenheit (38 degrees Celsius) since Friday, July 8. Sevilla, Spain, has been one of the hottest spots with the mercury soaring at or above 105 F (41 C) for nine consecutive days.

The temperature of 116.6 F (47 C) recorded in Pinhão, Portugal, on Thursday, July 14, if confirmed, could become the highest temperature ever recorded in the country in July. The country's current July record stands at 115.7 F (46.5 C) which was set in Amareleja in 1995.

On Saturday, the Spanish newspaper La Vanguardia reported that there were more than 360 deaths attributed to the heat wave in the country so far this week. Of those, the community of Madrid reported 22 deaths, while one 60-year-old municipal cleaning worker died Saturday during work.

This heat wave is expected to expand across Europe throughout the weekend and potentially through the end of the month for some areas. 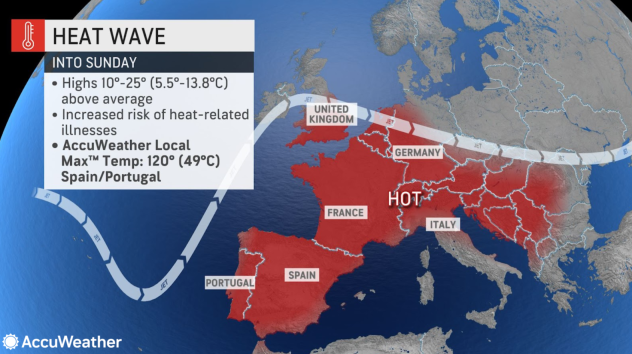 "There is concern that this heat could become a long-duration heat wave (20 or more days) for many locations from Portugal to central France and interior southeastern Europe as it could last for the rest of July and continue into August," AccuWeather Senior Meteorologist Tyler Roys said. This includes the valleys of Hungary, eastern Croatia, eastern Bosnia, Serbia, southern Romania and northern Bulgaria.

The severity of the heat could rival the 2003 heat wave when over 30,000 people lost their lives, both directly and indirectly, due to the heat, according to Roys. He added that this could be one of the worst heat waves in Europe since 1757. 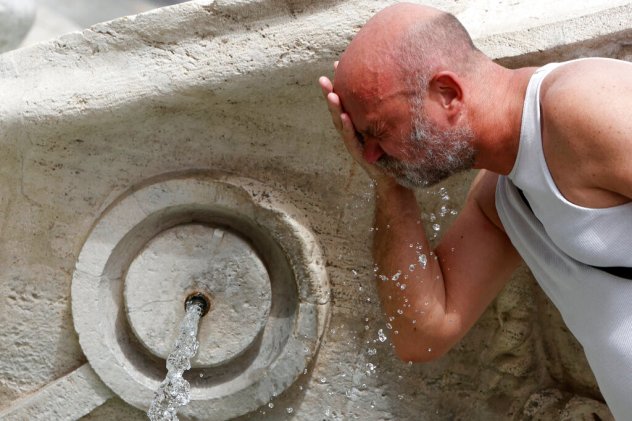 The source of the exceptionally warm air is Africa's Sahara Desert with heat projected to expand farther north and east each day, reaching Belgium, The Netherlands, Germany and the U.K. later this weekend.

"July all-time records are at risk of being approached, tied or even broken across Ireland and the United Kingdom," Roys said. "This includes individual cities such as Birmingham, Dublin, Manchester and York."

On Friday, July 15, the U.K. Met Office issued their first ever Red Extreme heat warning for next Monday and Tuesday, when the "exceptional hot spell" is expected to take hold and bring "widespread impacts on people and infrastructure."

Officials say that during this first-ever-used national heat wave emergency, "illness and death may occur among the fit and healthy - and not just in high-risk groups."

A new all-time record high could be set in the U.K. during the peak of the unprecedented heat. The current record in the country is 102 F (38.7 C), which was set in Cambridge Botanica Garden on July 25, 2019. Londoners could experience temperatures approaching the century mark during the peak of the heat early next week. 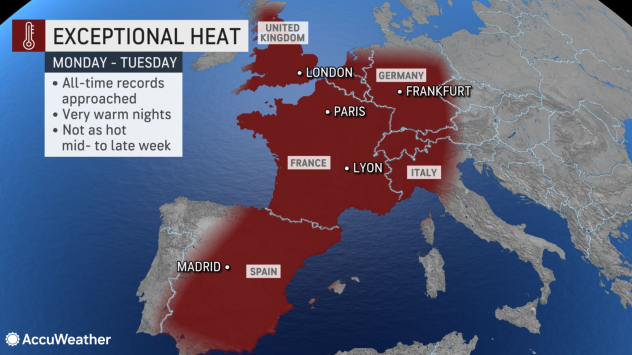 In Paris, temperatures early next week could come within a degree or two of 104 F (40 C). When temperatures reached this territory during a heat wave in 2019, officials allowed Parisians to cool off in the Trocadero Fountain near the Eiffel Tower. This measure could be taken again in the coming days.

Riders and spectators of the Tour de France should also brace for the abnormally high temperatures as the tour weaves its way across southern France after leaving the Alps. Spectators lining the roads should take the proper precautions to avoid heat-related illness, especially when roads are closed for cyclists as the temporary closures could limit access to some healthcare facilities, experts say. 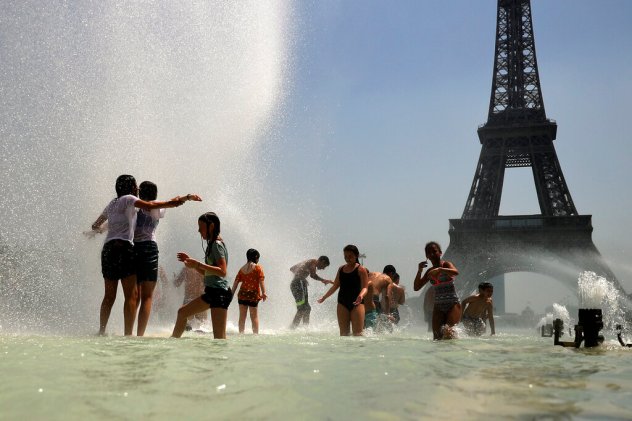 Youngsters cool off at the Trocadero public fountain in Paris, Wednesday, June 26, 2019. High temperatures are expected to go up to 39 degrees Celsius (102 Fahrenheit) in the Paris area later this week and bake much of the country, from the Pyrenees in the southwest to the German border in the northeast. (AP Photo/Francisco Seco)

The extreme temperatures are making it even more challenging for the thousands of firefighters working to slow down raging infernos across Portugal, Spain and France.

On Friday, the pilot of a firefighting aircraft died when his plane crashed during a firefighting operation in northeastern Portugal, near the country's border with Spain, according to the Associated Press (AP).

As of Saturday, more than 12,000 people have been evacuated in southwestern France near the towns of Landiras and La Teste-de-Buch in the Gironde region due to an out-of-control forest fire, Reuters reported. Firework displays scheduled for Bastille Day on Thursday, July 14, were canceled due to the elevated fire risk.

Temperatures more common for Death Valley, California -- touted as one of the hottest places on Earth -- will be possible in eastern Portugal and western and southern Spain during the height of the hot spell.

The AccuWeather Local Max™ temp is 120 F (49 C) in Spain and Portugal. For comparison, temperatures typically top out near 118 F (48 C) in Death Valley in July.

People planning to travel to Europe for vacation through the end of July should prepare for the heat and be ready to change plans if events are canceled and buildings are closed due to the extreme weather.

"Tourist destinations across Portugal are being closed for the safety of the public and, in some cases, due to nearby fires," Roys said. More closures are possible across Portugal, Spain and France due to wildfires and heat.

Meteorologists say people should be mindful of wildfire activity, especially those with poor respiratory health, as the smoke from the wildfires could produce poor air quality.

Adding further strain to residents and visitors amid the heat is that air conditioning is not used as widely in Europe as it is in the United States. Even where there are air conditioners, they may not cool down buildings as much as those in the U.S.

An initiative in Italy dubbed "operation thermostat" states that air conditioners cannot be set lower than 27 C (81 F) in an effort to conserve energy, according to Politico. Residents or businesses that do not comply with this new law could be fined roughly the equivalent of $500 to $3,000. 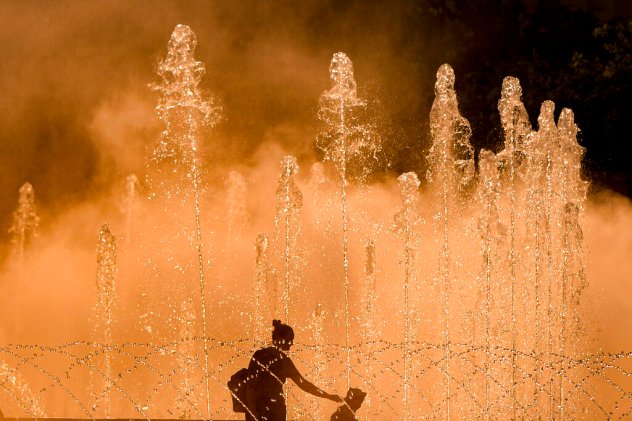 A woman holds a little girl's hand as she walks by city fountains at sunset, at the end of a very warm day, in Bucharest, Romania, Friday, July 9, 2021. (AP Photo/Andreea Alexandru)

Unfortunately, Mother Nature will provide little of her own natural cooling during the overnight hours.

"Many places will not have temperatures drop off very much at night," AccuWeather Senior Meteorologist Tony Zartman said. "Elevated temperatures at night prevent the body from recovering from the stress of the daytime heat. Without this recovery, the risk for heatstroke becomes much greater."

The widespread heat wave is not predicted to let up anytime soon with temperatures remaining well above average through next week across much of Europe, though the northern half of the continent should cool down by the middle to latter part of the week.

Long-term heat waves are uncommon in Europe, but they are not unheard of.

"Over the last 25 years, there have only been three long-duration heat waves to impact parts of Europe: 2003 (western and central Europe, 32 days), 2006 (western and north-central Europe, 35 days) and 2021 (Italy and southeast Europe, 21 days)," Roys explained. Last summer was also the hottest on record for Europe.

"The soil across Portugal to Germany is in the process of quickly losing whatever moisture it contained," Roys said. "This drying is not expected to let up but only intensify during the duration of the heat wave as little to no precipitation is expected across much of the region."

The ramifications of this may not be fully realized until the autumn harvest.