The dry spell is being called the country's worst in 70 years, and it has driven water levels so low in the famous Po River that a relic last seen in 1943 was revealed.

Northern Italy is experiencing one of its worst droughts in memory. Veuer’s Tony Spitz has the details.

One of Northern Italy's worst droughts in recent memory has dried up the country's Po River, unearthing relics that are typically covered up by the river's flowing currents.

The Po River, Italy's largest river at 405 miles long, is also the biggest reservoir of fresh water available in the country. The persistent drought, which is being called the worst in 70 years, threatens to challenge Northern Italy's supply of drinking water and make life difficult for farmers in the region.

In the northern village of Gualtieri, situated roughly between Florence and Milan, the river is so dry that a World War II-era barge has emerged from the river. The ship, known as the Zibello, is a 50-foot-long barge that sank in 1943. Normally, it is fully covered by the Po's waters. Now, much of the rusted ship has risen from the waters and is available for locals and tourists alike to gawk at. 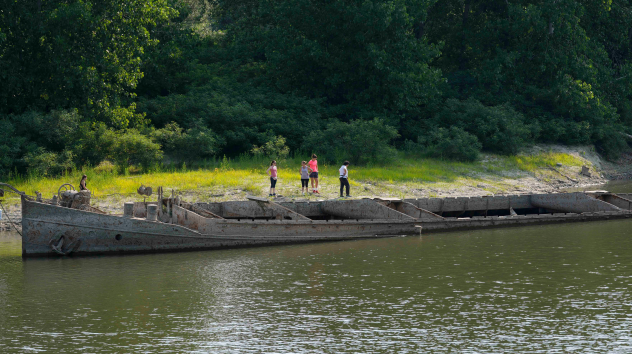 A barge dating back to World War II has re-emerged on the Po river in Gualtieri, Italy, Wednesday, June 15, 2022. Water is so low in large stretches of Italy's largest river that local residents are walking through the middle of the expanse of sand and shipwrecks are resurfacing, but authorities fear there'll be far greater consequences for farmers and local populations. (AP Photo/Luca Bruno)

“It’s the first time that we can see this barge,” amateur cyclist Raffaele Vezzal told The Associated Press as he hopped off his bike to get a glimpse of the unusual sight. Temperatures in Gualtieri have been in the low to mid-90s there the last 10 days or so, which is well above the normal of 82 for this time of year.

Elsewhere along the river, other smaller items are emerging from the depths for the first time. With large sections of the river's sandy floor now walkable, rocks, logs and large bones can be seen littering the ground.

A bone lies on Po's dry riverbed as parts of Italy's longest river and largest reservoir of freshwater have dried up due to the worst drought in the last 70 years, in Boretto, Italy. More photos: https://t.co/JHbZ30tm0A 📷 @GuglielmoMan pic.twitter.com/pOJCrbUFmD

The river is crucial for Northern Italy's farmers, who need the water to keep their plants alive and growing. Much of Northern Italy has not had rain for 110 days, and temperatures nearly 4 degrees Fahrenheit above average have scorched the bone-dry ground, according to The Associated Press.

“With such high temperatures... with no rain, and it seems that there won’t be rain in the coming days, the situation is catastrophic,” said Martina Codeluppi, a 27-year-old farmer from the rural Italian village of Guastalla, told the AP.

Farmers in Northern Italy grow and produce delicious crops, including wheat, tomatoes, rice, watermelon, pumpkins and the region's renowned grapes. Wheat, already at low supply globally due to the war in Ukraine, is a particularly fragile crop as it does not get irrigated and depends solely on rainfall.

Numerous hydroelectric plants may also be unable to generate power as the river, which usually has 476,000 gallons moving through any given part of the river per second, has fallen to what is comparatively a trickle: just 80,000 gallons a second. According to The Associated Press, 55% of the hydropower generated in Italy comes from the Po or one of its tributaries.

It is expected that more natural gas will need to be used to make up for the drop in hydroelectric production, something that would lead to increased carbon dioxide emissions.