July 5 (UPI) -- Italy, which is suffering the worst drought in 70 years, has declared a state of emergency for five northern regions. 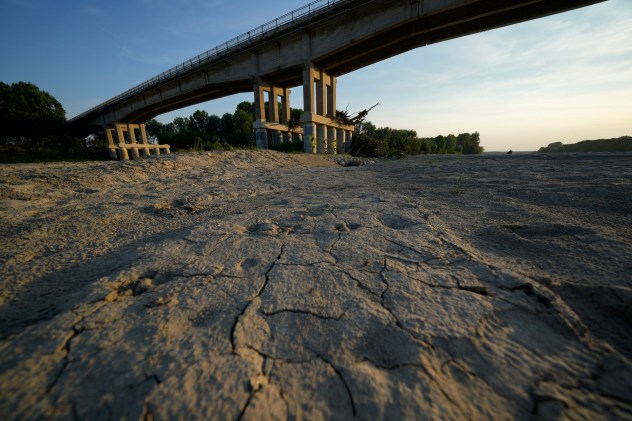 Dry cracked land sits under a bridge in Boretto on the bed of the Po river in Italy, Wednesday, June 15, 2022. The drying up of the river is jeopardizing drinking water in Italy's densely populated and highly industrialized districts and threatening irrigation in the most intensively farmed part of the country. (AP Photo/Luca Bruno)

"There are two categories of causes for this water crisis: One is the rainfall deficit of the last three years. There has been a low level of rainfall, of course not just this year but also in previous years," Draghi said at a press conference Thursday. "The general rise in temperatures is also contributing; there is no doubt that climate change is having an effect."

The hardest hit area is along the Po River, which runs across the northern part of Italy from the Pian del Re of Monte Viso to the Adriatic Sea near Venice, with water levels down three quarters from normal.

The Po River, the longest in Italy, serves more than half the country's agriculture and livestock, according to European Commission data, with farmers groups predicting their harvests will drop by more than 30%.

"For the Po basin, this is the most serious water crisis of the last 70 years, according to analysis by the Po River District Basin Authority," Draghi said.

Italy's drought emergency is also affecting the central part of the country with water levels on the Arno, Aniene and Rome's Tiber River dropping by half.

A number of cities, including Milan, have shut down their decorative fountains, while many areas along the Po River are restricting water use during the day and shutting-off water at night. Some towns are having to have water trucked in.

Italy's Council of Ministers, which will appoint a special commissioner to tackle the water crisis, has set aside $37.5 million to help each of the regions deal with the water shortage and to address any problems with water infrastructure and leakage from the Po River.

"This is why, in Italy, there is an usually high level of leakage, of water being lost: we're talking about 30% or more," Draghi said. "To give you an idea, the total in Israel is 3% and in other European countries 5% to 8%. An emergency plan is undoubtedly needed to deal with this emergency now."