London could reach a scorching 100 degrees Fahrenheit, while other major cities such as Birmingham and Manchester are forecast to challenge all-time July records.

As temperatures soar throughout Europe, the United Kingdom is responding with the first "red" warning for extreme heat that the country has ever issued.

For the first time ever, the United Kingdom Meteorological Office (UK Met Office) has issued a red extreme heat warning for parts of "central, northern, eastern and southeastern England" as unprecedented warmth is set to spread across the U.K. on Monday and Tuesday.

An amber extreme heat warning was already issued for much of England and parts of Wales that will run through July 19, according to the UK Met Office. "Today the amber areas are also being extended to cover Cornwall, West Wales and parts of southern Scotland," the Met Office said on Friday.

The Iberian Peninsula has been ground zero of what could end up being the worst heat wave to strike the European continent in the past 200 years. Temperatures in Spain and Portugal could reach up to 120 degrees Fahrenheit (48.9 C), with the warmth expected to spread farther north into the United Kingdom and eastward as far as the valleys of Hungary, eastern Croatia, eastern Bosnia, Serbia, southern Romania and northern Bulgaria.

In the U.K., it is highly possible that the country's all-time high-temperature record, 38.7 degrees Celsius (102 F), which was set in Cambridge Botanica Garden on July 25, 2019, falls by the end of the week.

Temperatures in London are typically around 21 degrees Celsius (70 F) during mid-July.

The forecast heat led the UK Met Office to issue the red extreme heat warning, which says that the upcoming "exceptional hot spell" is expected to take hold and bring "widespread impacts on people and infrastructure," with illness and death possible among even fit and healthy individuals.

"Exceptional, perhaps record-breaking temperatures are likely on Monday, then again on Tuesday. Nights are also likely to be exceptionally warm for the U.K., especially in urban areas," the warning states. Unlike in suburban and rural areas, the paved surfaces covering urban locations can trap heat more easily and raise temperatures, in a process known as the urban heat island effect. The heat warning covers an area that includes the city of London. 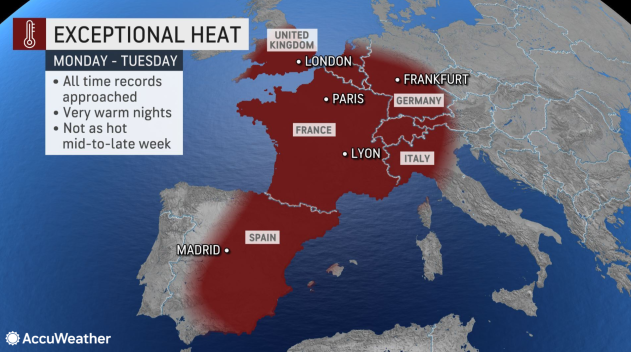 In preparation for the intense heat, London's Hammersmith Bridge, which is currently undergoing significant repair, has been covered with giant pieces of foil in an attempt to stop its supporting chains from heating up to dangerous levels that could impact the bridge's structural integrity, according to the BBC.

The bridge was damaged during a 2020 heat wave when temperatures caused cracks in the bridge's cast iron to expand. The bridge will need to close if its supporting chains reach a temperature more than 64 F (18 C).

The UK Met Office is warning that the heat wave may cause a series of problems, including the potential for power outages and the loss of essential services like water and cellular data, increased danger of water safety incidents at busy beaches, as well as delays and cancellations to rail and air travel.

The Mayor of London, Sadiq Khan, has initiated the Severe Weather Emergency Response Protocol (SWEP) to support those without houses who will be forced to sleep on the streets during the heat wave. Typically, the protocol is triggered for cold conditions; however, the potentially record-setting heat wave has prompted unprecedented action.

Heat waves, a deadly hazard in the United States, are often even deadlier in Europe, where air conditioning simply does not exist in most houses and communities. This heat wave could challenge or surpass the 2003 heat wave that enveloped Europe in record heat, killing over 30,000 people both directly and indirectly.

"For me, it was a shock when I moved to the U.S. [Air conditioning] doesn’t exist in Europe, no. Not even in Spain or Italy. It doesn’t work like that," said Dr. Agne Kajackaite, a behavioral economist at the WZB Berlin Social Science Center.

Both locals and tourists visiting Europe will need to find ways to stay cool during the heat without relying on air conditioning, access to which will be spotty at best.

Two families in London, England, decided to beat the heat wave by lobbing water balloons at each other. The epic battle began on July 11 and will continue until the balloons run out.

Two families in London chose to beat the heat by lobbing water balloons over their respective fences, getting each other soaked while having a good time. That might not be an option for everyone, though.

"Some of the easiest ways to lessen the risk of heat-related illnesses include drinking plenty of water or electrolyte beverages, limiting physical exertion and wearing light-colored clothing," Duff said.

Correction: A previous version of the story misstated the direction that the heat would be spreading. The heat is forecast to spread to the east of the U.K., not the west.

Dramatic photos show tree burning from the inside out

Ian enters the Gulf of Mexico, new watches and warnings issued for southeastern US