Carved into the side of a rock, the phrase emerged as water levels continue to drop in one European river, and the five-word translation delivers a warning from ancestors of what’s to come.

As Europe's drought continues to worsen, the water levels in rivers have dropped significantly, revealing chilling warning messages from more than a century ago.

Olaf Koens, a local German reporter, shared photos on Twitter early last week of boulders known as "Hungersteine," or "Hunger Stones," which have surfaced recently in many European rivers.

Dating back to the 15th century, the messages on these boulders marked record low water levels and were "horrifying" warnings from ancestors about famine, Koens shared in his tweet.

Politico journalist Aitor Hernández-Morales also shared photos of the hunger stones on his Twitter. In the photo, the low water levels of the Elbe River, which starts in the Czech Republic and goes through Germany to the North Sea, allow the boulders with the writing “Wenn du mich seehst, dann weine,” to be seen. Translated, the message reads, "If you see me, weep." 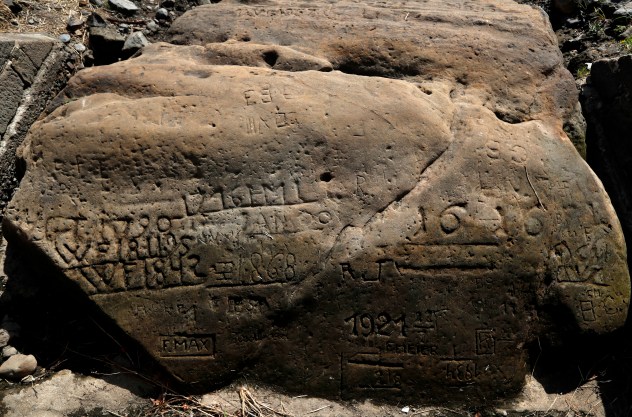 One of the so-called "hunger stones" exposed by the low level of water in the Elbe river is seen in Decin, Czech Republic, Thursday, Aug. 23, 2018. The low level of water caused by the recent drought has exposed some stones at the river bed whose appearances in history meant for people to get ready for troubles. They are known as the "hunger stones" and they were chosen in the past to record low water levels. (AP Photo/Petr David Josek)

"The basic inscriptions warn of the consequences of drought. It expressed that drought had brought a bad harvest, lack of food, high prices and hunger for poor people," Czech researchers wrote in a 2013 study, explaining that these stones are "chiseled with the years of hardship and the initials of authors lost to history."

The ongoing drought in Europe is expected to be one of the worst in 500 years, surpassing the 2018 drought, scientists at the European Drought Observatory told Sky News last week.

According to the Observatory, at least 47% of Europe is in drought warning conditions, the second of the three drought categories. Additionally, at least 17% of Europe has moved into the most severe "alert" state, meaning the dry soil is now affecting plants and crops.

The lack of water in reservoirs and rivers now means that rainwater is needed more than ever. And it isn't just the Elbe River that is low on water. 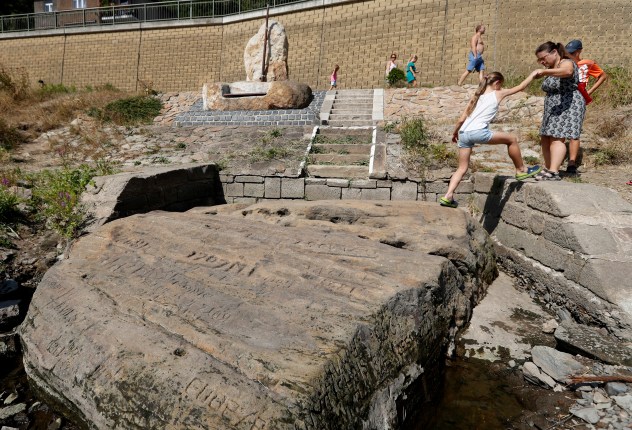 People visit one of the so called "hunger stones" exposed by the low level of water in the Elbe river in Decin, Czech Republic, Thursday, Aug. 23, 2018. (AP Photo/Petr David Josek)

According to German media outlet Deutsche Welle (DW), the extended heat, lack of rainfall and prolonged drought across Europe have caused multiple major rivers to dry up. Water levels in the Rhine River, one of the busiest waterways in the world as it flows from the Swiss Alps to the North Sea, are extremely low.

The low-water levels in the Rhine have snarled supply chains and created more problems for an already-struggling economy in Europe.

According to an analysis by CNN Business, container ships will have to reduce their load by at least 30% in order to pass through the obstructions the low-water levels have created in the Rhine River.

Henri Patriot, an oil analyst at UBS, told CNN Business the low water levels in the Rhine are "challenging shipments of energy products, which is aggravating the commodity supply situation in Europe."

As the drought continues to tighten its grip across Europe, other major rivers are drying up as well. For the first time in nearly 50 years, the source of London's iconic River Thames has dried up, according to the director of policy and science at the Rivers Trust, Dr. Rob Collins, The Guardian newspaper reported.

In June when water levels receded in Italy's Po River, the country's largest river, a World War II-era barge was unearthed. More recently, a fisherman along the Po River discovered a submerged bomb that dated back to World War II. Military experts safely defused over 500 pounds of explosive material before the bomb was detonated in early August.