Traffic was halted, railroad lines were shut down as was the airspace above -- and some 3,000 people were ordered to evacuate ahead of the big explosion, which was caught on camera.

Bomb detonated after being exposed in riverbed

An unexploded bomb from World War 2 was detonated by the Italian Army in Borgo Virgilio, Italy, on Aug. 7.

Fishermen along Italy's Po River made a startling discovery when a previously submerged bomb dating back to World War II was unearthed in the parched riverbed. The country and its vital Po River, the biggest reservoir of fresh water available in Italy, are facing their worst drought in 70 years.

Over 500 pounds of explosive material were safely defused by military experts before a controlled detonation of the bomb was carried out on Sunday, Aug. 7, according to Reuters. The bomb, weighing 1,000 pounds (450 kilograms), was discovered near the northern village of Borgo Virgilio on July 25.

The difficult disposal operation warranted the area's airspace to be shut down, as well as traffic to be halted on that stretch of waterway and nearby railway lines and state roads, Reuters reported. 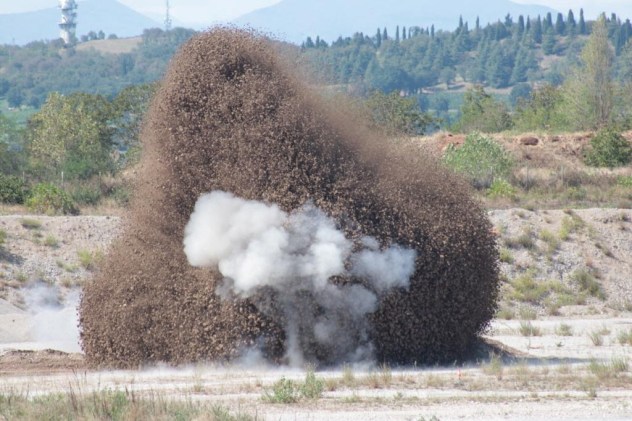 Approximately 3,000 people in the surrounding area were told to evacuate before the bomb was cleared. Borgo Virgilio's mayor stated that not all of the residents were initially cooperative with the evacuation but that everyone was persuaded to leave in the days leading up to Aug. 7.

The war relic is the most recent find in the Po River which has dried up amid a scorching and parched summer. The extreme drought has unveiled everything from now walkable rocks and logs to large bones, a 50-foot-long barge and startling images from space.

The river, which runs 405 miles across northern Italy, has long been used as a necessary resource for drinking water, regional agriculture, fishing and hydroelectric power. The valley that the river flows through produces approximately 40% of Italy's food, including soy, corn and rice.

Latest estimates put the seasonal harvest loss at 30-40% as a result of the unprecedented weather pattern, The Associated Press (AP) reported.

A July 2022 Europe drought report issued by Copernicus's Global Drought Observatory stated that the Po River basin is facing the highest level of drought severity, as well as a record-breaking intrusion of salt water. Where the Po River meets the Adriatic Sea in Venice, an exchange of fresh and saltwater occurs, as is typical for deltas. However, due to the low freshwater levels flowing from the Po River into the Adriatic Sea, salty seawater has encroached farther inland than ever before, creating an agricultural and drinking water crisis.

Area rice farmers are worried that the lack of water and subsequent rise in salinity could permanently damage the soil and impact future harvests, according to The AP.

This is the sixth water emergency for the Po River basin in 20 years, according to the European television news network, Euronews.

In early July, the Italian Government declared a state of emergency across the Emilia-Romagna, Friuli Venezia Giulia, Lombardy, Piedmont and Veneto regions due to drought and extreme temperatures overtaking the area.

Temperatures soared to 100 F (38 C) in Milan, Italy, in late July as the heat wave was underway. That high mark was set after scorching heat in June led to an average temperature that was 6.5 degrees Fahrenheit (3.6 C) above normal in Milan, and July's heat wave, which was the worst in 200 years in Europe, led to temperature departures up to 7.1 F (3.9 C) above average for the month.

Some locations along the Po River have not received rainfall for more than 120 days, according to the Po River Observatory.

"It could take years to recover from the historically low river levels being recorded this summer across parts of northern Italy," AccuWeather Meteorologist Thomas Geiger explained.

AccuWeather's team of long-range international forecasters do not see a promising trend in the weather pattern across much of Europe heading into the fall. A full Europe autumn forecast will be released on AccuWeather.com on Wednesday, Aug. 17.

Mystery sinkhole ranks among deepest in the world
Ancient 'ghost footprints' discovered date back 12,000 years
Deadly flooding after summer’s worth of rain deluges Seoul in 48 hours