Downpours triggered flash flooding that wreaked havoc in the South Korean capital and left at least nine people dead across the country.

A tremendous deluge overwhelmed portions of South Korea earlier this week as flash flooding swept through major metropolitan areas and left deadly damage in its wake.

At least nine people were killed in South Korea as a result of flooding as of Wednesday, according to The Associated Press.

Three of the confirmed fatalities occurred in southern Seoul Monday night when rescuers were unable to reach two women and a young girl trapped in their flooded basement apartment. Two people also died in a nearby district, one from drowning and one from electrocution, the AP reported. At least six people remain missing.

In the nearby cities of Gwangju and Hwaseong, torrential rainfall triggered deadly landslides. Over 150 hiking paths were closed in Seoul and the Gangwon province as a result of the landslides, and nearly 50 cities and towns were placed under landslide warnings, according to the AP.

AccuWeather forecasters say additional heavy storms are likely through Thursday which will worsen ongoing flooding concerns and hinder cleanup efforts. The rain will add to flooding woes after heavy thunderstorms unleashed torrential rainfall that quickly overwhelmed portions of the Korean Peninsula from Monday into early Tuesday, local time. One of the hardest-hit areas was the South Korean capital city of Seoul.

Streets and sidewalks turned into ponds and even raging rivers as heavy rainfall unloaded on the city. Floodwater levels rose throughout Monday and into Tuesday as a firehose of water blasted the region.

Water poured into subway stations, filled underpasses of major roadways and the basements of buildings and homes. Some residents who were caught outdoors in flooded areas were forced to wade to safety in thigh-deep water while cars left abandoned on low-lying roadways were covered up to windshields or even roofs. The force of the floodwaters was evident in photos of the aftermath that showed vehicles that had been swept up over sidewalks.

Nearly 800 buildings were damaged as a result of the flooding and over 1,300 people were forced to evacuate, according to Korea's Ministry of the Interior and Safety. 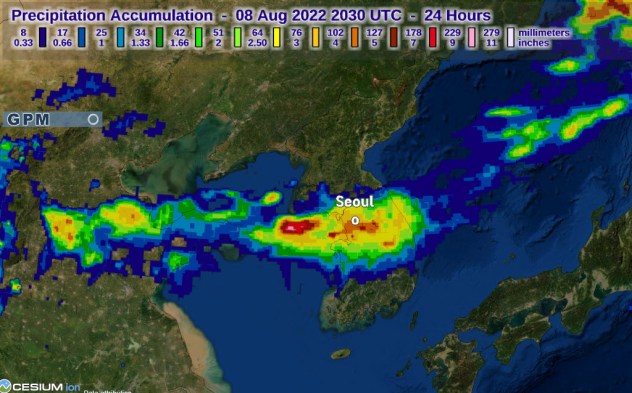 The heart of summer is typically the wettest part of the year for South Korea. Throughout July and August, Seoul averages about 17-18 inches (430-460 mm) of rain in total. From Monday into Tuesday evening, a general 4-6 inches (100-150 mm) of rain fell across much of northern South Korea, but totals soared tremendously higher in a few locations.

One station in the Seoul area recorded more than 18 inches (457 mm) of rain during the first part of the week. In downtown Seoul, rain poured down at a rate of 5.5 inches (140 mm) per hour at one point Monday night, the city's highest hourly rain rate since 1942.

The troublesome front is set to stick around for much of the week, triggering bouts of torrential rainfall.

"The front will remain stalled nearby [through] Thursday which will bring additional rounds of rain and some downpours," Nicholls said.

"It should briefly dry out Friday into the weekend, but rain, some locally heavy, can return early next week," Nicholls cautioned.