The massive blaze has torn through over 60,000 acres and claimed the lives of four people and impacted countless wildlife as firefighters continue to make progress containing the fire.

Why storms are so dangerous in wildfire zones

The largest and most deadly wildfire of the year in California has claimed its fourth victim, a veteran fire lookout who's been on the job in the middle of the blaze.

As the McKinney Fire continues to burn through the northern part of the state, one of four people killed in the massive blaze was Kathy Shoopman, 74, the Buckhorn-Bally fire lookout at the Klamath National Forest, United States Forest Service officials confirmed Monday. Starting as a lookout in the 1970s, Shoopman passed away in her longtime home as the fire swept into the Klamath River community.

"She had the loveliest, sweetest voice," Klamath National Forest supervisor Rachel Smith told NPR. "Many of our fire personnel found her voice to be a very comforting voice to listen to."

A resident of Klamath River for nearly five decades, Shoopman had been the Buckhorn lookout since 1993.

"We share this sorrow with each and every one of you...we will find many ways to honor Kathy's life and service and keep her spirit in all of our lives," Klamath National Forest officials shared on Facebook. 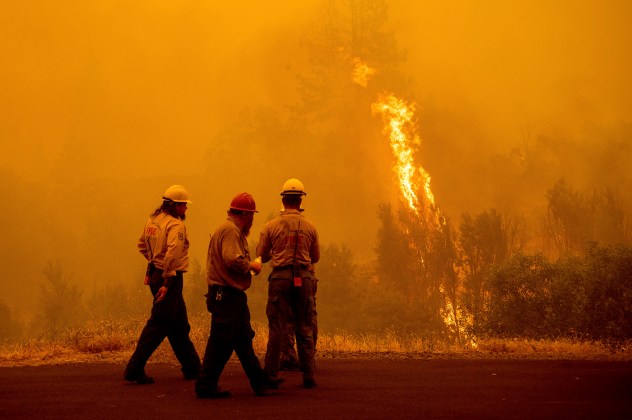 Shoopman was known for her pinpoint accuracy in identifying the location of new fire starts and in 2015 was even named “Lookout of the Year.”

“When Kathy called in a smoke, they knew it was spot-on,” Tom Stokesberry, a spokesperson for the Forest Service’s northern operations division, told the San Francisco Chronicle.

Burning since July 29, the McKinney Fire has laid waste to over 60,000 acres of land thus far in Siskiyou County and was 75 percent contained as of Thursday morning. Over 3,000 firefighting personnel have been out battling the raging fire this week.

Fire Behavior Analyst Dennis Burns with the California Incident Management Team said during a Monday update that "intense heat" prevailed in several sectors of the fire, including the southwest corner visible from the city of Fort Jones. A red flag warning remained in place for the area encompassed by the fire.

Burns also stated that an "unstable atmosphere" has hampered the continued fight against the fire, pointing to quick-moving thunderstorms that came through the area. While the small bit of rain was not enough to have an effect on the fire, Burns said that lightning strikes became a concern.

Due to the increase in containment over the past week, going to 75 percent from a previous zero percent-contained incident, the Siskiyou County Sheriff's Office allowed residents in several portions of the fire's east end to return home on Monday afternoon. The office reminded residents to remain cautious of potential hazards and of personnel working on the fire's containment. 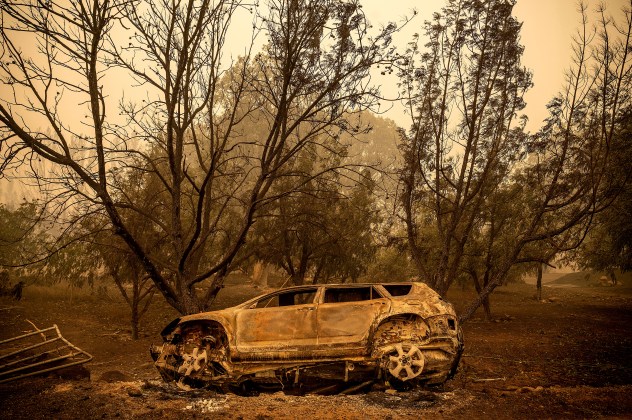 A scorched vehicle sits next to a driveway as the McKinney Fire burns in Klamath National Forest, California, on July 31, 2022. (AP Photo/Noah Berger)

Highway CA-96, the main artery that runs through much of the fire zone, remained closed, and all prior evacuations and warnings from the Sheriff's Office still stood as of Monday.

Along the Klamath River, the McKinney Fire has also caused local wildlife to suffer.

On Friday near Happy Camp, along the main stem of the river, droves of dead fish were found by the local Karuk Tribe. Area biologists believe that a flash flood, brought on by rains over the fire area, created a debris flow that entered the river.

This debris dropped the Klamath River oxygen level to zero on Wednesday and Thursday night, according to readings from a water quality station. The count of fish deaths along the 50-mile stretch "kill zone" in the river is now up into the tens of thousands, according to local observations.

Fish of all species were found deceased by the Karuk Tribe, which shares an adoration for Klamath River salmon with the area's Yurok Tribe. The blow to the salmon population comes to a species already in crisis in the region, suffering from low flows in the Klamath as well as from parasites in recent years.