The hottest place on Earth was doused with a year's worth of rain in just three hours on Friday, stranding more than 1,000 people as floodwaters washed out roads and buried vehicles in debris.

Heavy thunderstorms on Friday dumped nearly a year's worth of rain over the Death Valley National Park in just three hours, resulting in flash flooding that damaged dozens of vehicles, closed roads throughout the park and trapped roughly 1,000 visitors and staff, officials said.

"Rain this weekend was a historic event," the National Park Service (NPS) said. "Park roads are expected to remain closed for days to months depending on the severity of damage."

At the hottest place on Earth, the normal annual rainfall is 1.90 inches, and the normal August rainfall is only 0.10 of an inch, according to AccuWeather Senior Meteorologist Bob Smerbeck. On Friday, the weather station located in the park measured 1.46 inches of rain, falling just drops shy of the all-time record of 1.47 inches, which fell in Death Valley on April 15, 1988.

“Entire trees and boulders were washing down,” John Sirlin, a photographer who was in the park on Friday, told The Associated Press. “The noise from some of the rocks coming down the mountain was just incredible.”

This extreme weather event is being considered a "once-in-a-thousand-year flood," meaning that in any given year, there is a 0.1% chance of this type of flooding event occurring in Death Valley. 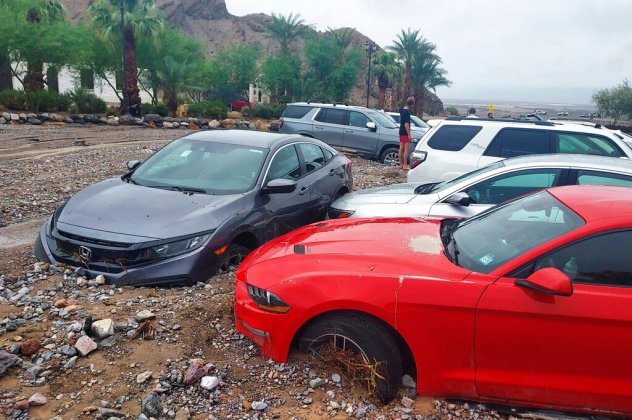 Park officials estimated about 60 vehicles had been buried in debris from the flash flooding, with roughly 500 visitors and 500 park employees stranded. No injuries were reported.

Due to the dangerous driving conditions, all roads within the park were closed. The roads were still closed as of Monday morning.

"Many miles of roadway are known to have moderate to severe asphalt damage with hundreds of miles of roadways impacted by debris," the NPS said. "Road conditions are still being assessed, as damage makes access to some areas impossible by vehicle."

One of the main roads in the park that was closed included State Route 190, which stretches from Olancha to Death Valley Junction. Video from the California Department of Transportation showed floodwater pouring over the route just west of the park entrance. 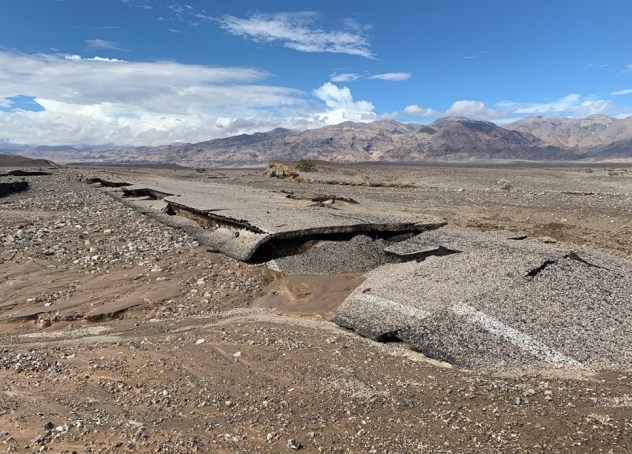 Remnants of the Beatty Cutoff road, one of the countless areas of severe road damage in Death Valley National Park. (NPS/M.Clark)

As of Saturday afternoon, most of the stranded visitors were able to leave the park, according to NPS officials. Visitors were taken out of the park via law enforcement escorts, who aided the exits by helping avoid undercut pavement and asphalt that was at risk of collapsing. 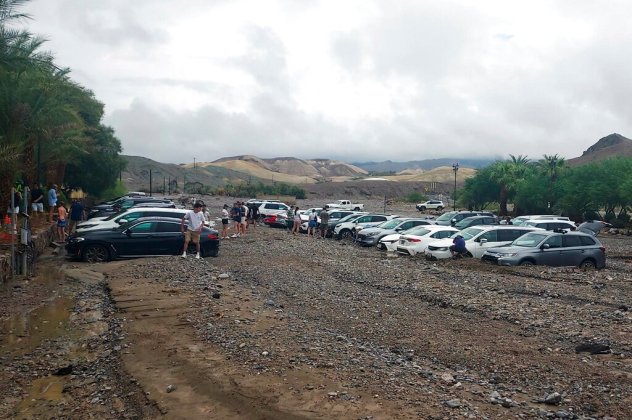 The incident comes seven years after a historic flooding event in Death Valley that caused catastrophic structural damage, including the ongoing closure of guided mansion tours at landmark Scotty's Castle.

Additional rainfall will be possible this week as another surge in moisture from the monsoon expands over parts of California. Any rainfall in or around Death Valley could spark additional rounds of flash flooding and create more challenges for crews working to clean up following the recent record rainfall.

US gets first Winter Storm Warning of the season