As the Atlantic enters the third month of hurricane season, AccuWeather forecasters warn that just because there's yet to be a hurricane doesn't mean the season can't turn on a dime.

By the time the third month of the hurricane season began on Aug. 1, the Atlantic basin had long gone quiet, without any tropical activity at all since just prior to the Fourth of July holiday. However, there have been recent signs that the basin may soon spring to life as the heart of hurricane season approaches as a disturbance moved through the open Atlantic. While development of this is far from certain, it may be the first step toward an increase of tropical activity in the coming weeks.

After the short-lived Tropical Storm Colin weakened into a tropical rainstorm on July 2, within hours of its formation, the Atlantic Basin entered a calm period with no named storms that has lasted for more than a month. A significant lull during the Atlantic hurricane season is rare but by no means unheard of.

There have been four other times over the past 30 years in which the Atlantic basin has been devoid of named storm activity between July 3 and Aug. 3 -- 1993, 1999, 2000, and 2009, according to data analyzed by Colorado State University meteorologist Philip Klotzbach.

As of Aug. 1, the 2022 hurricane season was trailing the 2021 season by a total of just two named storms, though some of last year's early-season storms, like Elsa, which made landfall in Florida as a hurricane and then zoomed up the Eastern Seaboard as a tropical storm, were far more impactful than this year's tropical activity has been. And as the last two years have proven, the third month of hurricane season can be extremely active. 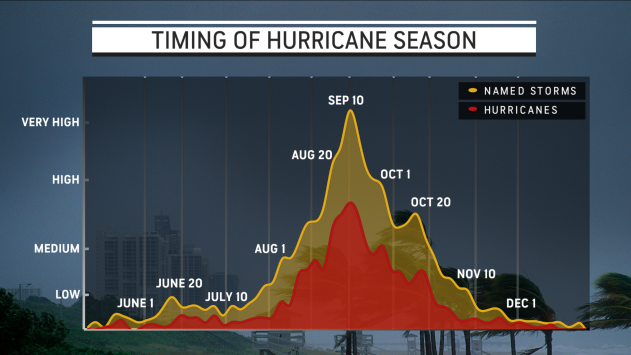 Last year, four named storms were spawned during the month of August, including the powerful Hurricane Ida that devastated communities from Louisiana to New Jersey at the tail end of the month.

A year earlier, the devastating Hurricane Laura made landfall along the Gulf Coast as a Category 4 storm, the 12th named tropical system of the season. And in 2019, Hurricane Dorian, one of the basin's strongest-ever hurricanes, formed in late August before making its destructive landfall in the Bahamas on Sept. 1 of that year.

All of which is to say that people should not let their guard down, AccuWeather forecasters caution. 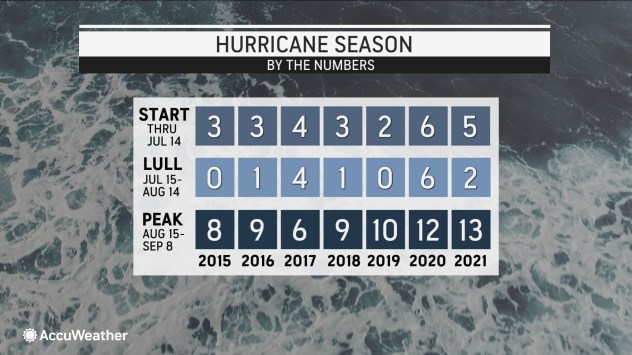 A chart showing the number of named storms during the start, lull and peak of the Atlantic basin's hurricane season since 2015.

"August comes in like a lamb and goes out like a lion in terms of tropical activity," AccuWeather Senior Meteorologist Alex Sosnowski said, invoking the old expression used to describe the weather extremes of the month of March.

This week, forecasters say the basin may begin to show signs of life, following the lengthy lull in activity. A tropical wave that has recently emerged from the west coast of Africa is the feature being closely monitored.

"As this wave tracks westward over the next few days, there are signs that it may develop and organize further into a tropical depression or storm as it moves into the central Atlantic later this week," AccuWeather Senior Meteorologist Dan Pydynowski said. 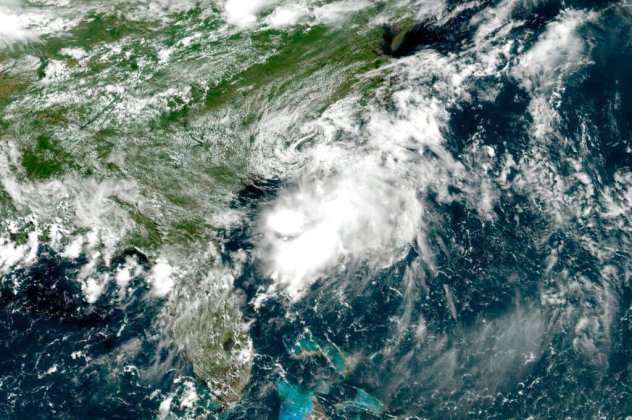 This GOES-East geocolor image provided by NOAA and taken at 11:30 a.m., Saturday, July 2, 2022, shows Tropical Storm Colin on the Atlantic coast of the United States. Tropical Storm Colin formed along the South Carolina coast on Saturday, bringing the threat of rain and high winds for a day or two during the holiday weekend before improving for Monday's July Fourth celebrations. (NOAA via AP)

Even though the current progress of this season has matched the average season's pace of three named storms by Aug. 3, AccuWeather forecasters still predict the season will have an above-average number of named storms when the final tally is in.

AccuWeather is predicting an above-average hurricane season for the Atlantic basin with 16 to 20 named, including six to eight hurricanes and four to six direct U.S. impacts. While above average, the predicted number of named storms falls below the 2021 count of 21.

The 2021 Atlantic hurricane season looked a bit different in comparison to the current one. The National Hurricane Center named Tropical Storm Ana before the official start of the 2021 season, with Bill, Claudette, Danny and Elsa following one after another from mid-June through early July. Meanwhile, the 2022 season broke a seven-year streak during which a tropical or subtropical cyclone formed before the official start of the season. 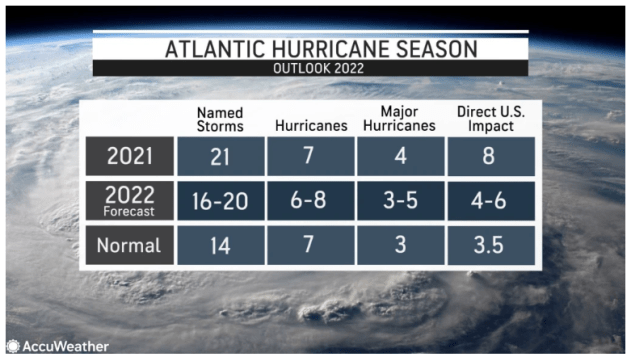 "I think we've been conditioned a little bit because in recent years we've had lots of activity early in the year, including some hurricanes, so this season is really shaping up to be more what we would call 'typical,'" Porter told AccuWeather Assistant Chief Broadcast Meteorologist Geoff Cornish. "It's a reminder that the peak of the hurricane season is on Sept. 10 or Sept. 11, right in that corridor, so we typically ramp up the tropical storm or hurricane activity as we head through the second part of August."

Aug. 15 is around the time of the season when the basin churns up a fourth named system, however, and if this season continues to stick close to the timing of the average season, the lull of activity may soon come to a close with the peak of hurricane season on Sept. 10. The hurricane season officially comes to a close on Nov. 30.

Porter cited dry air, dust coming off the coast of Africa and unfavorable winds as conditions that have suppressed tropical development in the main development region, an area in the middle of the Atlantic where most of the basin's storms end up developing.

"It's just that conditions have not been favorable for [development] so far, but that's why the conditions in that part of the Atlantic tend to dictate whether or not we're going to end up with an active hurricane season," Porter said.

It's this region where AccuWeather meteorologists will look to later in the tropical season as conditions become more favorable for tropical development with Porter warning that "activity can ramp up perhaps quickly."

How to stay safe when a hurricane causes power outages