By the numbers: Measuring the fury of Hurricane Dorian

Hurricane Dorian quickly moved west before stalling out over the Bahamas as a Category 5 storm with winds over 185mph.

Hurricane Dorian has been an intense storm that will not soon be forgotten. As a Category 5 storm, the highest rating on the Saffir-Simpson hurricane wind scale, it relentlessly pounded the northern Bahamas for two days with devastating winds and catastrophic storm surge decimating the Abaco Islands as well as Grand Bahama.

By the time that Dorian reached the shores of the eastern United States, albeit much weaker than it was at peak strength, it had already left its mark in the history books. 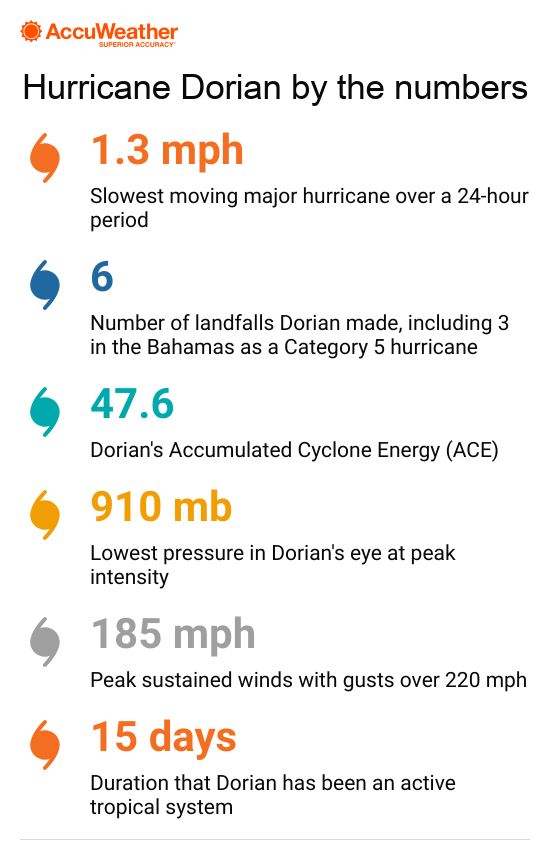 Here are some of the most notable statistics from the deadly hurricane:

Dorian has been the strongest of the bunch with maximum sustained winds of 185 mph and wind gusts topping 220 mph. To be classified as a Category 5 hurricane, sustained winds must exceed 157 mph.

Not only did Dorian pack powerful winds, but its central pressure dropped to remarkably low levels. 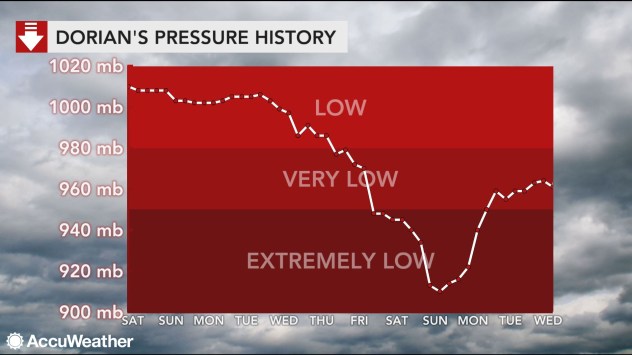 When it was at peak strength, Dorian’s central pressure was 26.87 inches of Mercury (910 millibars). This is tied for the ninth-lowest pressure measured in the eye of a hurricane since 1980.

Triple landfall in the Bahamas

After receiving the name Dorian, the then-tropical storm briefly made landfall over St. Lucia around 2 a.m. EDT on Tuesday, Aug. 27, 2019. From there it tracked northwest, narrowly missing Puerto Rico as the storm grew.

Shortly after reaching peak strength, Dorian made a catastrophic landfall in the northern Bahamas.

The unprecedented hurricane made its first landfall in the Bahamas on Elbow Cay, Abacos, around 12:30 p.m. EDT on Sunday, Sept. 1, 2019. By 2 p.m. EDT, Dorian made a second landfall on Great Abaco Island near Marsh Harbour. By 11 p.m., the eye of the storm had made landfall over the eastern end of Grand Bahama Island. 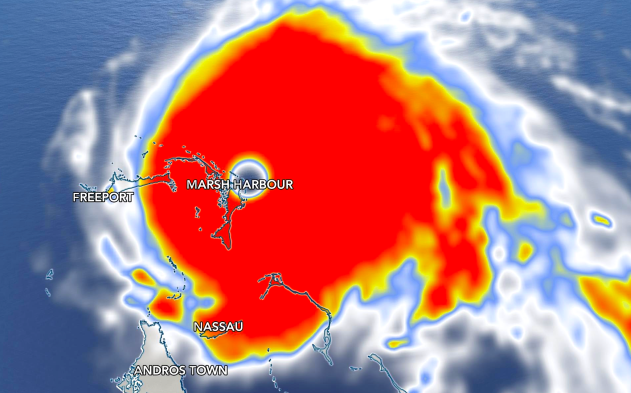 After hammering the Bahamas, Dorian tracked up the coast of the eastern U.S., making a fifth landfall Cape Hatteras, North Carolina, at 8:35 a.m. EDT Friday, Sept. 6, 2019.

Dorian stalls and spins over the Bahamas

As Dorian tracked over Grand Bahama Island, its forward momentum came to a halt, causing the storm to stall over the island. This was devastating to the northern Bahamas, putting some areas in the wrath of the Category 5 hurricane for more than a day.

Over the span of 24 hours, Dorian’s average speed was just 1.3 mph, the slowest speed for any major hurricane since records began in 1851, according to Robert Rohde, a lead scientist at Berkeley Earth. For a time during this 24-hour window, the storm was completely stationary.

"Most people can easily walk faster than the mere 1.3 mph (2.0 kph) that Dorian has been advancing," Rohde said on Twitter.

The elongated life of Dorian

The slow motion that Dorian has exhibited has helped to make this hurricane live longer than many others.

“Dorian's longevity as a hurricane is not particularly noteworthy. Its longevity is slightly more impressive as a named storm,” Colorado State University meteorologist Phil Klotzbach told AccuWeather in an email. Klotzbach is a research scientist specializing in Atlantic basin seasonal hurricane forecasts.

This two-week lifespan puts Dorian in the top 10% of all named storms in the satellite era, according to Klotzbach.

Saturday marked the 15th day that Dorian was an active tropical cyclone, dating back to Aug. 24, 2019, when it first became a tropical depression.

However, this comes nowhere close to the all-time record for the longest-lived storm in the Atlantic. That record is held by the San Ciriaco Hurricane of 1899 which was classified as a hurricane for four weeks.

During Dorian’s life, there were several other tropical systems that came and went across the Atlantic.

Tropical Storm Fernand also took shape in the Gulf of Mexico as Dorian crept along the Florida Coast. Fernand originally became a tropical depression at 10 a.m. CDT Tuesday, being upgraded to a tropical storm just three hours later. Within 24 hours of becoming a tropical storm, it had made landfall in Mexico and began to weaken.

One way that meteorologists compare different storms is a scale called the Accumulated Cyclone Energy (ACE).

"The higher the ACE value for each storm, the stronger and potentially higher impacts it creates," AccuWeather Hurricane Expert Dan Kottlowski said.

As of Saturday, Dorian’s ACE was over 47, according to Colorado State University. This accounts for over 85% of the entire ACE from all of the storms combined in the 2019 Atlantic Hurricane Season so far.

The ACE from Dorian is also greater than 13 full hurricane seasons, according to Klotzbach.

“Katrina's ACE was 20. Michael's ACE was 12. While both of these storms were obviously very strong, neither of them was very long-lived,” Klotzbach told AccuWeather.

Meanwhile, the powerful and long-lived Hurricane Irma in 2017 had an ACE of 65.

There could possibly be new wave height records thanks to Hurricane Dorian. MIMU of Newfoundland reports a buoy off the coast measured waves to 100.7 ft with a significant wave height of 48.8 ft from Dorian.

RECORD WAVES? MIMU of Newfoundland reports that the Channel-Port Aux Basques Buoy just off the coast measured waves to 30.7m (100.7 ft) with a significant wave height of 14.9m (48.8 ft) from Hurricane #Dorian last night. IF verified, would be new records (1/2) pic.twitter.com/ea00O0qMw9