A first look at what Hurricane Dorian left behind in the Abaco Islands, as one of the strongest hurricanes to ever make landfall in the Bahamas.

A clearer picture of the devastation wrought in the Bahamas by Hurricane Dorian emerged on Tuesday. AccuWeather National Reporter Jonathan Petramala flew over the town of Marsh Harbour in the Abaco Islands, one of the first places blasted by the powerful storm on Sunday when it was a Category 5 hurricane with 185-mph sustained winds and gust up to 225 mph.

Exclusive aerial footage Petramala recorded from a helicopter showed widespread devastation in Marsh Harbour. Many buildings and homes were totally flattened and reduced to piles of rubble. Other homes that weren't leveled had roofs that had been partially or totally blown off. And some structures appeared to have survived the high winds with minimal structural damage. Leonard M. Thompson International Airport, which is situated on Marsh Harbour about a mile inland from the Atlantic Ocean, was completely submerged by water.

Any trees that remained standing had been completely stripped of their leaves. Meanwhile, debris was littered in every direction.

There weren't many signs of life in the footage shot by Petramala, but one encouraging moment showed a woman walking his dog along a street, destruction all around him. But the woman and the dog seemed unharmed.

Nearly two days after Marsh Harbour was thrashed by Dorian, an ominous ceiling of gray clouds still hung over the island as Petramala surveyed the damage.

"Much of the damage looked like what you'd see caused by a strong tornado, especially the trees being stripped of their foliage," AccuWeather Meteorologist and Social Media Manager Jesse Ferrell said after viewing the footage. Indeed, the top wind gusts unleashed by Dorian hit 225 mph, the equivalent of wind speeds in an EF4 tornado.

"It's just heartbreaking," Petramala said of the destruction after returning from the flight. 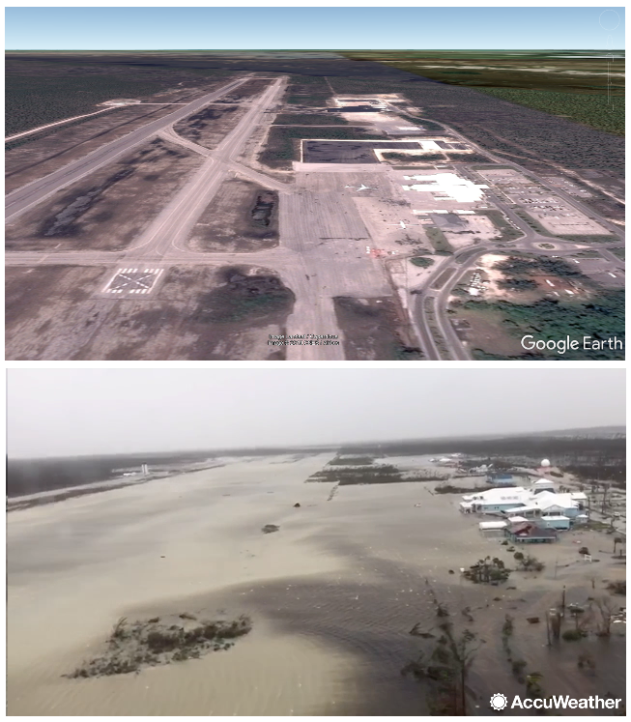 This before-and-after image shows Leonard M. Thompson International Airport in Marsh Harbour before Hurricane Dorian struck, and completely under water in the days after the storm slammed the Bahamas. (AccuWeather / Google Earth)

As of Tuesday evening, the official death toll stood at seven, according to the government, and included a young boy who reportedly drowned. But reports from local media of bodies floating in floodwaters stoked fears that the number of fatalities would skyrocket in the days ahead.

On Monday, Prime Minister Hubert Minnis addressed the media and said, "We are in the midst of a historic tragedy in parts of the northern Bahamas." He added, "The devastation is unprecedented and extensive," the images of the aftermath captured by residents "heartbreaking."

The video sent back from the storm zone by Petramala stood as a stark illustration of Minnis' assessment, along with the footage and still images flooding onto social media in the wake of the record hurricane. One dramatic clip showed a group of four people swept away by raging floodwaters. An ABC News crew filmed the incident, and one of the producers helped rescue the individuals, members of the same family, according to ABC News, from the water.

Even before the storm began pulling out, the International Red Cross had mobilized to begin addressing the catastrophe in the Bahamas. Matthew Cochrane, a spokesperson for the Red Cross, told AccuWeather some 13,000 homes were destroyed or severely damaged in the storm. More than 60,000 would need food and clean water in the coming days, Cochrane told The Associated Press.

By Tuesday, Hurricane Dorian, after parking itself over the Bahamas for more than 12 hours, unleashing heavy rains and stirring up a storm surge of more than 20 feet, finally began moving away from the islands.

Weather conditions are expected to begin improving in the Bahamas as Dorian continues moving away and the island nation begins to pick up the pieces. As for where Dorian is headed next, forecasters were watching the storm closely, calling for it to stay just off the Florida coast as it heads north. They cautioned a landfall in the Carolinas was still a possibility.

Reporting from the Bahamas by Jonathan Petramala.

Tropical Storm Fernand closes in on Mexico, will bring flood risk to southern Texas Dorian passing dangerously close to Florida coast before it targets Carolinas Heartbreaking videos show the hours of terror experienced by residents in the Bahamas Bahamas ‘in the midst of a historic tragedy’ as Dorian relentlessly pummels island nation
Report a Typo