Hurricane Dorian’s stall over the Bahamas has led to “unprecedented devastation” according to the country's prime minister, the destruction of more than 13,000 homes, according to the Red Cross, and at least five confirmed deaths.

On Monday afternoon, Bahamas Prime Minister Hubert Minnis announced that the death toll had risen to at least five, telling reporters, "We are in the midst of a historic tragedy in parts of the northern Bahamas." Minnis went on to say "the devastation is unprecedented" and added that the images of the aftermath "are heartbreaking." Many fear that the death toll will continue to rise in the coming days.

The Bahamas Press reported that there was a "growing wall" of residents frantically looking for word of loved ones who they could not contact. The paper also painted an apocalyptic portrait of the aftermath in Abaco after the island was pummeled by Dorian.

Reporters from The Bahamas Press described the devastation they witnessed in Abaco: "The place is a disaster, no business is operable and bodies are floating around Big Cay. The concern is nobody knows how many people died, and they feel when the water subsides some bodies will be washed out to sea."

“We have received catastrophic damage,” Minister of Foreign Affairs and North Abaco MP Darren Henfield said Monday. “We have reports of casualties. We have reports of bodies being seen. We cannot confirm those reports until we go and confirm for ourselves.”

The first fatality blamed on Dorian was confirmed late Sunday night in Abaco. Lachino McIntosh, a young boy, drowned and his sister was missing, according to The Bahamas Press. There are conflicting reports about McIntosh's age. He is believed to be either 7 or 8 years old.

“All I can say is that my daughter called from Abaco and said that her son -- my grandson -- is dead," the boy's distraught grandmother, Ingrid McIntosh, told Eyewitness News in the Bahamas. "That’s it. I don’t know what really happened. I think she said he drowned." She continued through tears, saying, "My grandson is dead," and adding that she'd just seen the little boy two days ago. "He said, 'Grandma, I love you.'" 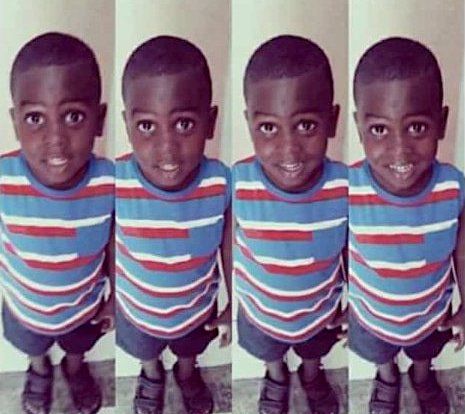 Public officials advised residents who need rescue to call or WhatsApp their location to officials. As of mid-day Monday, authorities said they had received “over 2,000 rescue requests” to an emergency WhatsApp number.

Residents who are moving to their home’s highest areas are being told to take a tool strong enough to break through the roof as storm surges may rise to 25 feet. One resident recorded video of waves lapping against the home’s roof.

“There’s houses that are torn apart. There’s tree limbs in the road,” Bruce Sawyer, a resident who rode out the storm on Abaco Island in the Bahamas, told Cecila Vega of "Good Morning America" on Monday. “We couldn’t even evacuate right now if we needed to. It looks like a bomb went off.”

My front yard!! #HurricaneDorian2019 keep praying!! We waiting for the eye of the hurricane so they can come save us!! pic.twitter.com/xpNoksbvyG

The U.S. Coast Guard has deployed crews to assist with the rescue efforts in the Bahamas, and some of the victims they brought back appeared to be in poor condition.

"The Abacos are still dealing with some very serious hurricane force winds, and these types of helicopters have been able to go in and rescue people,” AccuWeather National Reporter Jonathan Petramala, who’s on the ground in Nassau, reported. “The people they are taking off do not look like they are in very good condition, but at least the Coast Guard is able to make it out there and perform these rescue operations.”

Hurricane Dorian hit the Bahamas as a powerful Category 5 storm and continued battering the Bahamas all day on Monday and into the night, grinding to a halt over Grand Bahama Island as the storm stalled its forward progress to just 1 mph before eventually losing its Category 5 force.

The storm, which left many communities underwater, made landfall on three different islands with punishing sustained winds of 185 mph and gusts that reached speeds of 225 mph.

"It's a massive, massive disaster for the Bahamas," Matt Cochrane, International Federation of the Red Cross, told AccuWeather. He added, "As we talk about the Bahamas, and that's important, we're also thinking of potential future impact on the United States ... Maybe as many as 19 million people live in the potential path of the storm."

By Monday afternoon, Dorian had stalled about 105 miles east of West Palm Beach, Florida, and only 25 miles east of Freeport in Grand Bahama Island. Dorian weakened slightly to Category 4 strength, with maximum sustained winds dropping to 155 mph and then down to 145 mph and 130 mph, but the storm was beginning to expand in size, meaning it's still an extremely dangerous hurricane. The Bahamas Press reported that Grand Bahama International Airport was inundated with at least 5 feet of water.

In addition to some places in the Bahamas seeing up to 30 inches of rain, severe storm surge was devastating.

AccuWeather forecasters say Dorian will begin to drift to the northwest on Tuesday, slowly moving away from the northern Bahamas, though dangerous hurricane conditions will continue across Grand Bahama before conditions begin to gradually improve later Tuesday.

Forecasters expect the storm to stay just offshore and move parallel up along the Florida coast and then shift eastward and do the same along the coast of the Carolinas.

Dorian proved to be a historic hurricane, the strongest ever during modern record-keeping to make landfall in the Bahamas and, with sustained 185-mph winds, it's now the second-strongest hurricane, by wind speed, ever recorded in the Atlantic basin. Dorian now stands behind only Hurricane Allen, the strongest storm ever recorded in the Atlantic basin. Allen thundered over the Gulf of Mexico in August 1980 and reached sustained wind speeds of 190 mph before making landfall near the U.S.-Mexico border.

Hurricane Dorian made its initial landfall at Elbow Cay, Abacos, in the Bahamas. The eye of Dorian then made a second landfall on Great Abaco Island near Marsh Harbour in the Bahamas. The third landfall came later on Sunday night with the eye encroaching the eastern end of Grand Bahama Island. Maximum sustained winds were 185 mph during the first two landfalls, dropping to 180 mph for the third. Gusts of 225, as AccuWeather Extreme Meteorologist Reed Timmer pointed out, were equivalent to the winds of an EF4 tornado.

The hurricane was devastating and seems to have left a lasting effect on the psyche of even someone who has become storm-worn over the years. Abaco resident Bruce Sawyer summed up the sentiment in the "Good Morning America" interview like this: “I was never scared of storms before. But this time I was terrified.”

LIVE: States of emergency increase in US as Dorian continues to pummel Bahamas ‘As frightening an eye as you will ever see’: Very close call for Florida as Hurricane Dorian looms off the coast Tropical Storm Gabrielle forms, joining Dorian and Fernand as Atlantic remains extremely active
Report a Typo