States of emergency increase in US after Dorian pummeled Bahamas

Dorian begins to finally inch away from Bahamas

The storm has begin a slow crawl to the north and AccuWeather Chief Video Meteorologist Bernie Rayno explains how it will parallel the coast of the southeastern U.S. and what impacts it will bring.

As of 1:40 p.m. EDT Tuesday, this live blog is no longer being updated. For the latest live updates on Dorian and it's path towards the U.S., click here.

Dorian's relentless assault on the islands has included winds in excess of 185 mph that have killed at least five people, ripped roofs off of houses, flipped cars, and caused widespread devastation. The slow-moving nature of the hurricane greatly increased the storm's impact, as Dorian had a plethora of time to inundate the islands with Cat 5 winds and flooding downpours. 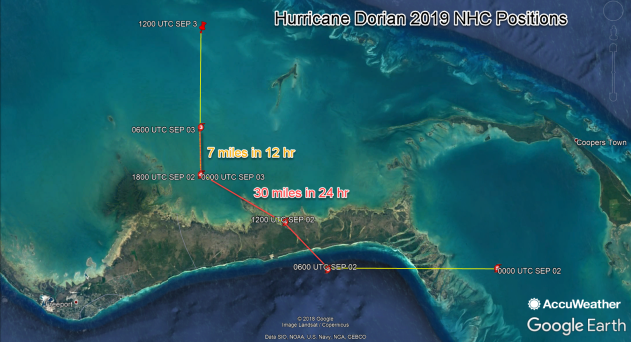 Forecasters expect Dorian to slowly begin to move northward away from the islands later Tuesday and dangerously close to Florida's east coast late Tuesday and eventually the Georgia and South Carolina coasts on Wednesday.

As the monster storm slowly approached the U.S., officials continue to trigger state of emergencies up the east coast from Florida to Virginia.

On Monday afternoon, Virginia Gov. Ralph Northam declared a state of emergency to allow the state to mobilize necessary resources.

"Hurricane Dorian is a serious storm, and current predictions indicate that it may affect parts of Virginia," Northam said in a statement. "I am declaring a state of emergency to ensure that localities and communities have the appropriate level of assistance, and to coordinate the Commonwealth's response to any potential impacts from Hurricane Dorian. I encourage Virginians to take all necessary precautions to make sure they are prepared as well."

Millions of people living along the coasts of Florida, Georgia and South Carolina have also been forced to evacuate. In North Carolina, Gov. Roy Cooper issued a state of emergency on Sunday and urged residents to be prepared and cautious.

“North Carolina has endured flooding from two strong hurricanes in less than three years,” Cooper said in a statement. “Now is the time to prepare for Dorian. To the people of North Carolina, particularly those still recovering in the eastern part of our state, we are working hard to prepare and we are with you.”

In South Carolina and Georgia, Gov. Henry McMaster and Gov. Brian Kemp enacted mandatory evacuations for over 1 million people to take effect on Monday at noon.

South Carolina’s evacuation order covers around 830,000 people, which McMaster recognizes might not be supported by all. In order to make transportation efforts smoother, all lanes on major coastal highways will become one-ways heading inland on Monday afternoon.

“We can’t make everybody happy,” McMaster said. “But we believe we can keep everyone alive.” 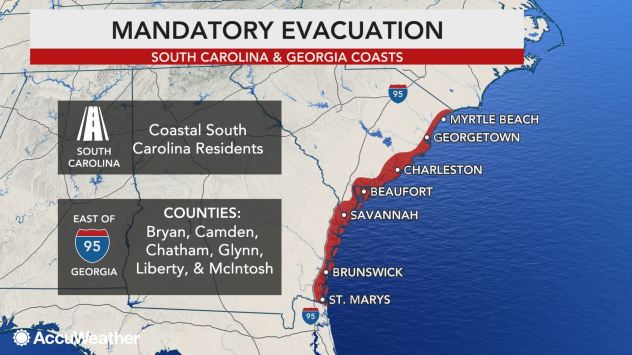 In Florida, Gov. Ron DeSantis signed a state of emergency on Thursday to include all 67 counties of the state. One of his main intentions for the State of Emergency declaration was to prevent fuel shortage issues that have plagued the state in years past.

"We just got off a video conference call with President Trump and the FEMA folks, governors McMaster, Cooper, DeSantis and I about the path of the hurricane and the preparations,” Kemp said in a video posted on Twitter on Sunday. “It’s still a massive storm and still heading our way. We’re hoping it’s going to turn north, but we need folks to remain vigilant and flexible. We will certainly keep you updated over the next 12 to 24 hours.”

President Donald Trump spoke with both DeSantis and Florida Sen. Rick Scott last week, assuring both that the state would receive the support necessary. In order to stay in the States for the storm, Trump opted to send Vice President Mike Pence in his place to a previously scheduled trip to Poland.

Coastal cities in Florida were some of the first to evacuate, as DeSantis moved to suspend tolls on numerous major highways in order to assist with the movement of coastal residents.

In Melbourne Beach, a barrier island centrally located on Florida's Atlantic coast, residents refused to take Hurricane Dorian lightly, despite forecasts suggesting the storm may not make landfall there. AccuWeather National Reporter Jonathan Petramala reported that many of the homes and business there have been boarded up for days in anticipation of Dorian's wrath.

"Folks are not ready to believe that this is going to stay off the coast," Petramala said.

Dorian has weakened to a Category 2 storm with maximum sustained wind speeds recorded at 110 mph. A Storm Surge Warning has also been extended northward to South Santee River in South Carolina, while a Storm Surge Watch is in effect for Cape Lookout, North Carolina.

"We are working closely with the Air Force monitoring the latest weather conditions, as well as our airline tenants, and will update travelers of any closures," Charleston states on its homepage. "We strongly recommend that passengers stay in direct contact with their airlines for up to date information on flight cancellations."

"In close consultation with the National Weather Service, airlines and airport stakeholders, airport leadership has determined it is in the best interest of the Orlando International Airport passengers and employees to cease operations," the Orlando International Airport said in a statement posted on Twitter. "Because of the uncertainty of the storm's track and the need to complete storm preparations by airport and air carriers, airport executive leadership has determined ceasing commercial operations is necessary."

Dorian continues to remain nearly stationary along the northern shores of Grand Bahama Island. Citizens of Freeport continue to feel the effects of the southwest side of the eye wall. The 4 a.m. National Hurricane Center has kept Dorian a strong category 3 hurricane with top sustained winds of 120 mph.

The 1 a.m. National Hurricane Center update has downgraded Hurricane Dorian to a powerful category 3 storm with winds of 125 mph. The storm is still stationary along the northern coast of Grand Bahama Island. Sustained winds of 47 mph have also been reported along the Juno Beach Pier in northern Palm County, Florida. This marks the first arrival of tropical storm-force winds in Florida.

Dorian is about 30 miles north-northeast of Freeport, Grand Bahama Island, and about 100 miles east of West Palm Beach, Florida. The hurricane has maximum sustained winds of 130 mph, which ranks the storm as a Category 4, however if it weakens by 1 mph it will be a Category 3 hurricane.

The hurricane has been stationary since 5 p.m. EDT Monday.

Hurricane Dorian is still stationary over the Bahamas and has sustained winds of 140 mph. The National Hurricane Center stresses that residents on Grand Bahama Island should stay in shelter as they are currently experiencing the eyewall of the storm.

The Coast Guard is deploying members and assets from Coast Guard Air Station Clearwater in preparation for Hurricane Dorian response in the Bahamas. 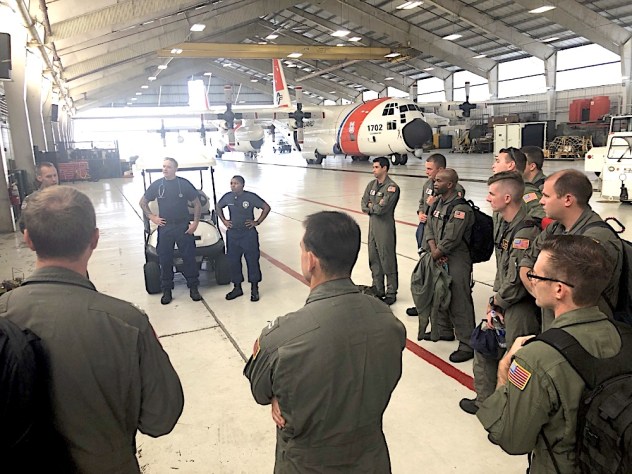 AccuWeather National Reporter Jonathan Petramala, who’s on the ground in Nassau, reported there are many rescue operations underway by the U.S. Coast Guard.

"The Abacos are still dealing with some very serious hurricane force winds, and these types of helicopters have been able to go in and rescue people,” Petramala reported, “the people they are taking off [the helicopters] do not look like they are in very good condition, but at least the coast guard is able to make it out there and perform these rescue operations.”

Rescues ongoing by @uscg in the #Bahamas from the #AbacoIslands @accuweather pic.twitter.com/etUYH7xzhU

Hurricane Dorian remains stationary and continues to blast Grand Bahama Island. Max sustained winds are down to 140 mph, which is still a strong Category 4 hurricane.

Dorian's bands are starting to impact parts of Florida.

Dorian's winds have steadily declined, but the hurricane remains a very dangerous storm.

As of late afternoon Monday maximum sustained winds were at 145 mph. The hurricane reached eastern and central Grand Bahama Monday morning and since that time has become nearly stationary. According to the National Hurricane Center, the storm has been stationary since 5 p.m. EDT.

This has brought and continues to bring a prolonged period of very strong wind, heavy rain and inundating storm surge. 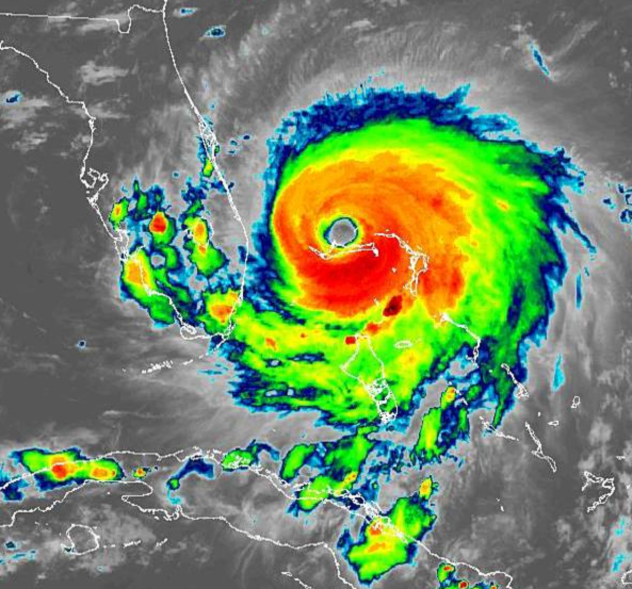 Dorian is about 40 miles northeast of Freeport, Grand Bahama Island, and about 105 miles east of West Palm Beach, Florida. The hurricane has maximum sustained winds of 145 mph, which ranks the storm as a Category 4.

Virginia Gov. Ralph Northam has declared a state of emergency in preparation for the hurricane.

I've just declared a state of emergency in advance of Hurricane Dorian. Please stay alert as we continue to track this storm and its potential impact on Virginia. More information here: https://t.co/nS299mtXcV

The Bahamian prime minister confirmed the hurricane has killed at least five people in the Abaco Islands since making landfall in the Bahamas on Sunday.

He also said the U.S. Coast Guard is on the island helping perform rescues.

Dorian has maximum sustained winds of 145 mph. The storm is about 25 miles northeast of Freeport, Grand Bahama Island, and about 105 miles east of West Palm Beach, Florida. According to the National Hurricane Center, the storm is stationary now.

Dorian moved approximately 14 miles on Monday between 8 a.m. EDT to 4 p.m. EDT, which is slightly more than the length of New York City's borough of Manhattan. 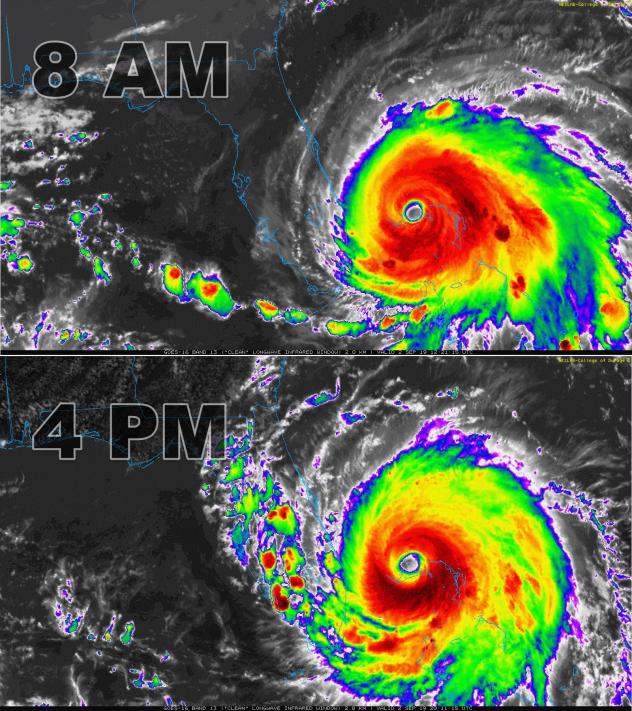 "You can feel the power of the storm when you stare into its eye from above," NASA Astronaut Nick Hague said in a twitter post.

The eye of #HurricaneDorain. You can feel the power of the storm when you stare into its eye from above. Stay safe everyone! pic.twitter.com/yN3MGidY3N

Dorian continues to bring life-threatening conditions to Grand Bahama Island. Residents across the island are waiting to be rescued.

"Our thoughts are with the people of the Bahamas who have experienced savage destruction," North Carolina Gov. Roy Cooper said.

Dorian is about 25 miles northeast of Freeport, Grand Bahama Island, and about 105 miles east of West Palm Beach, Florida.

The hurricane has maximum sustained winds of 150-mph while moving west-northwest at 1 mph. 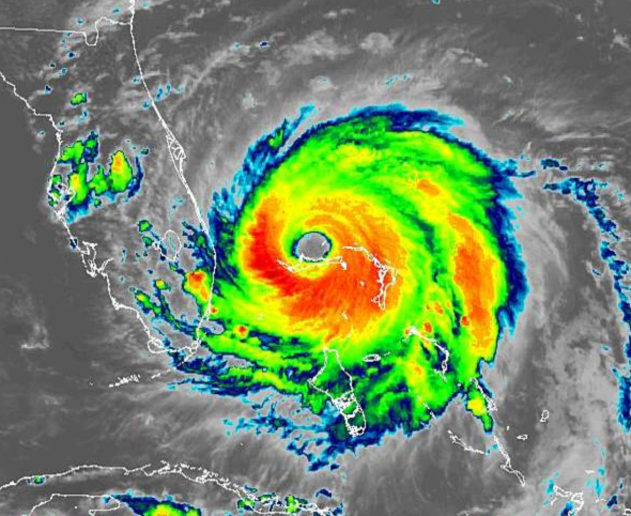 Crews in South Carolina have completed the reversal of traffic on Interstate 26 from Charleston to Columbia. Mandatory evacuations went into effect at noon.

Thanks to the hard work of the crews at @SCDPS_PIO and @SCDOTPress the I-26 lane reversal from Charleston to Columbia is open and flowing ahead of schedule. pic.twitter.com/HbvRGO6x8a

With maximum sustained winds near 155 mph, Hurricane Dorian has been downgraded to an extremely dangerous Category 4 storm. The storm is also expanding in width, spreading the hurricane-force winds farther out than before. The hurricane is still moving west at 1 mph.

‘No way to sugarcoat it, there’s a hell of a lot to do’