More tropical development likely in the Atlantic this week following formations of Peter, Rose. Get the latest.

Dorian completed it's much-anticipated turn to the north-northeast and AccuWeather Meteorologist Geoff Cornish explains when landfall is expected.

Hurricane Dorian continued to pick up speed early Wednesday morning after parking itself over Grand Bahama Island for more than 12 hours Monday evening into Tuesday morning and relentlessly thrashing the island. Around 95 miles away from Daytona Beach, Florida, Dorian was moving north-northwest at 8 mph.

Millions are under evacuation orders from Georgia to Virginia with all eyes on Dorian, which has weakened to a Category 2 storm, and the track it takes along the southeastern coast of the United States. AccuWeather meteorologists continue to believe that the center of Dorian will remain east of Florida.

But forecasters have concerns that Dorian could parallel the Carolina coast with battering winds, pounding waves and torrential rain and even make a direct strike on the Carolinas. Significant impacts are in store for coastal areas even if landfall is avoided. 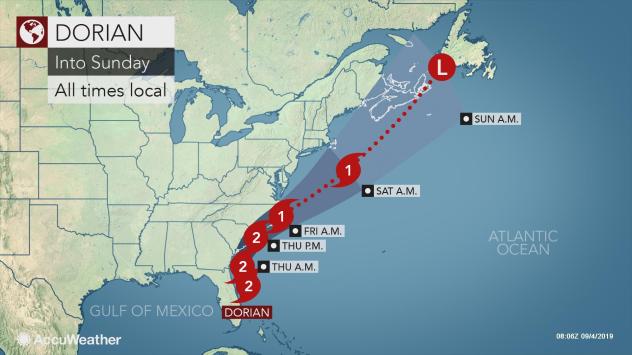 The extent of loss of life and devastation in the northern Bahamas will become more clear in the coming days and weeks. Many homes were completely submerged and some people had no place to go. 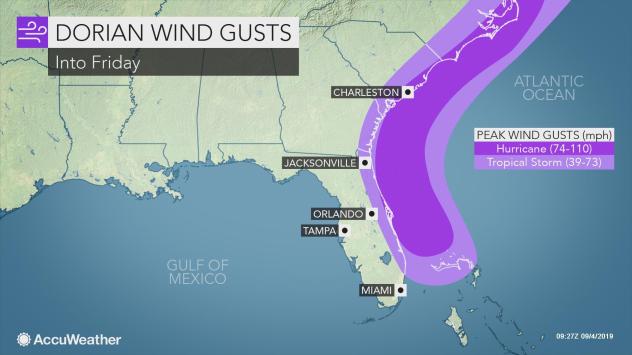 Despite Dorian being past its peak intensity, the storm remains as dangerous, particularly because it's growing larger in size and its wind field expanding. It should not be taken lightly, forecasters caution.

"Even though Dorian is forecast to gradually lose intensity near the eye, the hurricane will gradually grow in girth in the coming days," according to AccuWeather Hurricane Expert Dan Kottlowski.

It is possible that Dorian will fluctuate between Category 2 and 3 strength as it moves over the warm waters of the Gulf Stream through Thursday.

The cloud shield and spiral bands are already considerably larger in size, when compared to late last week.

"This means that the areal extent of hurricane and tropical storm conditions will increase as Dorian encounters the United States," Kottlowski said.

This trend began over the Bahamas this past weekend and will continue until the storm moves over the cold waters of the North Atlantic during the upcoming weekend.

Dorian will remain an ordeal for residents, visitors, officials, shipping and cruise interests much of this week along the Atlantic Seaboard.

Preparations to protect property need to be completed as soon as possible. Small craft should be secured in port. Cruise and shipping interests should avoid the path of Dorian.

Storm surge and flooding rainfall are the leading causes of fatalities as a hurricane approaches land.

"People can expect a storm surge of 4-7 feet with locally higher inundation from east-central Florida to southeastern Virginia associated with Dorian," Kottlowski said. "One area we are concerned about for inundation is around Cape Canaveral and Merritt Island, Florida."

While a waterspout or tornado can occur anywhere in the spiral bands of the hurricane, the greatest risk will be in the northeastern quadrant of the storm as it nears the coast in North Carolina.

What can Florida, southeastern Georgia expect?

This is expected, even though the center of Dorian is likely to remain offshore. 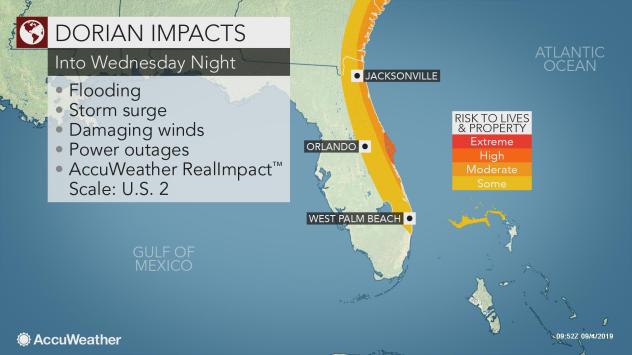 The coastal flooding will be greatest around the inlets, back bays and Intercoastal Waterway.

Tropical storm gusts with sporadic power outages and isolated urban flooding are possible as far west as U.S. Routes 27 and 301 in Florida and Georgia.

Rainfall of 2-4 inches with an AccuWeather StormMax™ of 8 inches is forecast for the immediate upper Atlantic coast of Florida and the Georgia coast.

Depending on exactly how close to the coast Dorian tracks, the eye may make landfall along North Carolina's Capes Fear, Lookout and Hatteras.

AccuWeather Chief Broadcast Meteorologist Bernie Rayno said Dorian will be closest to the capes Thursday into Thursday night, with the storm's center of circulation as close as 30 miles from those locations.

The AccuWeather RealImpact™ Scale for Hurricanes for Dorian is a 5 on the Bahamas but a 2 on the mainland U.S. 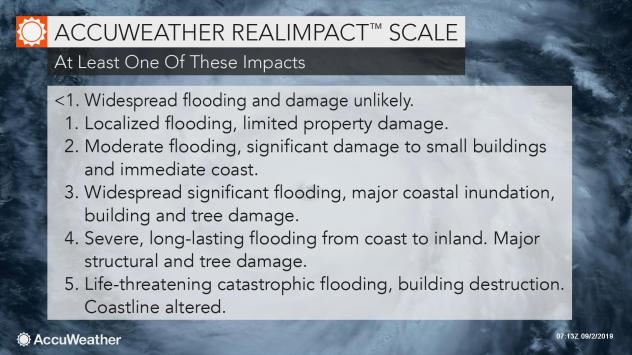 While the Dorian will lose some intensity due to friction of the large landmass of North America and increasing wind shear, the hurricane may track so close that a slight shift in the track or wobbles with the center may result in multiple landfalls in North Carolina.

Dorian is forecast to slowly weaken along much of its northeastward route from Georgia to North Carolina waters. The hurricane is likely to be a Category 1 near Cape Hatteras during Friday morning.

Into the latter part of this week, the hurricane is forecast to increase its forward speed. 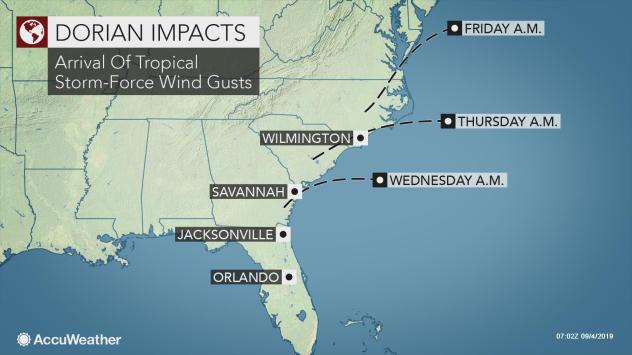 However, the initial slow movement and ongoing proximity to the coast may be almost as bad as a fast-moving, more intense hurricane farther offshore.

Well ahead of the hurricane, stiff northeasterly breezes will create above-normal tides and an uptick in the strength and frequency of rip currents. Large swells propagating outward from the storm will create dangerous surf. 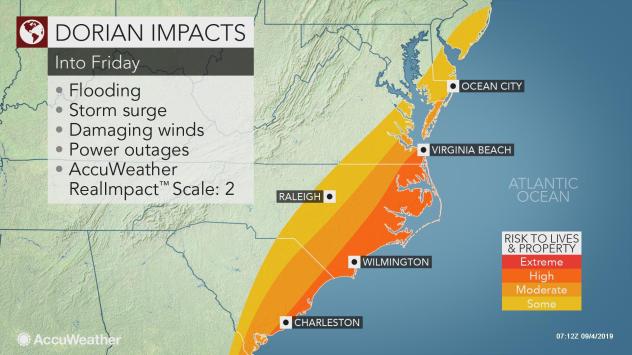 Due to increasing onshore winds, each high tide cycle is likely to be progressively worse in terms of coastal flooding ahead of the day when the storm is nearest.

Rather than lasting a few hours, an entire day's worth of damaging winds, pounding waves, coastal flooding and heavy rain will take its toll on beach communities and areas over the mainland with exposure to the back bays and coastal rivers.

Tropical Storm Gabrielle forms, joining Dorian and Fernand as Atlantic remains extremely active
‘As frightening an eye as you will ever see’: Very close call for Florida as Hurricane Dorian looms off the coast
Bahamas ‘in the midst of a historic tragedy’ as Dorian relentlessly pummels island nation
LIVE: States of emergency increase in US as Dorian continues to pummel Bahamas
In Hurricane Dorian's track, echoes of Andrew in 1992rn

Cities, such as Charleston, South Carolina, that experience flooding during high astronomical tides should expect significant flooding as the week progresses. Conditions may not improve until the hurricane has passed to the northeast and winds on the back side are pushing water away from the coast.

However, there will be a period late this week where the Outer Banks is likely to experience flooding on the west side from Pamlico Sound.

"But, enough rain is still likely to fall when combined with high tide levels to lead to major flooding in the coastal streams and rivers of the Carolinas and southeastern Virginia," Kottlowski said. 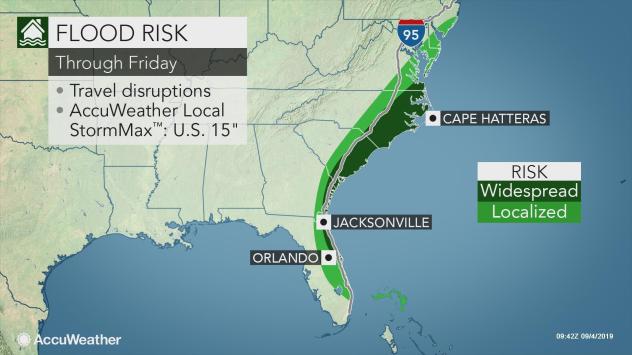 "Rainfall of 8-12 inches with an AccuWeather Local StormMax™ of 15 inches is forecast in these areas," he added.

Could the storm hit northeastern US or Atlantic Canada?

While the long-range track is likely to take the storm east of the mid-Atlantic, interests in Cape Cod, Massachusetts, Maine, Nova Scotia and Newfoundland should monitor the progress of Dorian.

Interaction with non-tropical systems in such a way could bring the storm close to eastern New England and perhaps onshore in Canada later this weekend. 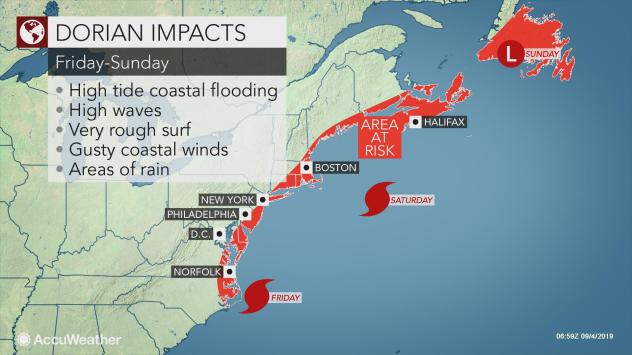 Even though Dorian may be a shell of what it has been in the tropics, it would still be a natural force to be reckoned with in terms of rainfall, rough seas and wind.

Cooler air to sweep across East as fall officially begins

World's largest trees wrapped in aluminum as flames close in Asteroid 3 times taller than Niagara Falls to zip past Earth on 1st da...