Rainfall of as much as 2 inches in just an hour left roadways completely under water and prompted drivers to abruptly abandon vehicles.

Numerous roadways were shut down in Denver on Sunday evening after torrential rain fell across the region triggering flash floods and stranding motorists. The Denver Fire Department said that crews rescued at least 19 people stranded in vehicles in flooded streets, including multiple children and a baby.

Heavy storms developed north of the Mile High City during the evening and intensified as they pushed southwestward across the Denver metro area and Front Range. Some locations recorded between 1 and 2 inches of rainfall in as little as an hour.

In some of the eastern and central parts of the city, 1.5 inches of rain fell in as little as 20 minutes, according to AccuWeather National Reporter Tony Laubach. Heavy amounts of small hail were mixed in with the torrential rains, compounding the problems by clogging storm drains.

A stretch of Interstate 70 was closed in both directions for several hours due to excessive flooding. The Denver Fire Department announced that 11 people were rescued from I-70 and York Street, and crews rescued another eight people from the flooded roadways at 38th and Blake Street.

Closures and delays were also reported by the Colorado Department of Transportation across portions of Interstate 25 Sunday evening, and officials urged drivers to stay away from flooded roadways.

Motorists traveling at the time of the storms had to slow to a crawl as the downpours drastically reduced visibility. Some Denver residents posted on social media and said that the rain was coming down so hard that it was extremely difficult to see how deep the water was on the roadways ahead.

Stewart Broman, a resident who lives near one completely flooded intersection told AccuWeather that hail-clogged storm drains were the culprit in the deep floodwaters that all but stopped vehicles in their tracks.

"All of a sudden, we ended up with the water coming up higher and higher," Broman said as he stood in front of an intersection with multiple vehicles trapped in the floodwaters. "We've never seen anything like that."

Tyler Abrams, who told AccuWeather he'd just arrived at Denver International Airport from Ohio, said the Uber vehicle he and his wife were riding in suddenly became engulfed in floodwaters that were as high as some vehicles' windows. "We got out of the car and walked about a quarter mile up the middle of the road," he said, adding that friends were eventually able to pick them up and take them to their hotel.

The storm's effects on ground transportation rippled throughout the city, creating travel headaches even for those whose vehicles weren't trapped in the rapidly-rising floodwaters as impassable roadways snarled traffic and created traffic jams.

As floodwaters gradually receded across metro areas, I-70 was reopened shortly after 10 p.m. MDT, according to the Denver Police Department and Colorado Department of Transportation.

Flash flood warnings were issued for residents in Denver, Commerce City and Aurora through 10:15 p.m. MDT, covering a population of nearly 645,000.

Experts caution travelers to avoid driving through heavily flooded roadways, as it takes just 12 inches of moving water to carry away most cars. According to the National Weather Service (NWS), more deaths occur each year due to flooding than from any other thunderstorm-related hazard. 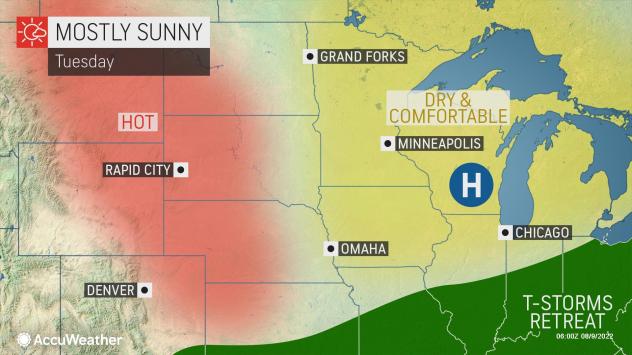 While Denver will endure above average temperatures this week, odds of heavy rain will be quite low over the coming days. Instead, the city will be able to dry out as sunshine will dominate through this weekend.

2 months down and nary a hurricane so far in the Atlantic basin
Ancient 'ghost footprints' discovered date back 12,000 years
TONIGHT: Final meteor shower of summer peaks
Report a Typo