An astronomical double-header is about to unfold in the night sky as the final meteor shower until October competes with another celestial spectacle.

One of the must-see astronomy events of the summer will soon unfold in the heavens as part of an astronomical double-header. The celestial spectacle will take place just before the second weekend of the month.

The Perseid meteor shower will peak on the night of Thursday, Aug. 11 into the early hours of Friday, Aug. 12, according to the American Meteor Society (AMS), but it has been active for weeks. Skywatchers have spotted some early Perseids in late July and the opening nights of August, and meteor activity will continue to increase leading up to Aug. 11.

The allure of the Perseids is not just the impressive number of meteors that it brings, which can range from 60 to 100 meteors per hour, but the fact that it peaks in late summer. The mild August nights have a higher chance of cloud-free conditions than the winter and spring nights when it is colder and often cloudier.

Unfortunately, the highly-anticipated meteor shower will have some competition in the sky this year. 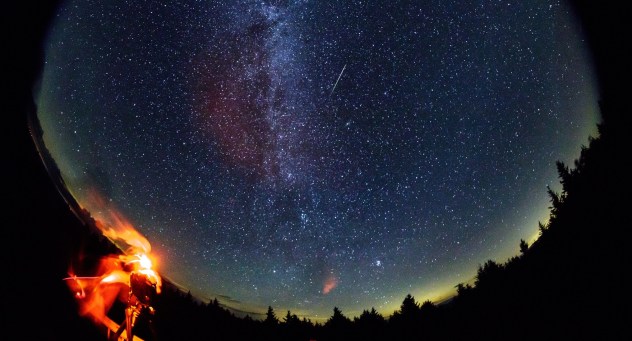 A meteor streaks across the sky during the annual Perseid meteor shower on Friday, Aug. 12, 2016 in Spruce Knob, West Virginia. (NASA/Bill Ingalls)

The third and final supermoon of 2022 will rise as the sun sets on Aug. 11, shining all night long amid the peak of the Perseids.

The light from the supermoon will wash out many of the dimmer meteors, significantly reducing the number of shooting stars to 10 to 20 per hour "at best," according to NASA. However, experts say that folks shouldn't pass on this year's Perseids due to the disruptive moonlight.

"Despite the full moon in the sky during the night of maximum activity, meteor rates will still be better than 95% of all other nights this year," the AMS explained.

For the best chances of seeing shooting stars, it is best to watch darker areas of the sky without the moon in sight.

"The more stars you can see, the more meteors will also be visible," the AMS said. "No matter the time of night, Perseid meteors can be seen in all portions of the sky."

The best weather conditions for watching the Perseids and the supermoon are predicted across much of the West Coast, the central Plains and around the Great Lakes. Breaks in the clouds should allow some people to catch a glimpse of a few meteors elsewhere across the Plains, southern Canadian Prairies, Great Lakes, mid-Atlantic and perhaps the Florida Peninsula on Thursday night.

Skywatchers across the Intermountain West, most of the Southeast and the Upper Midwest into the Canadian Prairies hoping to spot some shooting stars streak overhead may step outside on Thursday night to see clouds blocking out most or all of the sky. Clouds will also be an issue across most of Atlantic Canada. 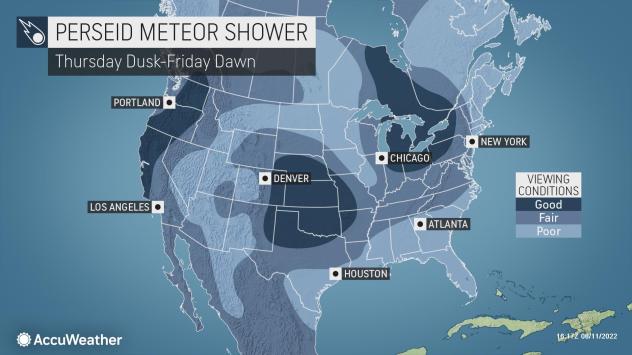 If cloudy conditions prevail on the night of Aug. 11-12, people can still see some of the celestial light show on the nights immediately following the peak. The moon will not be quite as bright on these nights either, which could make it easier to see a few of the dimmer meteors. 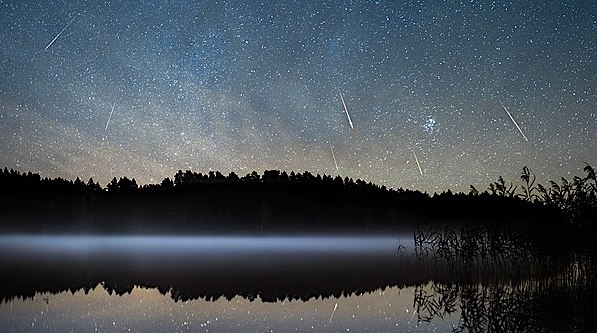 The Perseid meteor shower over Lithuania on Aug. 13, 2016. (Arnas Goldberg)

After the Perseids pass, the next moderate meteor shower will not take place until late October. The mid-Autumn Orionids do not produce nearly as many shooting stars as the Perseids, but it is still one of the best meteor showers in the fall.

A few more meteor showers will grace the night sky throughout the balance of 2022, including the Leonids in mid-November and the hyperactive Geminids in December, which can be just as impressive as the Perseids.