Italy's longest river, the Po River, the lifeblood of northern parts of the country in terms of drinking water supply and water resources for farmers, is facing the worst drought in at least 70 years. The amount of water trickling from the river to the nation's most expansive delta, where the Po River meets the Adriatic Sea in Venice, has reached an all-time low, according to The Associated Press. At the same time, salt water has reached as far as 24 miles inland, a distance greater than ever before recorded.

The ongoing drought across northern Italy, worsened by the historic heat wave that spread across Europe in July, has taken a heavy toll on the agriculture and fishing industry across the region.

The implications are not only causing hardships for farmers, who haven't been able to tap the river for water in nearly two months, according to The Associated Press, but they are causing fears about irreparable damage to the region's industry. Impacts include brackish waters killing shellfish that are harvested and critical to the country's most treasured dishes, including the clams found in clams and spaghetti, the AP reported.

In early July, the Italian Government declared a state of emergency across the Emilia-Romagna, Friuli Venezia Giulia, Lombardy, Piedmont and Veneto regions due to drought and extreme temperatures overtaking the area.

Temperatures soared to 100 F (38 C) in Milan, Italy, in late July as the heat wave was underway. That high mark was set after scorching heat in June led to an average temperature that was 6.5 degrees Fahrenheit (3.6 C) above normal in Milan, and July's heat wave, which was the worse in 200 years in Europe, led to temperature departures up to 7.1 F (3.9 C) above average for the month. 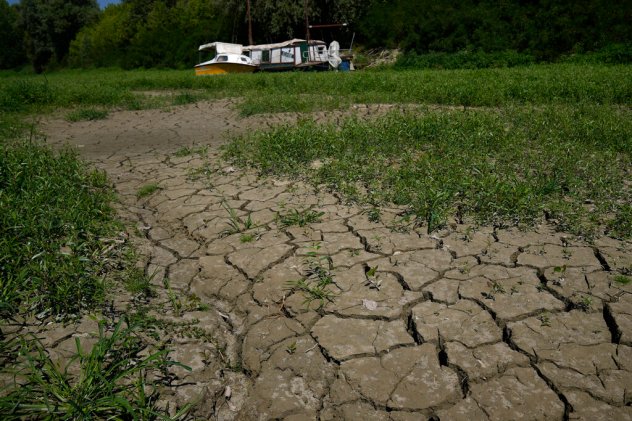 Rainfall has been scarce across the bone-dry region. Some locations along the Po River have not received rainfall for more than 117 days, according to the Po River Observatory. However, there is a prospect of rain in the forecast. AccuWeather forecasters say that scattered showers and widely separated afternoon thunderstorms can develop across parts of north Italy through this weekend.

Although, due to the extended length of the drought, this welcome rainfall will barely make a dent in the river levels, if at all.

"It could take years to recover from the historically low river levels being recorded this summer across parts of northern Italy," AccuWeather Meteorologist Thomas Geiger explained.

The Po River, which runs 405 miles across northern Italy, has long been used as a necessary resource for drinking water, regional agriculture, fishing and hydroelectric power. Images taken by the Copernicus Sentinel-2, a satellite operated by the European Space Agency (ESA), have revealed the stark differences in river levels from June 2020 to June 2022 as the drought worsened.

The satellite images show significant shrinkage of the river over the last two years. The landscape is clearly parched in the 2022 image and areas of exposed riverbanks can be seen where water once abundantly flowed -- the width of the river appears to be half of what it once was in some areas. 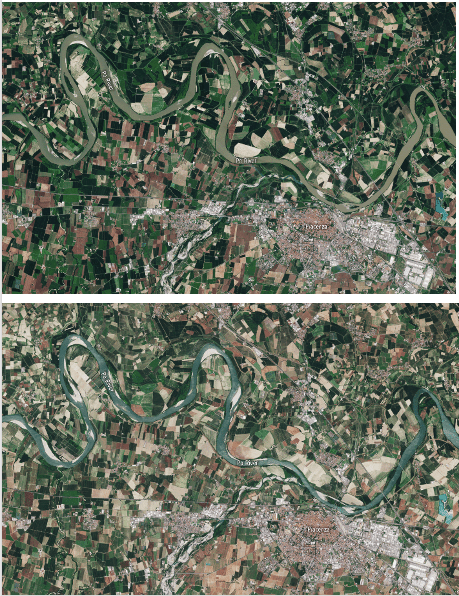 In late June, objects began to surface along portions of the Po River as water levels dropped. Some items dating back to World War II were found along the riverbed, including a barge in Gualtieri, Italy, that had sunk in 1943 and resurfaced back in June, prompting locals and tourists to gawk at and photograph the spectacle. The low water levels dropped more severely in July, when the amount of water flowing from the river into the delta was recorded as just one-tenth of the annual average, reported EuroNews.

Where the Po River meets the Adriatic Sea in Venice, an exchange of fresh and saltwater occurs, as is typical for deltas. However, due to the low freshwater levels flowing from the Po River into the Adriatic Sea, salty seawater is encroaching farther inland than ever before, creating an agricultural and drinking water crisis.

Area rice farmers are worried that the lack of water and subsequent rise in salinity could permanently damage the soil and impact future harvests, AP reported.

Elisa Moretto, rice grower and owner of the Moretto Agricultural Society, told EuroNews that the economic losses related to the upcoming harvest may be further exacerbated by the current increases in fuel and fertilizer costs.

Rice growers around the Po Delta are facing lower crop production levels as the higher salt content in the water kills the plants. With the Po Valley accounting for 35% of the country's agriculture production, the cost and demand for food are likely to increase across the region. 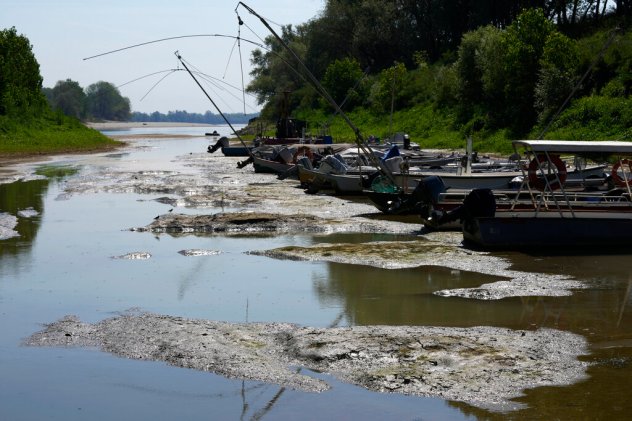 Boats dock at a tourist harbor along the Po river in Torricella, northern Italy, Thursday, July 14, 2022. Italy's drought has dried up rivers crucial for irrigation threatening some 3 billion euros ($3.1 billion) in agriculture, according to Italian farm lobby Coldiretti. Italy's confederation of agricultural producers, Copagri, estimates the loss of 30%-40% of the seasonal harvest. (AP Photo/Antonio Calanni)

Local fishers and clammers in Venice are feeling the impact of the higher salinity levels with daily harvests, reported The Associated Press. Increased amounts of algae are suffocating the mollusk.

The Po River flows from the Cottian Alps in northwest Italy, and a significant contributor to the water levels is melted snowpack from the mountains. A study completed through the European Geosciences Union that looked at the snow depth across the European Alps from 1971 to 2019 found that the average seasonal snow depth decreased by 8.4% per decade. These findings paint a grim outlook for the sustainability of rivers fed by melted Alpine snowpack.

In southeast and south-central England, the average rainfall in July was a mere 0.20 of an inch (5 mm). While rainfall was scant across England, some precipitation graced the British Aisles in July, mainly across Wales, Northern Ireland and Scotland -- and even in these regions, rainfall amounts were meager.

The lack of rainfall across the region has limited the production of summertime crops like maize, potatoes and beets. Multiple rivers across Southern England, such as the River Taw in Devon, were at critically low levels as of early August.

As the drought persists across much of Europe and modest amounts of beneficial rainfall occur, the threat of wildfires will continue to increase. So far this summer, expansive wildfires have spread across parts of Spain, France and Germany, displacing thousands of residents and disrupting tourism. Without vast improvements in drought conditions, wildfires could worsen and farmers will continue to struggle.

Recreation How realistic were the flying scenes in the new 'Top Gun' movie?