These linear, peculiar-looking openings in the sand could be human made. But a more plausible explanation might be that they’re tracks left behind by an undiscovered species lurking in the deep sea.

Who or what made these tiny holes at the bottom of the ocean?

The depths of the Earth's oceans contain many secrets that often take researchers years of investigation to solve. A new mystery in the Atlantic Ocean is almost literally taking them down the rabbit hole.

On July 23, along the seafloor off the coast of Portugal beneath the island chain of the Azores, scientists working with the National Oceanic and Atmospheric Administration (NOAA) found a dozen sets of small holes in the sand at a depth of nearly 2 miles, with no clues of how they got there. Two weeks later and 300 miles away, they found even more mysterious holes, exactly the same as the first. 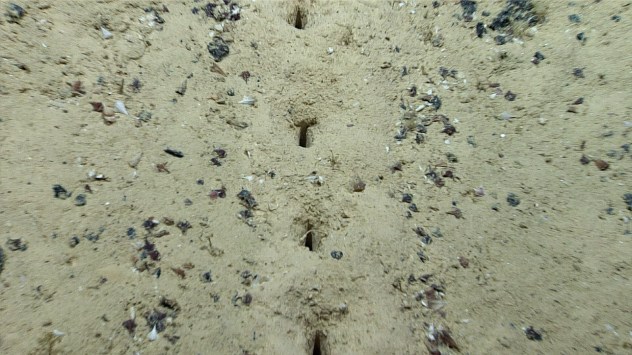 A close look at the sets of holes along the floors of the Atlantic Ocean. The origins of the holes are unclear. (NOAA Ocean Exploration)

From May to September 2022, NOAA is carrying out an expedition called Voyage to the Ridge 2022 in this relatively unexplored region of the Atlantic. NOAA scientists set off from Newport, Rhode Island, to Newfoundland, Canada, on the first leg of the trip and then left Norfolk, Virginia, for the Azores. They will finish up by traversing the Atlantic in the other direction, to Puerto Rico and the Caribbean. Their research vessel, called the Okeanos Explorer, is investigating the coral and sponge colonies on volcanic ridges. Finding the holes was more of a happy accident.

This isn't the first time scientists encountered these strange-looking patterns. NOAA spokesperson Emily Crum told The New York Times that in 2004, right in the vicinity of this initial discovery, researchers recorded the first sighting of the holes.

“The origin of the holes has scientists stumped,” NOAA's Ocean Exploration project tweeted. “The holes look human made, but the little piles of sediment around them suggest they were excavated by … something.”

“There is something important going on there and we don’t know what it is,” NOAA deep-sea biologist Michael Vecchione told the Times. “This highlights the fact that there are still mysteries out there.”

Hypotheses regarding the origins of the holes range from human-made causes to the tracks of an undiscovered species of animal or a gas vent blowing bubbles up through the sand. Vecchione co-authored a paper in 2022 discussing the gaps in current knowledge of the holes and what could be causing them.

According to the paper, the holes appear to have been either excavated from the top or pierced up from underneath, meaning whatever created them could have been digging the holes or burrowed under the sediment and potentially used the holes as a breathing apparatus -- like a snorkel. There's no definitive evidence to say for sure, though, and it will take more time and investigations to find the truth. 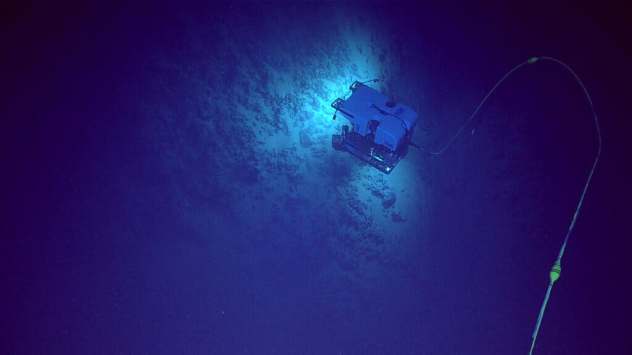 NOAA scientists use this underwater drone, called Deep Discoverer, to examine features of the seafloor up to 19,000 feet below the ocean's surface. (NOAA Ocean Exploration)

Vecchione, who was present for this latest run-in with the mysterious holes, said he was happy to see them again after nearly two decades but also expressed disappointment that there are still no answers. The Okeanos Explorer is currently docked in the Azores until Aug. 6, when the vessel will set out for its third Voyage to the Ridge expedition.

Weather News You've heard these weird weather phrases, but what are their origins?