The infection, from microorganisms usually rampant in warmer waters, can also lead to death by quickly ravaging the body, and the chances of getting sick are growing as temperatures spike in otherwise cooler waters. 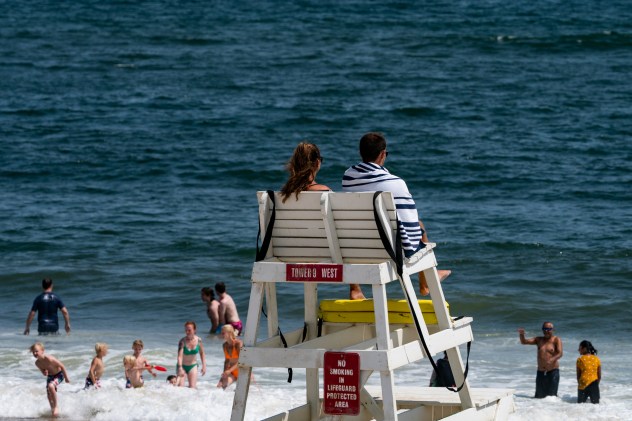 An Alabama man who planned to spend a leisurely day swimming with his family while vacationing on the Gulf Coast in Florida ended up having part of his leg amputated after contracting an insidious flesh-eating bacteria through a small cut that had been healing.

William Pledger, 75, was enjoying the warm weather with his relatives in Little Sabine Bay in Pensacola while attending the Blue Angels airshow on July 9.

"At some point, the whole family was in the water," his son, John Pledger, told WEAR-TV in Pensacola.

Five days later, his father's leg began to get sore, and by day 6, he was in severe pain, “could not sit still, his leg had started swelling up," and he was rushed to the hospital, John Pledger said.

The medical team quickly diagnosed him with the flesh-eating bacteria Vibrio vulnificus, one of many types of micro-organisms that cause necrotizing fasciitis, a severe and fast-spreading bloodstream infection in which the flesh around an open wound dies, according to the U.S. Centers for Disease Control and Prevention (CDC).

“The infection courses through the entire body, kind of like a hurricane or tornado that ravages everything,” Dr. Katherine Doktor, of Cooper University Hospital in New Jersey and co-author of a 2019 study on the illness, told Business Insider.

William Pledger’s relatives said that all of his soft tissue from the knee down had been destroyed and doctors informed him they had to amputate his leg below the knee.

Such flesh-eating bacteria enter the body typically through an open wound or break in the skin, like a cut or scrape or recent piercing or tattoo, according to the CDC.

"He had a small cut on his left leg, it was scabbed over, didn't look too bad," John Pledger told WEAR-TV. "It was very small."

Vibrio vulnificus is the same destructive bacteria that can make you sick by eating raw or undercooked shellfish, particularly oysters, or handling infected animals when you have an open wound, according to the CDC. Symptoms include diarrhea, cramping, nausea, vomiting and high fever, although some cases can be quite severe.

Microorganisms that cause necrotizing fasciitis occur naturally in the warm coastal waters of Florida, the state’s Department of Health said. Public health officials in Escambia County, which comprises Pensacola, even issued a warning over the Fourth of July weekend urging beachgoers to stay out of the water if they have any cuts.

“During the summer, especially in the coastal areas—especially in the Gulf Coast, where we have the heating of the water—we start seeing an overproduction of a bacteria called Vibrio,” said Dr. Laila Woc-Colburn, an infectious disease expert at Baylor College of Medicine in Texas.

But researchers now believe that increasingly warmer ocean temperatures have made for more prolific breeding grounds for such flesh-eating bacteria -- and not just in the usual spots.

Doktor’s 2019 study published in the Annals of Internal Medicine looked at five infection cases in people who were exposed to water in the cooler Delaware Bay or consumed shellfish in that area.

“These five cases are significant because in the eight years prior to 2017, we only saw one case of Vibrio vulnificus at our institution," she noted to Insider.

Still, cases of flesh-eating bacteria infections are rare, doctors say, but those that are diagnosed each year can be fatal. The Vibrio vulnificus bacteria alone causes 80,000 illnesses each year in the United States, with about 100 eventually dying from the infection, CDC said.

Even with his leg amputated, William Pledger’s relatives said he has a long road to recovery ahead. His family anticipates it could be months before he’s released from the hospital.

In the meantime, they hope others will take precautions in the water, heed official warnings and learn from their devastating ordeal.

“It was very emotional watching my dad go through all this," John said.