Spectators at a popular plane spotting site were in for a shocking surprise as an airplane made an unusually low landing.

A clear sunny day became frightful for spectators as an airplane made a shockingly close landing in Greece last week.

Pilot Demetrios Gregoriou captured the stunning footage as a Wizz Air plane made its final descent into Skiathos Airport over a crowd of plane spotters on Friday, Aug. 5. As the Airbus A321-200NX approached the eastern portion of the Greek island of Skiathos, plane spotters could be seen taking photos of the aircraft as it landed with one photographer even ducking as the plane flew over his head.

The up-close landing is made possible by the airport's unique location and measurements. The airport in Skiathos has a shorter than usual runway of just 5,341 feet (1,628 meters) long. Due to this, pilots begin their landing approach much lower than at other airports.

"In comparison, most aircraft land on runways about twice as long, usually 10,000 to 12,000 feet long," aviation enthusiast and researcher Brandon Murphy told AccuWeather.

The hot weather in the area may have also played a role in the airplane's low approach. 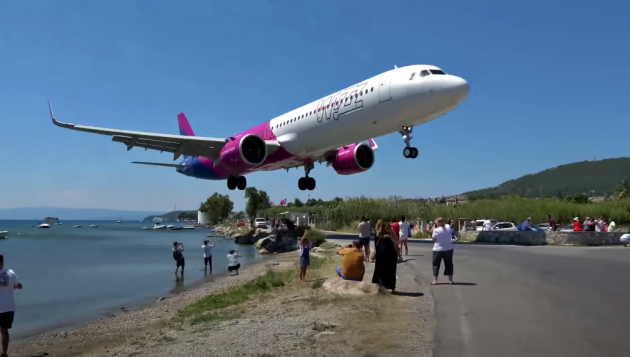 "Because the air is less dense on a hot day, the aircraft has less to work with once it gets on the runway because the reverse thrust does not have as much air to push against it to slow the aircraft down while landing," Murphy said.

Due to having less air slowing the aircraft down, the aircraft had to fly low and tight to the ground in order to slow the airplane down quicker on the runway with less air available for reverse thrust due to higher air temperatures, Murphy explained.

"Wizz Air has a tight schedule when landing at the airport, and they have to get the aircraft out quickly, therefore, hot brakes are not something they can deal with on a hot day," he said.

Murphy said the aircraft in the video is very new and was delivered to Wizz Air just last month. The flight originated from Naples, Italy, on Aug. 5, and had a flight time of 1 hour and 9 minutes. The plane began descending about 20 minutes before landing. 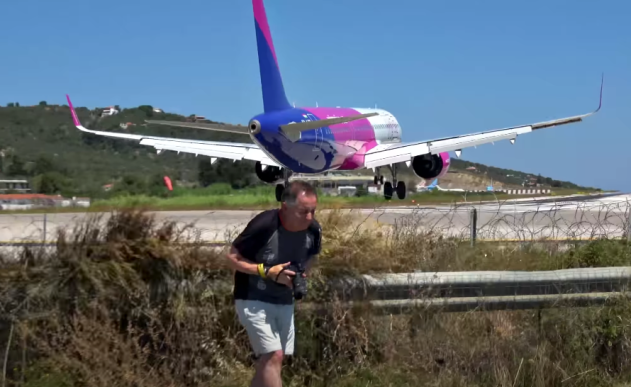 "On its descent, Wizz Air flight 8447 flew eastward over the Pagasetic Gulf where it descended from about 14,000 feet to 10,000 feet. It then made its final descent into Skiathos airport," said Murphy.

The Wizz Air flight continued eastward over Skiathos Island then circled south before making a northbound approach into Skiathos airport and over the crowd of plane spotters.

"Based on visual references in the video and ADSB flight data I estimate the aircraft was flying at about 40 feet while flying over spectators," Murphy said.

Plane spotters frequent the island in hopes to get close-up pictures and videos of aircraft as they approach the beach. Earlier this year, warning signs were placed on the road near the airport to inform onlookers of the dangers of overhead airplanes, according to Euronews.