The video showed a whirlwind of dust as a man in awe filmed the spectacle. The landspout was one of several to strike Texas on Monday evening, and although landspouts are different from tornadoes, they can still cause damage.

As scattered storms moved across the Panhandle of Texas on Monday evening, an awe-striking video captured a massive landspout that picked up dust and swept across a field in Dumas, just north of Amarillo.

"Look at that," Ruben Ortega could be heard saying as he captured the video, which shows cars and other onlookers in the foreground and the whirlwind of dust can be seen spinning off in the distance. "Look at that tail," he continued before the camera spans upward to show the rope-like structure of the spout as it meets a thunderstorm cloud above.

The National Weather Service (NWS) office in Amarillo issued numerous special weather statements for the area on Monday evening as multiple landspouts were reported. The NWS warned of gusts up to 55 mph and half-inch-sized hail.

While the landspout captured in the video resembled a tornado, there is a difference between the two -- and it has to do with how they form. 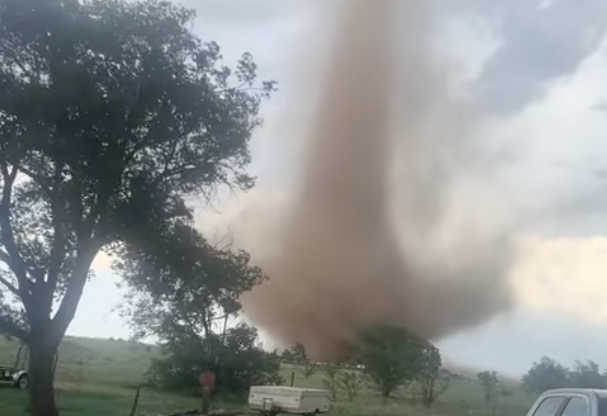 A tornado forms when a rotating supercell, which is a strong to severe thunderstorm, touches down to the ground. On the other hand, a landspout develops from ground circulation that gets sucked up into a storm.

"A landspout is a tornado with a narrow, rope-like condensation funnel that forms while the thunderstorm cloud is still growing and there is no rotating updraft -- the spinning motion originates near the ground," the National Oceanic and Atmospheric Administration (NOAA) National Severe Storm Laboratory (NSSL) wrote.

A landspout can also form when there is no severe thunderstorm present at all under the right atmospheric conditions.

Landspouts tend to be very weak and short-lived, lasting for only a few minutes. However, they can be strong enough to cause some damage, which is typically equivalent to the damage an EF0 tornado would cause.

Much like landspouts, waterspouts can form when no severe thunderstorm is present. These "fair-weather waterspouts" are more common than landspouts and can develop under clouds associated with lake-effect rain and snow showers around the Great Lakes.

And just like landspouts, waterspouts are smaller and weaker than tornadoes, but they can still be strong enough to overturn boats and create rough seas.