Businesses are reopening and power is being restored across Key West after Elsa brought 4 inches of rain and 70-mph wind gusts to the southernmost point of America.

Tropical Storm Elsa made landfall in Taylor County, Florida, north of the city of Steinhatchee, around 11 a.m. Wednesday as torrential rain and gusty winds pounded the state. At landfall, Elsa was packing sustained winds of 65 mph and was moving northward at 14 mph. AccuWeather meteorologists say the storm will continue to unload heavy rain, gusty winds and bring the risk of severe thunderstorms, including the risk of tornadoes and waterspouts, as it accelerates northeastward over the southeastern United States into Thursday night.

Elsa restrengthened into a Category 1 hurricane as it paralleled Florida's Gulf coast around 8 p.m. EDT Tuesday evening with maximum sustained winds of 75 mph. The tropical cyclone spent about six hours as a hurricane during Tuesday night before it weakened once again to a tropical storm at 2 a.m. EDT Wednesday while churning west of Tampa. 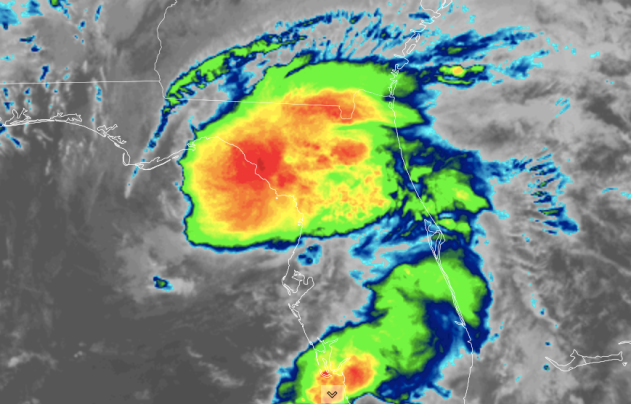 AccuWeather forecasters rated Elsa 1 on the AccuWeather RealImpact™ Scale for Hurricanes prior to it moving onshore in Florida, due to the system’s torrential rainfall, storm surge flooding and the potential for damaging winds and tornadoes.

Elsa rolled through northern Florida as a tropical storm as opposed to a hurricane, but AccuWeather forecasters noted that there is only a small difference in intensity between a tropical storm versus a Category 1 hurricane on the Saffir-Simpson hurricane scale. Next in the path of Elsa were the states of Georgia and South Carolina during Wednesday night.

Hurricane warnings were changed to tropical storm warnings as the storm moved over land, according to the National Hurricane Center (NHC). Storm surge warnings remained in effect along the west coast of the Sunshine State Wednesday. 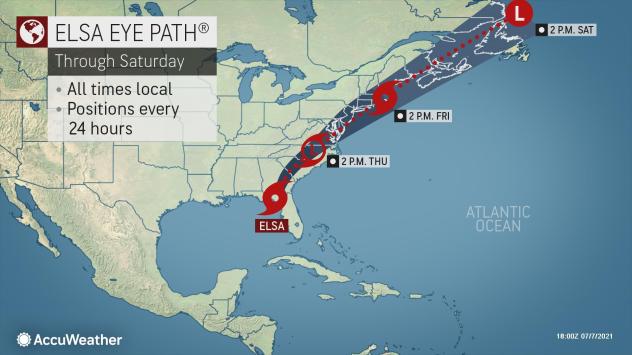 During an interview on the AccuWeather network Wednesday, National Hurricane Center Director Ken Graham reiterated what AccuWeather has been stressing for days that "people should focus on impacts with Elsa, rather than storm intensity."

Through Wednesday morning, "Elsa's wind intensity has been fluctuating by 10-15 mph and teetering on the edge of a hurricane and strong tropical storm, but there is little difference in impacts in this case," Graham said. 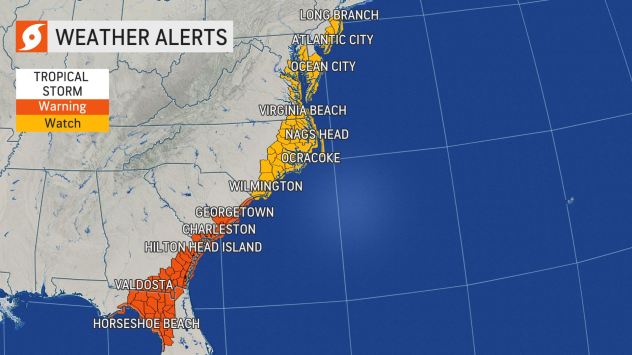 Since Elsa is forecast to produce severe thunderstorms, there is also the risk of quick spin-up tornadoes and waterspouts that can occur with little notice. Where these storms hit, damage can be more significant with a higher risk to lives and property. In some cases, tornadoes could be wrapped in rain and difficult to spot.

Wind gusts of 40-60 mph with an AccuWeather Local StormMax™ of 80 mph are expected mainly over over the northern portion of the Florida Peninsula.

Gusts to this level can also occur in spiral bands that contain severe thunderstorms much farther to the south and east over the peninsula. For this reason, damaging winds and power outages can occur hundreds of miles to the northeast of Elsa's landfall point. 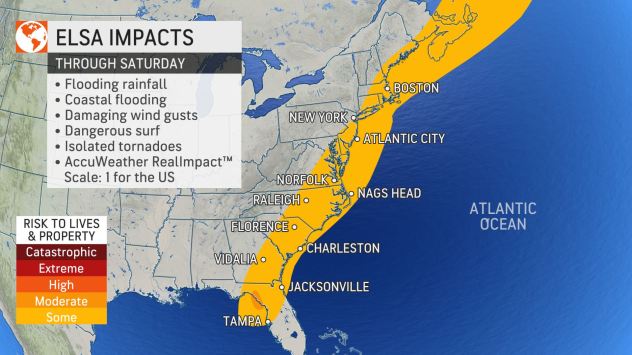 The risk of flooding rainfall will occur well to the north of east of where Elsa came ashore in Florida.

Since Elsa is moving along and is expected to increase its forward speed, rainfall will fall well short of that of slow-moving tropical cyclones, such as Florence, which unleashed catastrophic flooding in the Carolinas in September of 2018. Still, enough rain is projected to occur over several hours to trigger urban and low-lying area flooding as well as flooding of small streams and rising waters in some rivers along the southern portion of the Atlantic Seaboard. 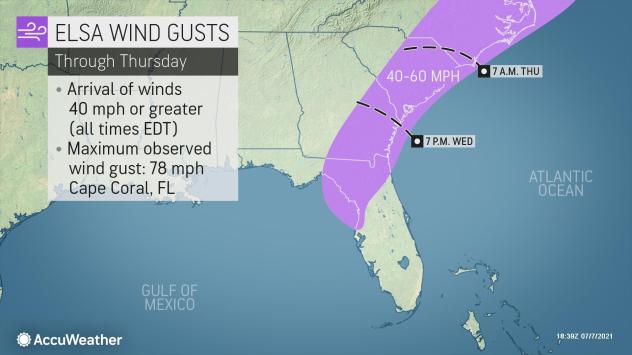 "Tropical cyclones are very efficient rainfall producers and 90% of fatalities from tropical cyclones are due to rising water associated with heavy rain and storm surge," Graham said, adding that he has seen "time and time again where people get in trouble driving around through floodwaters."

Motorists are urged to never drive through flooded roads. The water may be rising and deeper than it appears, and roadways can be washed away beneath floodwaters. Severe electrical damage can occur to vehicles even if only partially submerged.

Rainfall totals of 4-8 inches with an AccuWeather Local StormMax™ of 15 inches are expected along Elsa's track through the Florida Peninsula, southeastern Georgia, the South Carolina midlands and low country, central and eastern North Carolina and southeastern Virginia. 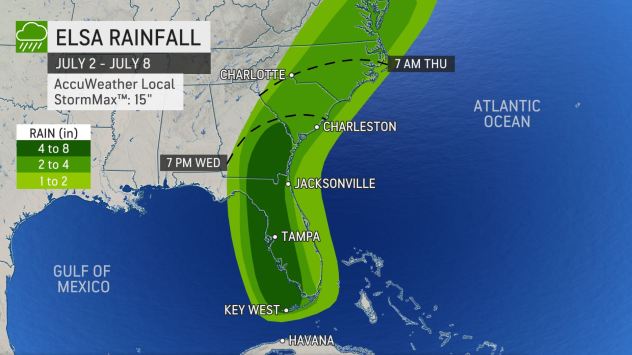 Periodic downpours and gusty thunderstorms along the Florida Atlantic coast are also expected. These can disrupt recovery operations at the site of a deadly building collapse in Surfside, Florida, last week.

Water levels peaked at 2.29 feet above normal in Tampa Bay, Florida, Wednesday morning, according to data from National Oceanic and Atmospheric Administration (NOAA) tide sensors. A storm surge of 2.56 feet was measured at Cedar Key, Florida.

Into Wednesday night, southeasterly winds around the circulation of Elsa will tend to push Atlantic water toward the Georgia and South Carolina coasts, where a rise in water levels of 1-3 feet are forecast. Water levels are forecast to slowly fall along the upper west coast of Florida during this time. 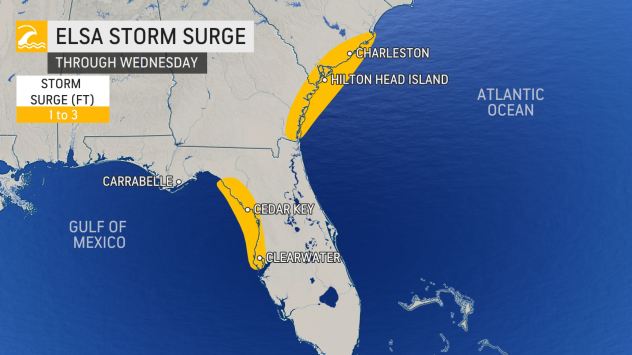 Since Elsa is not expected to wander very far inland over the southeastern U.S., it is likely to retain many tropical characteristics and its circulation.

Elsa will continue to generate enough of a circulation to push water toward the Carolina and Georgia coasts through Thursday. This means that water will have to escape in narrow channels known as rip currents. These shifting rivers of ocean water can be frequent and strong and pose a serious risk to bathers.

Near and just east of the tropical cyclone's center, the risk of isolated tornadoes and waterspouts are forecast to continue as it moves inland over the Southeastern states.

The system is expected to lose some wind intensity while over land and it is expected to be downgraded to a tropical depression over Georgia or the Carolinas. But, AccuWeather forecasters urged people not to focus on Elsa's official designation as the tropical cyclone travels northeastward along the Atlantic Seaboard late this week. There is little difference in wind intensity between a tropical storm and a tropical depression. 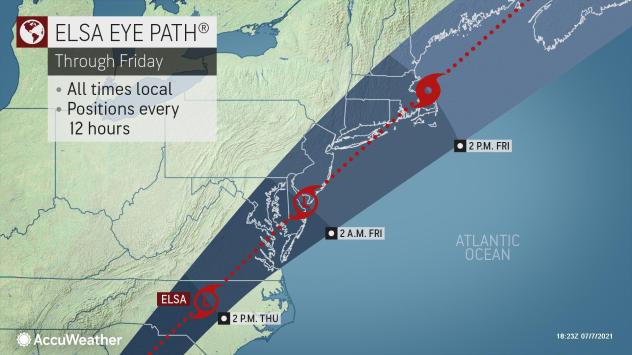 The main impacts north of Florida will be from flooding rainfall, locally damaging winds and progressively more isolated severe thunderstorms.

Elsa is predicted to emerge off the mid-Atlantic coast and pick up forward speed later Thursday into Friday. It is expected to regain tropical-storm force for a time over the western Atlantic, and its track will allow impacts to continue along the Northeast coastline.

Portions of the Florida Keys were hammered by heavy rain and gusty winds on Tuesday. 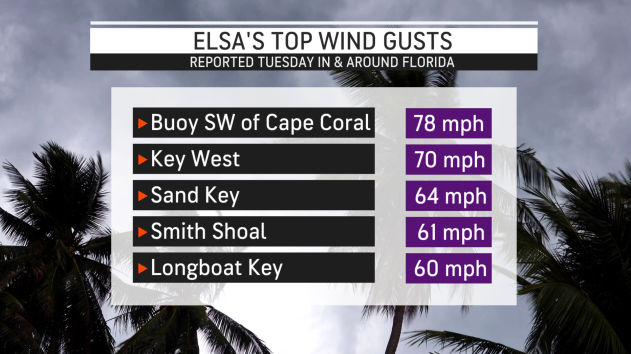 More than 10 inches of rain has fallen on the towns of Port Charlotte (10.88 inches) and North Port (10.08 inches) in Florida as of Wednesday morning. Radar estimates indicated that some areas may have picked up more than a foot of rain, according to AccuWeather Senior Weather Editor Jesse Ferrell. 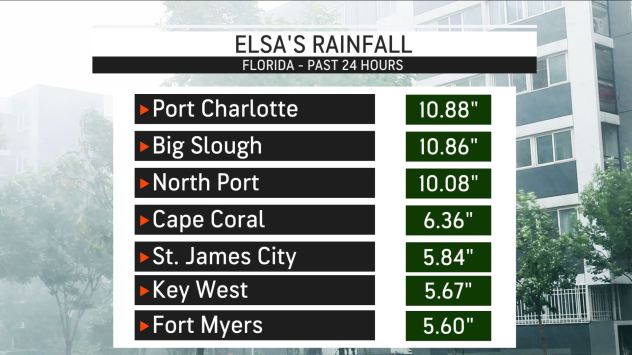 As AccuWeather had predicted, Elsa became the Atlantic's first hurricane of the 2021 season while approaching the Windward Islands last Friday morning. Elsa was attributed to one fatality, downed trees, flooding rain and power outages in the Windwards. The system underwent rapid strengthening from Thursday morning to Friday morning of last week with winds increasing 35 mph in 24 hours from 40 mph to 75 mph. Elsa's maximum sustained winds peaked at 85 mph later Friday.

The tropical cyclone then weakened slightly to a tropical storm while racing westward across the Caribbean this past weekend, but it caused two fatalities in the Dominican Republic.

The storm weakened further after it tracked across Cuba on Monday but began becoming better organized after moving over warmer waters of the Gulf.