Is there a way to save more lives when deadly hurricanes strike? 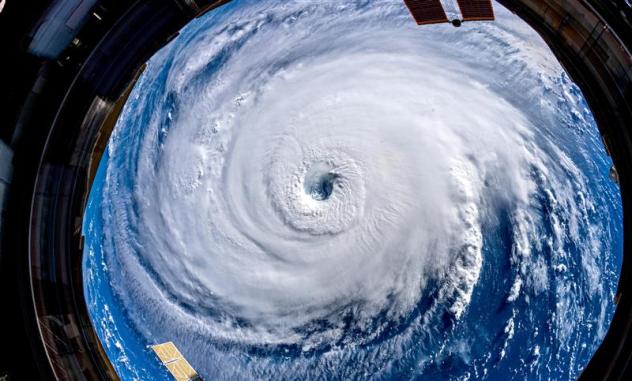 It doesn’t take much for people to take notice when a hurricane forms, particularly those who may be impacted.

“You see these storms each year, and whether they’re coming your way or not, you’re always going to pay attention,” Mandeville, Louisiana, resident Emile Buccola, who has experienced close to a dozen hurricanes as a lifelong Southerner, told AccuWeather. “If a hurricane gets in the Gulf of Mexico, you’re paying attention to everything that’s going on.”

The Weather Enterprise for many years has discussed and debated the need for a way to communicate the powerful overall impacts of a hurricane, understanding that the Saffir-Simpson Hurricane Wind Scale, which has been used by meteorologists for decades, classifies storms by wind speed only.

AccuWeather’s answer is a revolutionary new scale introduced in January based on a broad range of important factors to help people and businesses better understand the full impact of hurricanes and tropical storms. The new AccuWeather RealImpact Scale for Hurricanes is based on four very important contributing factors: high winds, of course, but also flooding rain, storm surge and the financial damage and economic impact from the storm. (For more details, click here.)

“The long-used Saffir-Simpson scale on its own doesn’t capture all the severe and important impacts of hurricanes and none of the impacts from tropical storms, such as coastal storm surge and flooding rainfall, which, on average, are the primary cause of death and destruction due to hurricanes,” said Dr. Joel N. Myers, founder and CEO of AccuWeather. 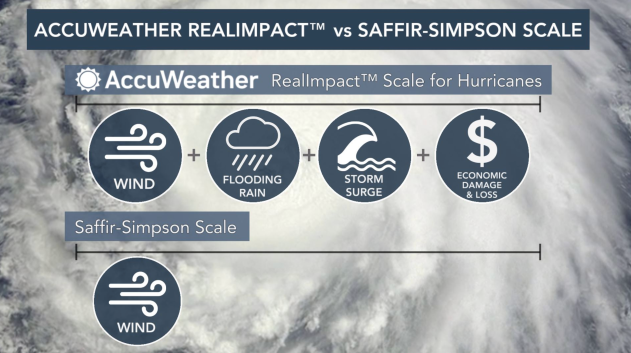 Hurricanes Laura in 2020, Florence and Michael in 2018, Harvey in 2017, along with other recent storms are the latest proof that such storms’ impacts are long-term and extensive and the total impact was not ever conveyed by the traditional rating scale.

“You have to look at all of the [possible factors],” Director of South Carolina Emergency Management Kim Stenson told AccuWeather. He oversaw the state’s handling of Category 1 Hurricane Florence. “The storm surge, you have to look at the inland flooding, and certainly the wind is a part of that process.”

‘Focus on the hazards’

More people are killed by water in hurricanes, particularly through inland flooding and storm surge, than by the storm’s wind. That’s why the National Hurricane Center (NHC) stressed that people should not just gauge a storm’s impact by its Saffir-Simpson categorization.

“How many times have you heard the expression, ‘It is only a Category 1 hurricane?’ Since 2010, those storms have caused 175 direct deaths and about 103 billion dollars of damage in the United States. Focus on the hazards, not the category!” – A tweet from the NHC

“You have to learn,” Wilmington, North Carolina, resident Emily Krueger told AccuWeather. “Probably only until a couple of years ago did I realize there could be flooding after the storm. I thought the storm happened, it rained and flooded, and that was it.”

Parts of Wilmington became an island because of flooding that persisted for up to 10 days after the arrival of Florence – a Category 1 hurricane that brought extended rounds of rain.

“I didn’t realize that the rivers and every creek flooded afterwards, too,” Krueger said. “People really do have to learn.”

On the AccuWeather RealImpact Scale for Hurricanes, Category 1 Hurricane Florence would have been an AccuWeather RI4 hurricane, according to AccuWeather’s Vice President of Business Services and General Manager of Enterprise Solutions Jonathan Porter.

“There’s been a long-standing understanding within the weather community and elsewhere that we need better, more effective ways to communicate hurricane risks to the public and to businesses so that they can make better decisions,” Porter said. “At the end of the day, that’s what we’re here to do.”

5 deadliest hurricane-related dangers
Hurricane hunters fly into dangerous hurricanes – all in the name of science
Avoid these 5 common, potentially deadly mistakes when a hurricane strikes your area
5 expert tips for protecting your home against hurricane damage
Why you should evacuate ahead of a hurricane

Hurricane Harvey, which caused hazardous rainfall and extensive flooding in the greater Houston and surrounding areas, led to significant deaths, damage and destruction with sustained winds of 130 mph, making it a Category 4 storm on the Saffir-Simpson scale.

On the AccuWeather RealImpact™ Scale for Hurricanes, Harvey would have been designated as an AccuWeather RI5 hurricane because of the additional impact of the flooding and the winds.

Longtime Houston resident Sherea Cary told AccuWeather, “The problem [with Harvey] was the continuous rain, so we had flooding. The system just sat over Houston and there was no break in the rain. That was our problem … the amount of rain – more than 20 inches – gave no time for the water to recede.”

In fact, nearly 50 inches of rain fell over parts of southeastern Texas and southwestern Louisiana from Harvey, leading to catastrophic damage.

‘Things are just starting to get back to normal’

The impact of hurricanes and tropical storms goes beyond just the flooding and immediate damage. There are longer-term impacts: potential disease spread and mold; businesses closed and some never to reopen; lost revenue due to temporary or permanent closings; crop and agriculture damage and loss; and other economic-related effects impacting retail, shipping, insurance and more that need to be considered.

The AccuWeather RealImpact Scale for Hurricanes weighs those factors and has been well-received in some corners, while being questioned in others.

“People in the industry admit there are major shortcomings to the existing Saffir-Simpson Wind Scale,” said Myers. “So, while the AccuWeather RealImpact Scale for Hurricanes is not perfect, it is significantly better in helping people judge the impact of hurricanes and tropical storms in advance.”

South Carolina’s Kim Stenson, the emergency management director, saw that impact firsthand. “We’ve had a lot of issues with the inland flooding that takes place as part of the hurricane system …” he told AccuWeather. “The flooding usually does not happen immediately." 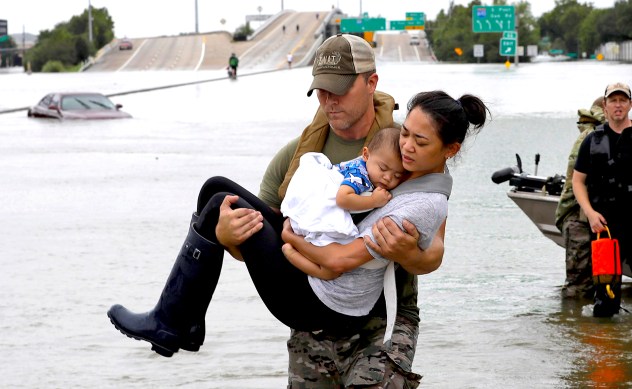 “Unfortunately, there’s also flash flooding that takes place as well, especially in some of the urban areas, places where there’s no place for the water to drain,” he added. “The drain water systems are not adequate enough to handle 20 inches of rain over a very short period of time. There are a lot of variables involved.”

That’s why AccuWeather's Jon Porter sees a need being served. “We think that others will reference AccuWeather’s new innovation in this area as another way to help communicate the impacts of these storms,” Porter said.

The effect of tropical storms and hurricanes such as Florence on places like Wilmington won’t be forgotten – nor will how it affected the community, according to Emily Krueger, who evacuated when the state recommended.

“I have many friends who stayed and wished they hadn’t,” Krueger told AccuWeather. “With the power outages and then the flooding afterwards, it caused a lot of people to be stuck – whether you left or you stayed…

“I feel like just now [more than eight months later], things are starting to get back to normal,” she said.

AccuWeather’s RealImpact™ Scale for Hurricanes is a registered trademark of AccuWeather.

Download the free AccuWeather app to keep up-to-date with the latest severe weather alerts for your area. Check back for updates on AccuWeather.com and stay tuned to the AccuWeather Network on DirecTV, Frontier and Verizon Fios.