Find out what the five deadly hurricane dangers are.

Beneath the surface of the giant, swirling tropical cyclones known as hurricanes lie five factors that generate the biggest threats.

While dangerous in their own right, they often combine to inflict substantial damage upon structures, the environment and lives.

A hurricane’s deadliest aspect is storm surge, which is an abnormal rise in sea level.

“The storm surge, by far, creates more damage because it’s coming in like a large wave, a large flow of water, and basically mowing everything down with that water,” said AccuWeather Senior Meteorologist Dan Kottlowski.

Many of Hurricane Katrina’s 1,500 victims died as a direct or indirect result of storm surge, according to the National Oceanic and Atmospheric Association (NOAA).

According to the National Weather Service (NWS), storm surge can reach heights exceeding 20 feet and can travel several miles inland, threatening the environment.

“[It] brings salt water inundation, which is detrimental to plant life and soil,” said Dr. George Maul, professor of oceanography at the Florida Institute of Technology.

In 2012, Hurricane Sandy’s storm surge of 20-25 feet moved more than half a mile inland, flooding freshwater bodies of water with sea salt.

Storm surge is a major component of hurricane-related flooding.

According to the National Hurricane Center, Hurricane Katrina’s storm surge flooding in 2005 reached more than 25 feet above normal tide level along parts of the Mississippi and Louisiana coasts.

Hurricanes are notorious for producing torrential rain that causes flash flooding, which is a major threat for people living inland, particularly in urban areas. 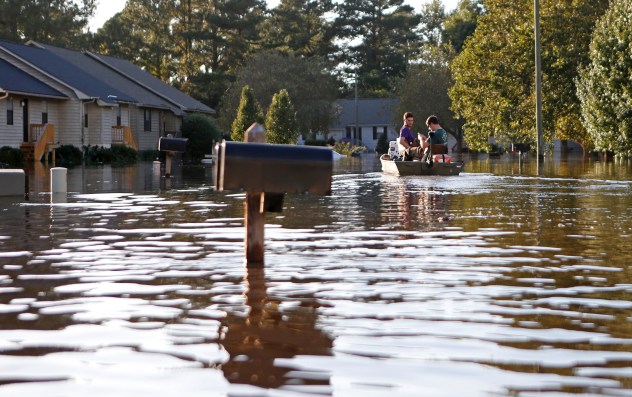 Two men pilot their boat through the streets of their neighborhood, flooded by water associated with Hurricane Matthew on Wednesday, Oct. 12, 2016, in Greenville, N.C. (Photo/AP Photo/Brian Blanco)

“There can be problems like storm drains being blocked or just not enough area for the water to go, so it can kind of pool up – particularly with underpasses,” said Dr. Corene Matyas, associate professor for the University of Florida’s geography department.

The Centers for Disease Control and Prevention (CDC) stated that the majority of flood-related deaths occur from walking or driving into hazardous floodwater.

“There have been a lot of people who have died because they’re driving and they turn on to what they think is a road and they fall in a canal or a ditch,” said Matyas.

Hurricane-force winds are capable of significant and costly damage.

Coastal structures are the most vulnerable due to lack of obstacles in the way of winds blowing over water.

“Surface winds are reduced somewhat over land because of trees and other buildings which partly reduce the wind speed," said Dr. Albert Bleakley, associate professor of construction management at the Florida Institute of Technology.

They can also topple trees and transform debris into deadly flying missiles.

“Damage from wind-blown debris is the most preventable problem,” Bleakley said.

Home safeguarding steps include preventative maintenance such as inspecting and repairing roofs, screens and awnings.

Strong winds are responsible for life-threatening rip currents even when a hurricane is miles offshore.

Rip currents are channeled currents of water that flow away from shore, past the line of breaking waves.

These currents pack enough strength to drag even the most experienced swimmers out to sea, according to the National Hurricane Center.

In 2008, three people were killed along New Jersey’s coast from rip currents caused by Hurricane Bertha, which was more than 1,000 miles away from shore.

Some of the most powerful winds inside of hurricanes are created by tornadoes.

Though relatively weak and short-lived, these tornadoes can still cause severe destruction. 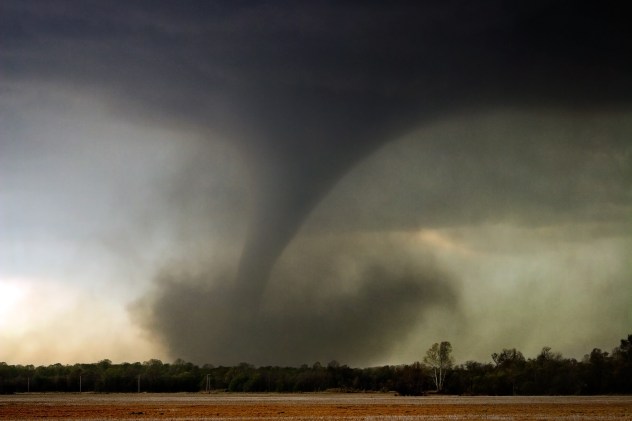 An F3 tornado touches down in a field. (Photo/ClintSpencer/Getty Images)

“On average, about 20 percent of all tornadoes that are caused in a given year are caused by hurricanes making landfall over the United States,” Kottlowski said.

“Whenever a hurricane makes landfall, usually it’s what we call the right front quadrant that’s most likely to produce the most tornadoes,” he said.

The right front quadrant is the upper right quarter of a hurricane if it were dissected into four sections.

Hurricanes can produce tornado outbreaks during the initial storm and for days afterward.

In 2004, Hurricane Ivan spawned a total of 120 tornadoes during its lifetime.

Safety measures can be taken to minimize damage and loss of life in all of these cases.

“[Weather radios are] the cheapest, safest way to deal with any approaching weather-related disaster,” Kottlowski said.