Cyclone Tauktae swept through western India bringing high winds, torrential rain and flooding. Many structures were left severely damaged along with fallen trees on May 18.

Rescue operations continued Wednesday across northwestern India in the wake of Cyclone Tauktae, including off the coast of Mumbai where the Indian Navy continued to search the choppy waters for victims of a barge that sank during the storm.

The dangerous storm left a trail of damage, with winds knocking over trees and power lines, and some areas were underwater due to the excessive rainfall and intense storm surge. The death toll continued to climb as the system rampaged over land.

Around 75 deaths have been attributed to the storm across five states in western India stretching from Kerala in the far southern part of the country to Gujarat in the northwest, according to CNN and The Associated Press.

At least 184 people have been rescued by the Indian Navy in rough seas with waves as high as 25 feet (7 m) after a barge sank off the coast of Mumbai, according to The Associated Press. Several ships and helicopters continue to search for 55 missing crew members.

Two other barges that had anchored near the coast of Mumbai have been confirmed to be floating safely about 22 miles (35 km) south of Diu in southern Gujarat, the Indian Coast Guard shared on Twitter.

Another barge became grounded with 137 people onboard on Tuesday, but everyone on board was successfully rescued by the Indian Coast Guard.

Local state disaster management authorities said the deaths were from people drowning at sea, houses collapsing, lightning strikes and other accidents linked to the severe weather.

On Wednesday, Prime Minister Narendra Modi conducted an aerial survey of the areas of Gujarat impacted by the cyclone, according to ANI. In a press conference, Modi announced that financial support would be provided to residents impacted by the storm.

To help the recovery process, almost 2,500 government rescue workers equipped with wireless radios, satellite phones, cutters and other tools have been deployed to southern and western India, areas that sustained the greatest impacts from the storm, the AP reported.

On Saturday, three fishermen had to be rescued by the Indian Coast Guard after their boat became marooned in the tumultuous sea off the coast of Kannur, Kerala, reported IANS.

While Pakistan avoided a direct hit from Tauktae, gusty winds from the storm produced a dust storm which hit the country's biggest city of Karachi on Tuesday, according to the BBC. This dust storm hit after several days of sweltering heat.

Tauktae made landfall near Jafarabad, India, late Monday evening as the equivalent of a Category 3 hurricane. Just hours earlier, the storm had reached peak intensity on midday Monday as an extremely severe cyclonic storm with winds of 115 mph (185 km/h), which would be rated a Category 4 hurricane on the Saffir-Simpson Hurricane Wind Scale used to rank storms that form in the Atlantic and East Pacific basins.

The storm began brewing late last week when a tropical depression formed to the west of southern India. It strengthened into the first cyclonic storm to develop in the Arabian Sea in 2021 at 11:30 p.m., local time, Friday. It was given the name Tauktae by the India Meteorological Department (IMD). AccuWeather forecasters have been warning since last week that the cyclone would take aim at India, which is currently engulfed in the world's largest COVID-19 outbreak.

According to Dr. Jeff Masters, a former hurricane hunter with the National Oceanic and Atmospheric Administration, Tauktae's one-minute sustained winds of 140 mph (225 km/h) on May 17 allowed it to become the fifth-strongest tropical cyclone on record in the Arabian Sea.

As the cyclone was strengthening offshore before landfall, more than 200,000 people in Gujarat were evacuated from coastal areas, said the state's chief minister, Vijay Rupani.

Even before Tauktae was a very severe cyclonic storm and still off the coast of western India, the storm dumped a "large excess" of rainfall across portions of the Indian states of Kerala and Karnataka on Saturday, according to the IMD. Some locations received as much as 14 inches (355 mm) of rain in just 24 hours. 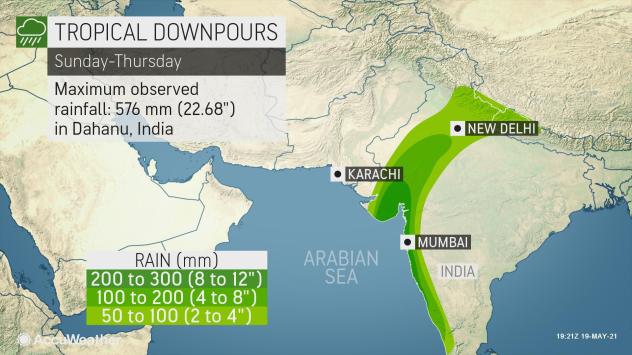 These areas can have 4-8 inches (100-200 mm) of rain through Thursday. Isolated amounts to 10 inches (250 mm) are possible, though rainfall is not expected to be as extreme compared to what was seen along the west coast of the country where an AccuWeather Local StormMax™ of 24 inches (600 mm) was expected.

Isolated flooding can occur across these areas, along with the threat for mudslides in Uttarakhand and western Nepal as rain from the cyclone falls in the Himalayan Mountains.

The strongest winds from Tauktae occurred across the Kathiawar Peninsula as the storm made landfall. Wind gusts were expected to reach as high as 100-120 mph (160-190 km/h) with an AccuWeather Local StormMax™ of 130 mph (210 km/h).

These winds have led to the loss of power in more than 2,435 villages in Gujarat, CNN reported.

Even though the wind intensity of the cyclone will continue to diminish as it tracks across northwestern India, there can still be isolated damage to trees, power lines and structures along its track across eastern Rajasthan, western Uttar Pradesh and the NCR.

Due to the impacts from heavy rain, flooding, strong winds and storm surge, Tauktae was rated a 4 on the AccuWeather RealImpact™ Scale for Tropical Cyclones. 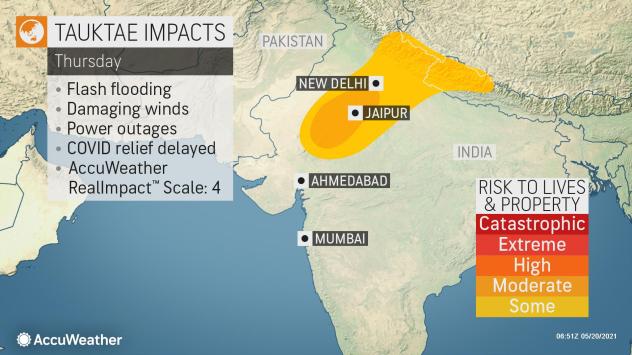 In preparation for the storm, Municipal Corporation of Greater Mumbai said on Saturday it will move 580 COVID-19 patients to other hospitals, ANI reported.

The approaching cyclone forced vaccination locations to close, Mumbai Mayor Kishori Padnekar said in a statement. Gujarat has also suspended vaccinations until May 20, according to the Chief Minister Vijay Rupani.

Amid the worsening health crisis, India has been regularly setting daily records of more than 400,000 new cases that have also turned into global records. The current world record of 414,188 daily cases was set in the country on May 6, 2021. The record high for daily deaths in the country was 4,205 on May 11. India's death toll since the pandemic began is more than 283,000, which is third behind Brazil (more than 439,000) and the U.S. (more than 587,000), according to Johns Hopkins University.

India reported a new world record for deaths reported in a 24-hour period on Wednesday, May 19 with 4,529. India’s daily death toll eclipsed the previous record that was held by the United States and set on Jan. 12 when 4,475 deaths were blamed on the coronavirus,

Many of the new cases have been brought on by a variant of the virus, which is said to be highly contagious. The World Health Organization recently labeled this mutation as a variant of concern and said it poses a global health risk, CNBC reported. Mass gatherings and religious festivals that drew millions of people in recent weeks have been cited as a key factor in the spread.

Even after Tauktae dissipates over land, AccuWeather Lead International Forecaster Jason Nicholls warned that additional tropical development in the Indian Ocean is possible through the end of May.

The season for tropical activity has no bounds in the Indian Ocean and Arabian Sea, said Nicholls, but it does have two peaks.

"The first of the two peaks in the calendar year is during the pre-monsoon period of April to June, and the second is after the monsoon, from September to December," Nicholls explained.