Hurricane warnings issued for entire coast of South Carolina as Ian moves off the coast of Florida
DEVELOPING: Millions without power in Florida as Ian continues to produce life-threatening flooding. Follow live updates.

A grid failure of the already fragile power system sent over a million residents into a blackout state Sunday.

A fragile power grid in Puerto Rico in the path of Hurricane Fiona has created an island-wide crisis, as the territory's electrical system went completely out of service due to Fiona, Governor Pedro Pierluisi announced.

On Sunday afternoon, a transmission grid knocked out 1.4-million tracked residents of the island, according to PowerOutage.US. Outages were at over 500,000 residents Sunday morning before the territory-wide blackout. Internet outages across the island also spiked as the power went out.

LUMA Energy, the private company that handles the transmission and distribution of electricity in Puerto Rico, stated that full power restoration could take days "due to the magnitude and scope of the blackout," but that the company has the necessary resources to respond to Fiona's effects on the grid.

“The damages that we are seeing are catastrophic,” Pierluisi said on Sunday, according to The Associated Press. 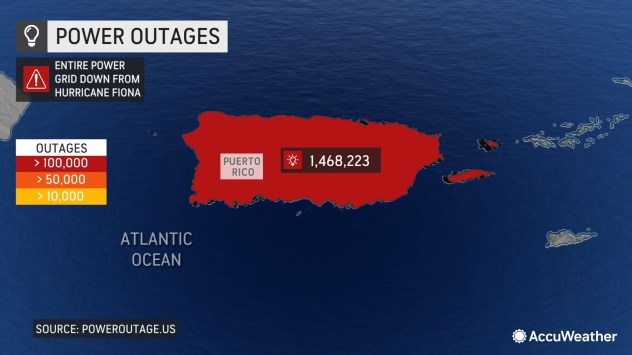 Faced with a crisis, Pierluisi received a sign of the island's perilous situation during a press conference on Saturday.

While in the middle of an update about Fiona's impact, the lights unexpectedly went out in the room where Pierluisi's briefing was held. The lights went back on after a brief blackout period, but the electricity mishap was more evidence of a fragile power grid on the island.

Pierluisi and his constituents have been worried about massive power outages for years after the island's power grid was wrecked by Hurricane Maria in 2017. Fiona's path coincides with the 5-year mark since Maria left much of the island in ruins.

As Puerto Rico‘s governor was briefing the island ahead of Fiona‘s impact the lights went out. The governor has already said LUMA Energy - the private company in charge of transmission & distribution of electricity on the island - is on probation with him. pic.twitter.com/YVEnPPcnZp

Pierluisi stated that LUMA Energy is "on probation" with the governor.

The lights unexpectedly went out as Puerto Rico Governor Pedro Pierluisi briefed reporters ahead of Fiona on Saturday, Sept. 17, 2022.

A hurricane warning was put into effect for Puerto Rico on Saturday morning, and AccuWeather forecasters warned that strong winds and heavy rains could bring life-threatening conditions to the island. In addition to the high winds that helped lead to widespread power outages, destructive flooding was ongoing as heavy rain fell over the same areas for hours on end.

12 to 24 inches of rain have already fallen over widespread areas on the island, according to the most recent observations. However, localized areas have had confirmed reports of over 24 inches of rain, with more still yet to come. 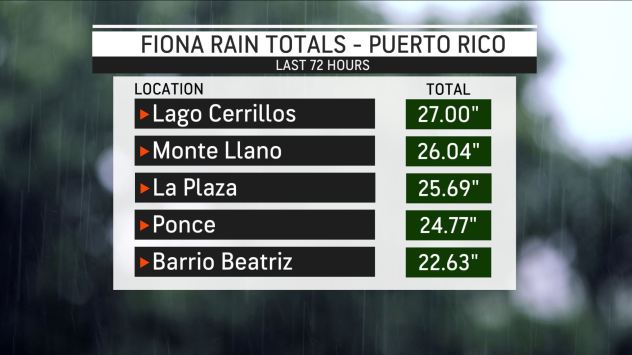 In total, 24 inches (610 mm) of rainfall is expected in certain areas, with an AccuWeather Local StormMax™ of 32 inches (810 mm) not out of the question in spots that receive the heaviest rainfall. Fiona has been rated a 3 for the Caribbean on the AccuWeather RealImpact™ Scale for Hurricanes.

Local authorities in Puerto Rico opened shelters in advance of Fiona, according to The Associated Press, and transferred hundreds of endangered parrots to the shelter. Public beaches, casinos, theaters and museums were closed as residents were urged to remain indoors. Pierluisi stated that $550 million in emergency funds were available for the storm's aftermath, and enough food has been made available to feed 200,000 people three times a day for 20 days.

Elsewhere in Puerto Rico, city hall in Old San Juan on the northern coast of the island was closed down and protected by storm shutters and workers outfitted windows and doors of businesses with storm shutters in preparation of Fiona's arrival. In Loaiza, also on the northern coast of Puerto Rico, and east of San Juan, news photos showed residents boarding up the windows of their homes.

Dr. Gloria Amador, head of a nonprofit health organization in central Puerto Rico, stressed the serious nature of the situation to the AP.

"It's time to activate your emergency plan and contact and help your relatives, especially elderly adults who live alone," Amador told the AP.

Reuters reported Saturday that Fiona was blamed for at least one fatality in the French Caribbean archipelago of Guadeloupe, which is a part of the Leeward Islands. Video footage that surfaced on social media Saturday showed raging floodwaters in city streets there as Fiona pulled away.

Hurricane Ian pounds Florida in what stands to be 'a life-changing eve...