After Caribbean, Bermuda and Canada next in line for Hurricane Fiona's wrath

AccuWeather forecasters say Fiona will strengthen to a Category 4 force as it comes perilously close to Bermuda later this week. And rough surf will be felt up and down the U.S. East Coast.

And, even though the threat of direct impacts to the United States has diminished, beaches up and down the Eastern Seaboard will still feel Fiona's effects in the form of dangerous surf.

Forecasters project Fiona will track northward over the western Atlantic Ocean. The storm's destructive eyewall was brushing the eastern part of the Turks and Caicos Islands on Tuesday as it continued to gain wind intensity. Early Tuesday morning, Fiona strengthened to Category 3 on the Saffir-Simpson Hurricane Wind Scale. The storm was packing 115 mph sustained winds at midday Tuesday as it moved north-northwest at 9 mph over the Atlantic Ocean.

With Fiona now being the first major hurricane in the Atlantic this season, the storm is expected to strengthen even more, reaching Category 4 status southwest of Bermuda and east of the Bahamas with sustained winds from 130 to 156 mph (209-251 km/h).

Last week, AccuWeather meteorologists were analyzing two scenarios at play with Fiona's path once it crossed the northern Caribbean -- one that whisked the storm out to sea and another that caused Fiona to sit and spin in the western Atlantic for days, before possibly turning toward the east coast of the United States.

Forecasters now say the atmospheric puzzle pieces have come together to offer a clearer picture of Fiona's path during the middle and latter part of the week. 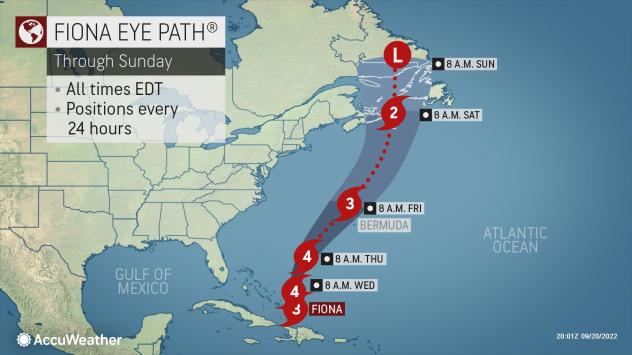 A plunge of cool air associated with a cold front is expected to arrive in the Northeast just in time for the official start of fall on Thursday, Sept. 22. AccuWeather's expert team of meteorologists knew that the timing of this front would be key in determining which scenario played out and say its projected speed is promising for shielding the U.S. from direct impacts.

"Fiona will likely interact with the incoming cold front later this week, causing the storm to pick up speed and turn northeastward, potentially passing close to Bermuda," AccuWeather Senior Meteorologist Dan Pydynowski said, noting that this northeastward curve is a common track for Atlantic hurricanes. 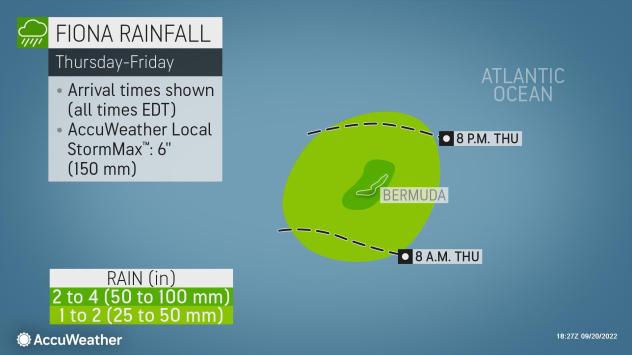 Bermuda and Atlantic Canada are being put on alert for the possibility of direct impacts from Fiona, with Bermuda being first in line to feel the storm's effects by week's end. Less than two weeks ago, Bermuda had a close encounter with powerful Hurricane Earl, though the center of the storm stayed far enough away for the worst of the rain and wind to stay over the open waters.

AccuWeather's current Eye Path® for Fiona puts Bermuda in line for drenching tropical downpours, with a majority of the islands projected to receive at least 2 inches (50 mm) of rain from Thursday to Friday. The AccuWeather Local StormMax™ rainfall is 6 inches (150 mm), which can lead to localized flooding in poor drainage areas. 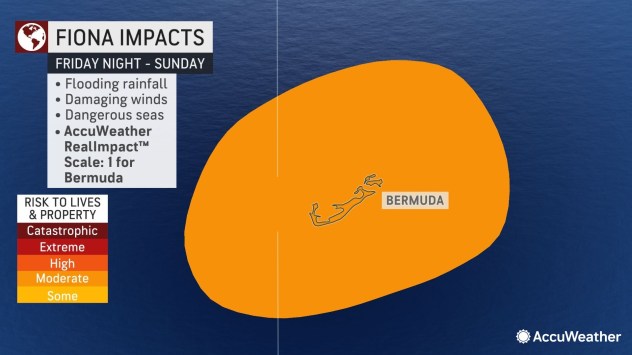 The exact severity Fiona's winds will have on Bermuda will depend on a number of factors, including how close the center of the storm brushes past Bermuda as well as the intensity of the hurricane and the size of the eye when the storm makes its closest approach to the islands.

Current projections place the region in line for wind gusts of at least hurricane-force (maximum-sustained winds at or above 74 mph or 119 km/h) from Thursday through Friday with an AccuWeather Local StormMax™ wind gust of 120 mph (195 km/h). 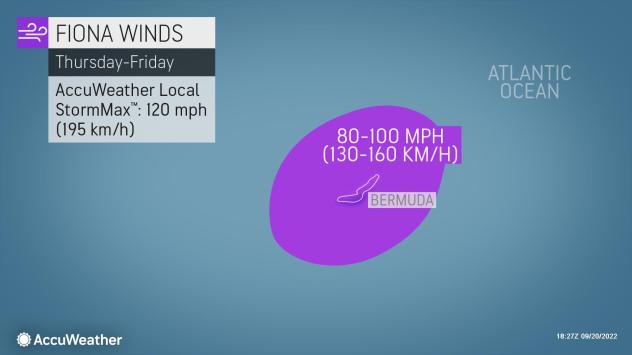 Occasionally, powerful hurricanes experience what is called an eyewall replacement cycle, which a new eye forms inside the center of the storm. When this occurs, sometimes the strongest winds from the eye wall can temporarily be pushed outward from the center, until the new eyewall forms.

Forecasters encourage residents to secure or stow away outdoor items that could turn into deadly projectiles in such winds. Any shift in the track of Fiona farther away from Bermuda would lessen impacts from the wind, but a shift closer to the islands could put the region in line for more severe wind impacts.

Strict building codes in Bermuda allow the region to withstand a high-end Category 2 hurricane (maximum sustained winds of 96-110 mph or 154-177 km/h) with minimal impact and damage. AccuWeather meteorologists are forecasting Fiona to be a Category 3 major hurricane during its closest approach to Bermuda. 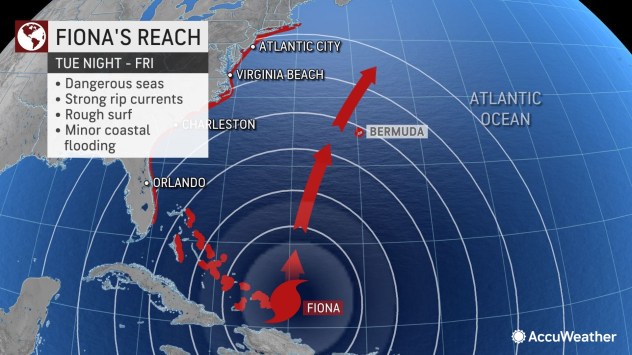 As Fiona tracks north and then northeast across the western Atlantic Ocean, the sea will be churned up significantly, resulting in an expansive swath of coastline being at risk for dangerous surf and rip currents from the Bahamas to the Eastern Seaboard of the United States.

The East Coast beaches of the U.S. will experience high waves, strong rip currents, minor beach erosion, and minor coastal flooding around times of high tide much of this week as Fiona passes by offshore, according to Pydynowski. Experts urge beachgoers to heed all advisories hoisted along the beaches and avoid venturing into waters that are not supervised by lifeguards at this point in the year. Operators of small craft may also need to exercise caution.

The southeast U.S. was brushed by two weak tropical storms, Bonnie and Colin, earlier in the season, but the continental U.S. has dodged any more significant impacts this season. Earl was the closest approach of a hurricane so far this season, and it stayed about 800 miles away from the East coast. Still, the storm stirred dangerous surf and rip currents, which resulted in at least two fatalities.

Since this past weekend, AccuWeather meteorologists were already warning interests in Atlantic Canada to brace for Hurricane Fiona by the upcoming weekend. There is the potential for Fiona to hit the Gulf of St. Lawrence region with the force of a Category 2 hurricane directly from the south or southeast as early as Friday night. 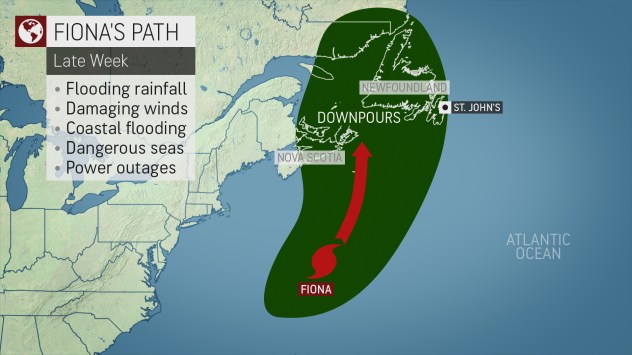 "By the time Fiona reaches Canada, heavy rain and damaging winds are likely to cover a much broader area than when the storm is farther south, leading to more far-reaching impacts," AccuWeather Meteorologist Andrew Johnson-Levine explained, noting that an expansive region of strong winds is a common feature with hurricanes at such a high latitude.

These widespread winds are set to be on display in Canada this weekend, with impactful wind gusts stretching from New Brunswick to the eastern tip of Newfoundland. Near the center of the storm, winds may become downright destructive, and the AccuWeather Local StormMax™ of 120 mph (195 km/h) cannot be ruled out in this region.

Interests from Nova Scotia to Newfoundland and Labrador are encouraged to keep a close watch on Fiona's track this week and be ready to make necessary preparations.