Officials blamed at least four fatalities in the northern Caribbean on the storm. Meanwhile, AccuWeather's founder estimated that Fiona would have a $10 billion impact on Puerto Rico's economy, likening the fallout to "a severe recession."

Torrential rainfall unloaded by Hurricane Fiona continued Monday across Puerto Rico as well as the Dominican Republic, where the storm made a second landfall very early in the day, leading to catastrophic flooding and at least three fatalities, officials said.

More than 24 hours after the electricity went out for the entire island of Puerto Rico, nearly 1.3 million customers remained without power early Tuesday morning – one of the reasons AccuWeather is estimating the economic impact on the island from Fiona to be about $10 billion. While power has been restored in a few isolated areas, over 85% of the island's population remains in the dark.

The blackout was responsible for one of two deaths across Puerto Rico, The Associated Press reported. A 70-year-old man was killed when he tried to fill a generator with gasoline while it was running, setting it on fire. Also among the dead was a 58-year-old man who died when he was swept away by an overflowing La Plata River behind his home in Comerio, Puerto Rico, a spokesperson for Gov. Pedro Pierluisi told CNN.

And in the Dominican Republic, officials told local media that Isidro Quiñones, in his 60s, died when a tree fell on him in Nagua, marking a fourth fatality due to Fiona.

Early Tuesday morning, Fiona strengthened to a Category 3 hurricane on the Saffir-Simpson Hurricane Wind Scale, with maximum sustained winds of up to 115 mph. The hurricane made landfall as a Category 1 storm at 3:20 p.m. EDT Sunday, Sept. 18 on the extreme southwestern coast of Puerto Rico, near Punta Tocon. Roughly 12 hours later, Fiona made landfall at a similar intensity near Punta Cana, on the eastern coast of the Dominican Republic.

LUMA Energy, the private company that handles the transmission and distribution of electricity in Puerto Rico, stated that full power restoration could take days "due to the magnitude and scope of the blackout."

By Tuesday morning, the power had been restored to around 200,000 customers, including hospitals in San Juan's medical complex, according to Puerto Rico Health Secretary Dr. Carlos Mellado Lopez.

"The electrical system in all hospitals in the Medical Center Complex has been restored," Lopez wrote on Twitter. "Our patients are safe and receiving the medical attention they require."

As floodwaters rose, a blanket of brown water covered everything, submerging cars, first-floor apartments and even an airport runway on the island's southern region.

“Hurricane Fiona will have a major negative impact on the economy of Puerto Rico,” said AccuWeather Founder and CEO Dr. Joel N. Myers, who projected that the fallout from the storm will be about $10 billion in Puerto Rico alone. “Since Sunday afternoon there has been a major failure of the electrical grid resulting in an outage of power to the entire island impacting more than 1.4 million customers, or 3.2 million people, and only 100,000 customers, less than 10 percent, apparently have restored power currently,” Myers said Monday evening, explaining how he arrived at the figure. “In addition, water service is not available to over 750,000 customers or more than 2 million people."

To put AccuWeather’s estimate for the total economic loss from Fiona into perspective, Hurricane Maria caused $90 billion in damages, according to AccuWeather, and later NOAA, estimates. The lingering effects of Fiona in Puerto Rico will be brutal, Myers suggested.

“The GDP of Puerto Rico is about $103 billion per year,” said Myers. “An economic impact of around $10 billion is slightly less than 10 percent of the GDP, but, significantly, it is equivalent to a severe recession.”

Myers also pointed out that the capital and largest city, San Juan, has largely avoided the worst of the flooding and wind damage.

Ryan Gorman, 40, works in finance and lives in old San Juan with his wife and young son. He grew up in the New York City area and lived in Japan for several years and has lived through severe tropical cyclones before, including Superstorm Sandy 10 years ago and a typhoon while living in Tokyo, he told AccuWeather.

"The height of the storm was intense. Howling winds and driving rain. The wind sounded like a freight train," Gorman said, "but it was otherwise silent outside when I opened the balcony door to gauge how intense everything was."

Gorman said they were fortunate that the flooding and damage in Old San Juan wasn't too bad from what he could tell on Monday morning.

"What's happening in the countryside and south coast, though -- it's heartbreaking," he said.

More than 778,000 residents in Puerto Rico were without drinking water as of Monday, El Nuevodia, a local news source reported. According to the report, of the 112 filtration plants, most of them are supplied with water from the rivers. The river level must decrease to a certain level before it is deemed safe for personnel to resume cleaning the water. 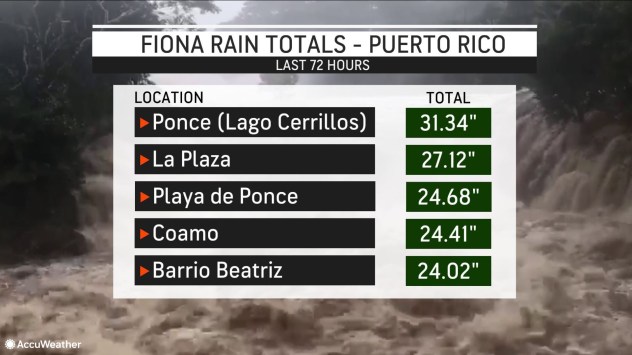 Manuel Crespo, a news reporter and weather anchor for TeleOnce, was on the scene in southwestern Puerto Rico on Monday morning and noted that torrential rain and wind were still pounding the area as authorities were rescuing people who were left stranded in their homes following flooding.

Crespo told AccuWeather that the flooding from Fiona was “worse than people thought [it would be],” adding that people he spoke with were not prepared for this amount of rain.

AccuWeather meteorologists expect more rain to fall through Monday, which could result in some areas hitting the 30-inch mark.

"The damages that we are seeing are catastrophic," Pierluisi said, the AP reported.

A bridge, which was installed by the National Guard after Hurricane Maria hit in 2017, was washed away after heavy rainfall triggered a large landslide in Utuado, a central mountain town.

Fiona's landfall coincides with the 5-year mark since Hurricane Maria, a devastating Category 4 storm that destroyed the island's power grid and left nearly 3,000 people dead. Infrastructure remains weak and many homes still have blue tarps as a roof, which made the impacts from Fiona all the more devastating.

“I think all of us Puerto Ricans who lived through Maria have that post-traumatic stress of, ‘What is going to happen, how long is it going to last and what needs might we face?’” Danny Hernández, a resident of Mayaguez, Puerto Rico, told the AP.

According to the United States Geologic Survey (USGS), the Rio Guanajibo River near Hormigueros, in southwestern Puerto Rico, crested at 29.2 feet Monday morning, exceeding its previous record mark of 28.6 feet set during Hurricane Maria in 2017.

On Sunday, the Rio Grande De Manati River near Ciales, situated in north-central Puerto Rico, rose over 15 feet in just three hours, and as much as 1.26 feet in three minutes.

"That would equate to a water level rise of an inch every 12 seconds and would have been fast enough for people to witness the floodwaters surging," AccuWeather Senior Weather Editor and meteorologist Jesse Ferrell said, adding that this underscores the dangers of flash flooding and explains how there would not have been enough time to evacuate once the storm struck for people who did not flee ahead of time. 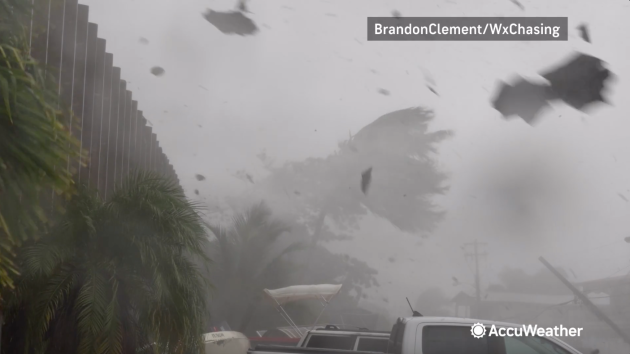 Debris was falling from the sky as intense wind from hurricane Fiona howled across Puerto Rico on Sept. 18, 2022. (Brandon Clement/WxChasing)

Prior to Fiona's landfall, residents were urged to remain indoors. Public beaches, casinos, theaters and museums were all closed, and shelters were opened. Pierluisi stated that $550 million in emergency funds were available for the storm's aftermath, and enough food has been made available to feed 200,000 people three times a day for 20 days.

“Jill and I are keeping the people of Puerto Rico in our prayers as Hurricane Fiona passes over your beautiful island. We are here for you, and we will get through this together,” President Joe Biden wrote on Twitter.

Biden declared a state of emergency in the U.S. territory on Sunday morning as the eye of Fiona approached Puerto Rico’s southwest corner. The action authorizes the Federal Emergency Management Agency (FEMA) to coordinate disaster relief efforts on the island.

Deanne Criswell, the administrator of the Federal Emergency Management Agency (FEMA), will travel to Puerto Rico on Tuesday to meet with Governor Pierluisi and assess damages caused by Fiona.

According to a report from Reuters, Fiona was blamed for at least one fatality in the French Caribbean archipelago of Guadeloupe, which is a part of the Leeward Islands. Video footage that surfaced on social media Saturday showed raging floodwaters in city streets there as Fiona pulled away.

Roughly 12 hours after Hurricane Fiona made landfall in Puerto Rico, it went on to make a second landfall in the Dominican Republic. The storm maintained its Category 1 status, and even managed to strengthen slightly, with maximum sustained winds of 90 mph as it struck around 3:30 a.m. local time near Boca de Yuma, about 20 miles southwest of Punta Cana.

Flooding was reported in numerous areas, including Higuey, a city about 17 miles north of where Fiona made landfall. Videos on social media show a glimpse of the damage that Higuey experienced. People could be seen wading through waist-deep, debris-filled water.

Roadways that weren't flooded in Higuey were littered with downed power lines and tree limbs.

According to AccuWeather forecasters, Fiona will continue to bring more life-threatening flooding, mudslides and damaging wind gusts to the Dominican Republic before moving away from the Caribbean.

Red filaments of light captured over thunderstorms in Europe