With Arthur and Bertha having already come and gone, Bernie Rayno takes a look at where the next named tropical system could develop.

An already active Atlantic hurricane season -- which hasn't officially begun yet -- could take a turn for the record books with a new disturbance that looks poised to strengthen. The season officially begins on June 1.

Forecasters are now monitoring an area of low pressure designated as Invest 92L, which was continuing to slowly develop Saturday morning, about 450 miles southeast of Bermuda, and they say it could strengthen further in the coming days. If this system becomes a named storm, it would be the earliest 3rd named storm on record. 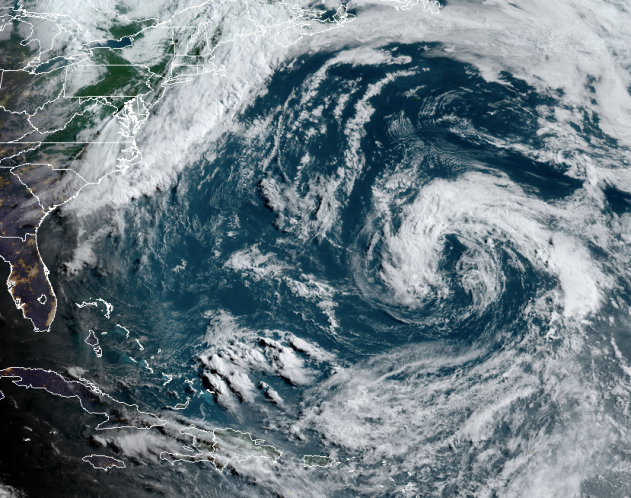 A large swirl of clouds is seen well off of the eastern coast of the US as the sun rises Saturday morning. This marks an area of low pressure that could become the 3rd named storm in the Atlantic this year. (NOAA/GOES-16)

The busy start to the year kicked off with the formation of Tropical Storm Arthur on May 16, and the system narrowly missed the Outer Banks of North Carolina. That was followed by the rapid development of Tropical Storm Bertha less than two weeks later on May 27. Bertha made an unusually early landfall in the United States near Charleston, South Carolina, on Wednesday.

AccuWeather meteorologists have been warning that the 2020 Atlantic hurricane season could be a very active one, and so far it's playing out that way. There have been only five years where two storms have been named in the Atlantic during May or earlier, including 2016, 2012, 1951, 1908 and 1887.

When a pocket of cold air in the atmosphere sits over warm water, the two elements can lead to the formation of a low-pressure system closer to the ocean surface. That process appeared to be underway Friday and may form a tropical or subtropical system in the next 24-36 hours. 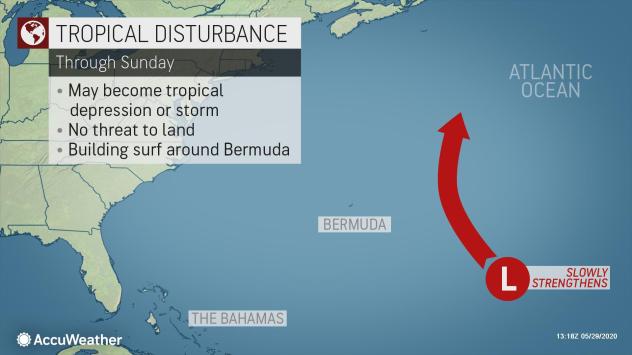 This area of disturbed weather has already been designated as an invest area, meaning that the National Hurricane Center (NHC) is interested in collecting extra information or investigating the area in question. Any information the NHC gathers provides forecasters more data with which to determine the possibility of development.

As of Saturday morning, the system had begun to show signs of strengthening, marked by a more pronounced swirl of clouds, but was still had struggling to develop quickly due to wind shear, or changing wind speeds or directions at high altitude. If the disturbance continues to become better organized, it may become less susceptible to the effects of wind shear.

Typically, tropical systems develop and strengthen most efficiently when they are over water temperatures of 80 F or higher. Invest 92L was moving over an area where ocean water temperatures were ranging between 75 and 77 on Friday morning, but very warm water was located just to the south. However, if the disturbance is to strengthen enough to be given a name, it would need to develop quickly, as it will move northward over cooler waters this weekend.

Whether or not people obey hurricane evacuation orders in 2020 boils down to these 3 things
AccuWeather increases number of hurricanes predicted for very active 2020 Atlantic season
Virtual graduation, proms, and senior trips. How to celebrate your high school senior during coronavirus pandemic

Regardless of development, the system should stay at least 300 miles east of Bermuda. Therefore, any potential storm that develops should bring little impact to Bermuda other than generating slightly elevated seas and rough surf.

Even though preseason tropical storm formation is not uncommon, the development of three named storms before June 1 has never happened in the Atlantic Basin.

Prior to the satellite era, there were likely a number of tropical systems that went undetected over the world's oceans, including the Atlantic from the 1960s on back.

"In 1951, a tropical storm formed in January, then a hurricane followed in May and another tropical system, a depression also formed that same May," according to AccuWeather Senior Meteorologist Alex Sosnowski.

But officially, if this area strengthens into a named tropical system, it would be the earliest third tropical storm on record in the Atlantic. And it would be given the name Cristobal, which is next on the predetermined 2020 Atlantic name list.

The same list of names is used every six years, unless a storm is unusually strong or deadly. The name Cristobal was most recently used in 2014. That year, Cristobal did not form until late August.

Another hotspot for tropical activity may emerge in the Atlantic, but forecasters say conditions could take longer to come together in this zone. An area of low pressure could form in the southwestern Gulf of Mexico or northwestern Caribbean Sea sometime next week. The developing low-pressure area could strengthen into a more organized tropical system as early as next weekend, but AccuWeather forecasters say that sort of development is more likely to happen during the second week of June. Historically, storms that develop in this region of the Atlantic basin are most likely to impact the U.S. directly at this time of the year.