Ian is now a Category 2 hurricane

Ian is expected to strengthen further and can become a major hurricane (Category 3 or greater on the Saffir-Simpson Hurricane Wind Scale) around the time it reaches western Cuba tonight. As a result, widespread and damaging wind gusts are expected in western Cuba, along with flooding rainfall and a dangerous storm surge.

As Ian tracks northward across the eastern Gulf of Mexico, bands of heavy rain and strong winds will sweep across South and central Florida into the middle of the week. An eventual landfall is expected in northwestern Florida later in the week when damaging winds gusts and flooding rainfall are expected. A several-foot storm surge is expected along most of western Florida, but can be as high a 6-10 feet in susceptible areas.

Elsewhere, an area of low pressure in the central Atlantic can develop into a tropical depression later this week, though it should not impact land. 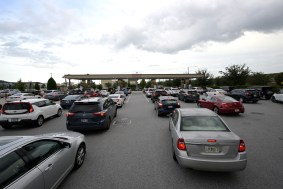 Latest hurricane danger could plot an ‘unusual track’ toward...