2019's Atlantic hurricane season was a busy one and AccuWeather's forecasters are anticipating another active season for 2020.

About two months from now, the 2020 Atlantic hurricane season will officially begin, but AccuWeather meteorologists have already been hard at work examining the factors that could influence tropical activity this year. Forecasters are anticipating another busy year for the Atlantic Basin in 2020, on the heels of an active 2019 season.

Led by Dan Kottlowksi, AccuWeather's top hurricane expert, meteorologists this week released a 2020 Atlantic hurricane forecast. Kottlowksi's team is calling for 14-18 tropical storms during this upcoming season, which runs from June 1 through Nov. 30. Of those storms, seven to nine are forecast to become hurricanes, and two to four are predicted to strengthen into major hurricanes.

“It’s going to be an above-normal season,” Kottlowski said. “On a normal year, we have around 12 storms, six hurricanes and roughly three major hurricanes.”

The 2019 season marked the fourth consecutive year of above-average activity in the basin and was tied with 1969 for the fourth most-active hurricane season on record.

Featuring hurricanes Dorian, Lorenzo and Humberto as well as Tropical Storm Imelda, the 2019 season resulted in 18 storms overall and caused more than $11 billion in damage.

And there’s reason to believe the 2020 season could be every bit as active.

As part of the method for formulating this season’s predictions, forecasters have drawn comparisons to previous years with comparable weather conditions -- also known as analog years. 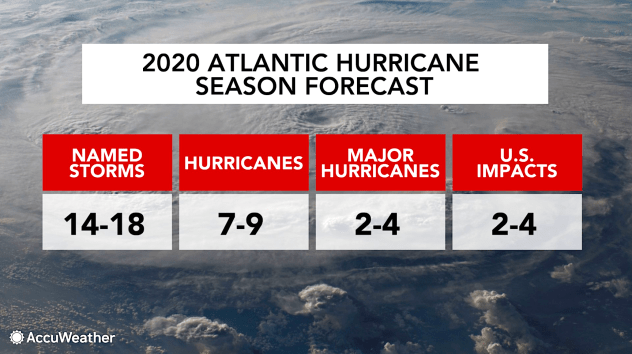 This year, AccuWeather meteorologists have looked closely at the years 1980 and 2005.

In 1980, Hurricane Allen developed into a Category 5 storm and wreaked havoc on Haiti before striking lower Texas. More than 200 people were killed.

Meanwhile, 2005 was a particularly “hyperactive year," Kottlowski said, that resulted in a whopping 28 storms. There were so many storms in 2005 that the predetermined list of names for the season, set by the World Meteorological Organization, was surpassed and the last few storms took on Greek letters as names.

Katrina notoriously exploded into a monster Category 5 hurricane over the Gulf of Mexico before decimating portions of the Gulf Coast of the United States, killing 1,800 people and turning some neighborhoods like New Orleans’ Lower Ninth Ward into ghost towns that still haven’t been fully restored and repopulated 15 years later.

Rita and Wilma were also among the ranks of the strongest storms of the 2005 season — and history. Rita became the third Category 5 hurricane of the season and slammed the Florida Keys to Louisiana and southeastern Texas just weeks after Katrina’s rampage. Wilma intensified rapidly to a Category 5 storm with 185-mph winds in Rita’s footsteps and holds the record for the lowest central pressure in an Atlantic hurricane 26.05 inches of mercury (882 mb).

“There are a number of analog years we looked at that certainly show high-impact storms affecting the United States,” Kottlowski explained.

This year, forecasters predict two to four impacts are in the cards for the country.

“These could be direct hits or a storm scraping the coast but still causing impacts,” he said.

Early in the season, meteorologists will keep a watchful eye on parts of the Caribbean Sea and areas east of the Bahamas, where the water is already very warm. Water temperatures in the Caribbean have already hit 80 degrees Fahrenheit in late March, according to data from a NOAA station.

“Warm water is actually what drives a lot of seasons,” Kottlowski said. “So those will be areas to keep an eye on for early-season development.”

Although hurricane season is still a few months away, he urged residents living on or near the coast to make their hurricane plans now.

“Forecasts will give you an idea of how active it might be, but all it takes is one storm to make landfall in your area to cause serious and life-threatening problems,” Kottlowski said.

“Go back to last year with Dorian and Imelda," he added. "Those were two very, very high-impact storms,” he said. “This year, more than likely, we’ll get hit with one or two big storms and we don’t know specifically where that is, so if you live near a coast or on an island, have a hurricane plan in place.”

Kottlowski has worked as a meteorologist at AccuWeather for 43 years and has been predicting hurricane behavior throughout his career at the company. Graduate courses on tropical weather during his studies at Purdue University piqued his deep interest in hurricane forecasting, he said. 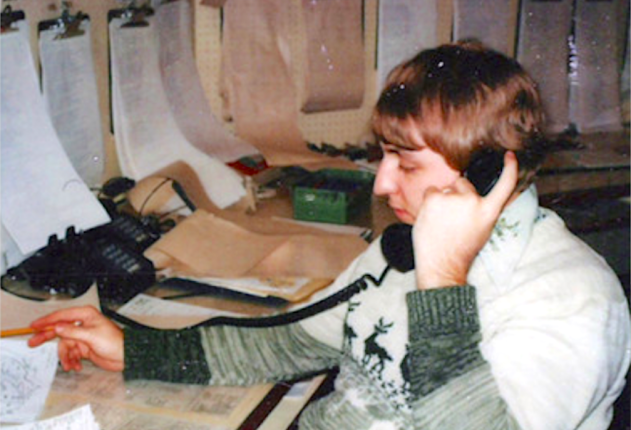 AccuWeather Senior Meteorologist Dan Kottlowski has been forecasting weather for 43 years and is seen here giving a weather briefing in 1982. He is AccuWeather's chief hurricane expert.

Kottlowski and a team of long-range meteorologists predicted last April that there would be 12 to 14 named storms in the 2019 Atlantic hurricane season, including tropical storms and hurricanes. His team's annual forecast also called for five to seven hurricanes, and six materialized.

Kottlowski's team predicted two to four of those storms would become major hurricanes -- and three of them did just that. The 2019 forecast also called for two to four named storms to make landfall, and four of the storms came ashore on the U.S. coast.

For many, particularly now that the coronavirus pandemic is disrupting life in unprecedented ways, hurricane season may seem to arrive in no time. Some of the names that early storms to develop this year will be given are Arthur, Bertha, Cristobal and Dolly. For the complete list of 2020 Atlantic Basin names and all related tropical weather information, visit the AccuWeather Hurricane Center.

‘Category Hell:’ 6 months after Dorian, where do things stand?
Behind the scenes of hurricane forecasting preparations, problems and ‘success’
Woman’s American Dream rises from the ruins of Hurricane Michael’s wrath