Let’s take a excursion to Lake Erie in northwestern Pennsylvania and see an interesting feature along the lake – cliffs that keep eroding and causing trees to hang on for dear life!

When they can’t hold on any longer as the sandy soil around them erodes, they fall into the lake – leading to what looks like a “tree graveyard” along the lakeshore. Check it out:

Sandy soil doesn’t hold together as well as dirt. Because of that, each time rain pours down, some of the sandy soil of the cliffs (known as bluffs) along Lake Erie is swept down into the lake – that’s called erosion.

You may already know about erosion without realizing it – why don’t you build a sandcastle right up against the water? The waves will wash it away, right? That’s a small example of erosion! 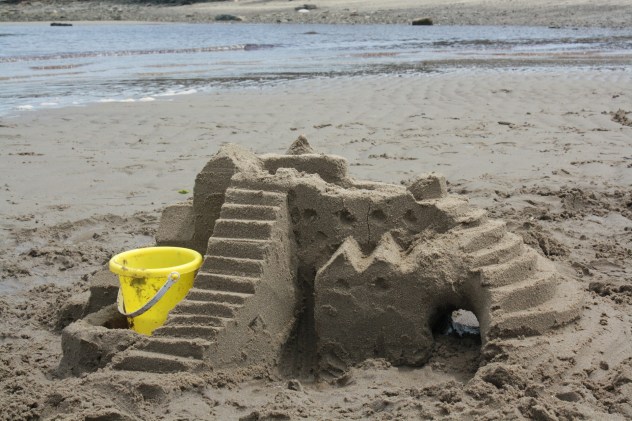 When your community is under a tornado warning, you rush to your basement (or lowest-level of your home) to stay safe. However, in the basement of AccuWeather Senior Meteorologist Bob Smerbeck is a tornado machine that he built!

This isn’t a simple tornado that you can spin up with a soda bottle (though, that’s a fun at-home activity!). Bob spent three months making this machine – using a hair dryer, pipes, fan and a vaporizer – to look at how tornadoes form.

Thunder rumbling and lightning flashing through the sky are common in the summer, but what makes a thunderstorm severe and causes your AccuWeather app to buzz with severe thunderstorm warnings? Let’s find out:

If you are a regular camper of AccuWeather Summer Camp, you know that when you hear thunder, you need to head indoors.

OK, there aren’t really the types of shelves you may think of in the sky, but shelf clouds do exist and can be scary looking – so scary that some people may quickly think an alien ship is invading their community when they first see a shelf cloud! Let’s find out how these clouds take shape in the sky:

As Krissy said in the video above, shelf clouds form as strong winds rush colder air down and outward from a thunderstorm. If those winds are strong enough, they can knock down trees, power lines and even cause some damage to parts of your house.

You should already be indoors when you hear thunder to avoid being struck by lightning, but shelf clouds are another good reminder from the sky that you shouldn’t be outdoors during a thunderstorm. 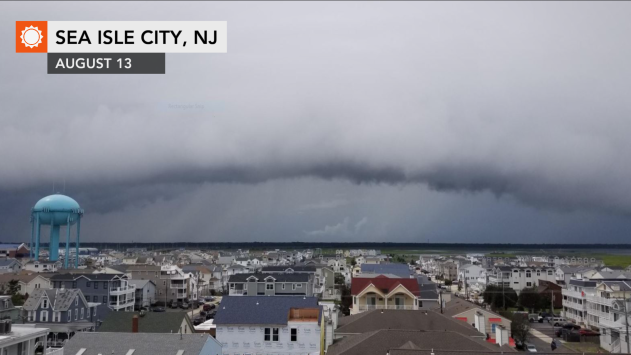 You and your furry pets may enjoy sitting out in the sun and soaking up the warmth. Snakes and other reptiles also like to sit out in the sun, but it is for a more important reason – without that warmth, they wouldn’t be able to move around.

Humans, dogs, cats and our other furry friends are warm-blooded, meaning our bodies do the work to keep our temperature in check. Snakes, other reptiles, insects and fish are cold-blooded – if they don’t find ways to warm or cool themselves, their body temperatures would be the same as the air around them.

Not being able to maintain a steady temperature is why the life of most snakes and reptiles is slow-moving, according to the U.S. Fish and Wildlife Service. They can have quick bursts of energy but would never be able to run a marathon away from a predator or to catch its dinner.

The lower the temperature goes, the more sluggish reptiles get. This past winter, it was so chilly in Florida that iguanas were falling out of trees!

You all know that when thunder roars, head indoors. Well, here is one rumble of thunder you don’t have to be scared of – one that you make at home!

As AccuWeather Senior Meteorologist Jason Nicholls shows below, all you need is a few common items from around your house for this fun weather activity:

🗺️ August 12 - Map Station: Chicago isn’t the Windy City for the reason you may think

Speaking of gusty winds, we have another hair dryer activity to understand why a stretch of rainy weather makes it easier for winds to knock down trees than when it’s been dry:

🔎 August 12 - Weather Detectives! Why so windy near the lake and ocean?

We recently learned why clouds tend to bubble up more over the land than the water during the spring and summer, but now let’s think about wind. Why is it usually windier when you are near a lake or ocean than farther inland? Grab a hair dryer and let’s explore more:

Do you see red bird feeders around your neighborhood? There’s no seed in these feeders, but a clear liquid. One tiny bird that beats its wings about 53 times a second and can travel across the Gulf of Mexico without stopping drinks from these feeders. Let’s learn more about the fascinating Ruby-throated Hummingbird:

Did you know that the hummingbird seen in the video above can’t walk or hop? The Cornell University Bird Lab says that its legs are too short!

The Ruby-throated Hummingbird is the only hummingbird east of the Rocky Mountains in the United States, but there are other types of hummingbirds across the world. 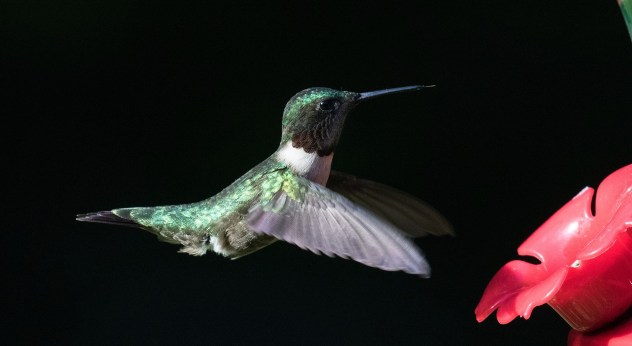 Here’s a neat trick for you to show your friends – put a few coins in a balloon, blow it up and give the balloon a shake. The cool part happens after you stop shaking the balloon and watch as the coins keep going around and around inside! Check it out:

As cool as this trick from AccuWeather Senior Meteorologist Jason Nicholls is, there is a science lesson behind it! You saw centrifugal force and inertia in action.

Inertia states that all objects and matter in the whole universe will continue moving in the same direction and speed unless there is another force trying to slow or stop them or change their direction. Centrifugal force is an apparent force that acts outward on an object moving around a center, arising from that object’s inertia.

So the shake you gave to the balloon kicked off the inertia of the coins and the centrifugal force kept them spinning around the balloon, when gravity may have gotten in the way otherwise.

Have you ever dressed up as Belle from Beauty and the Beast? Belle was so pretty and, even better, she was so nice to everyone in the castle and fell in love with the beast.

However, there is one Belle in history some people would like to forget – that is Hurricane Belle that struck the northeastern United States in August 1976. Let’s gather around the campfire and hear more of this damaging and deadly storm from the AccuWeather This Date in Weather History podcast:

Interestingly, there hasn’t been a Hurricane Belle since 1976, but the name wasn’t retired. When Belle slammed into the U.S., only female names were used for tropical storms and hurricanes in the Atlantic Ocean. That changed in 1979 when male names were introduced, causing Belle to be dropped from the list.

Have you ever noticed how on some days in the spring and summer, clouds and storms will bubble up just inland from the beach and the sky over the water stays sunny? Find out what happens over land (and an activity to understand that more) that allows what is like a force field for the beach against clouds and storms.

One thing to remember is that even if you aren’t getting rained on at the beach but a thunderstorm is nearby, you could be close enough to be struck by lightning – and the crashing of the ocean waves makes it even more important for you to keep an eye to the sky and your AccuWeather app.

What scares you the most during a thunderstorm – loud claps of thunder? That’s scary and makes you want to hide under the covers. However, it’s the lightning that we all need to run indoors from! Worse than causing those loud booms of thunder, lightning can kill and hurt people and animals. 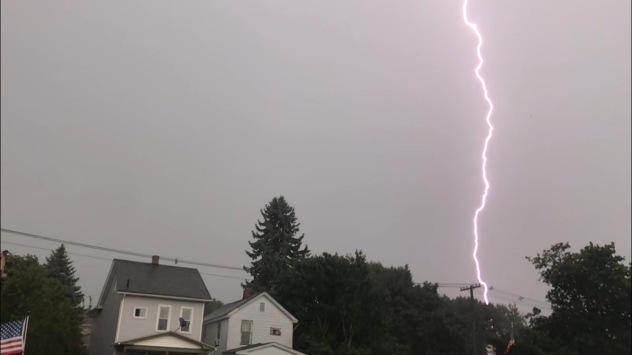 Severe weather rolled through swaths of Pennsylvania in August 2019, downing several trees and power lines across the state. (AccuWeather/Brian Lada)

Did you know that only about 10 percent of the people struck by lightning are killed? Our friends at the National Weather Service say that’s true, and it means that 90 percent of people who are struck survive but some can get hurt really badly.

If you see a person get struck by lightning, would you be worried of getting shocked if you touch that person? Don’t be – you won’t get electrocuted! Let’s find out more and what you can do to help save that person’s life:

⚡ August 10 - Shocking Truth: 5 ways you can be struck by lightning

When you hear of someone being struck by lightning, a scary image of a bolt directly hitting them may come to mind. These direct lightning strikes can be the most deadly, but there are four other more common ways people are struck:

The above is why you should always take thunderstorms seriously – remember to head indoors as soon as thunder is heard. Stay away from windows and off computers, phones and anything else that is plugged in.

Thunderstorms are a good excuse to delay your kitchen chores as you shouldn’t wash dishes – much like you should wait until a thunderstorm passes to take a shower or bath.

AccuWeather Meteorologist Chris Nallan gets down into the dirt in his garden (with his bare feet!) to give us an update -- let’s see how his veggies are growing and how cloudy days, even without rain, are good for your garden every now and then:

When the sun is shining brightly this time of year, it may feel hot – but did you know that it is already autumn in the Northern Hemisphere? It’s autumn if you are following the solar calendar, which is based on the strength of the sun’s rays.

Most of us follow astronomical seasons. If you check your 2020 calendar, more than likely it will list the first day of autumn as being on September 22 (if you live in the Northern Hemisphere – that day is the start of spring in the Southern Hemisphere). 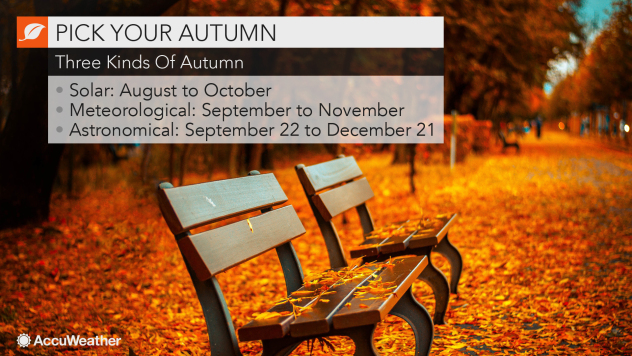 In between the start of solar and astronomical autumn, meteorological autumn starts at the beginning of September. Meteorological seasons are based on average temperatures with summer being the warmest time of the year and winter being the coldest.