It's common advice to stay away from plumbing or metal objects during a thunderstorm, but what could happen if you don't?

Lightning can strike and electricity can travel through pipes and water, shocking you, according to John Jensenius, lightning safety specialist for the National Weather Service (NWS).

During a thunderstorm, simple daily tasks such as doing the dishes or taking a shower can increase your risk of getting struck by lightning. 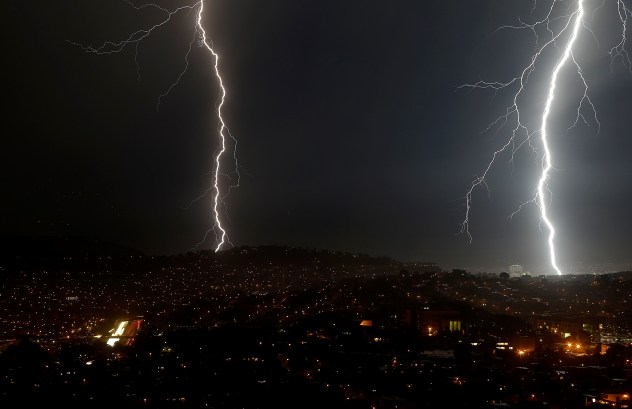 "You just want to stay away from things that conduct electricity within the home," Jensenius said. "That would include both the wires and the plumbing, so in that particular case certainly showers would be dangerous, it would be dangerous to be washing your hands or washing dishes. Just avoid those any time you can hear thunder."

"If you're at all connected to ... anything that plugs into the wall, which could be, for example, a dishwasher or a washing machine that's plugged into the wall or also has connections to plumbing, that becomes dangerous," Jensenius said.

He said that lightning can strike up to about 10 miles away from a thunderstorm. With that in mind, if you can hear thunder, you're within striking distance of a storm and you'll want to get to a safe place.

According to the NWS, a safe place is indoors, away from metal, plumbing, anything plugged in, concrete, windows and doors. Picnic shelters, dugouts and dog houses are not safe. A vehicle with a metal roof is safe if the windows are up.

Jensenius said some people think if they have plastic pipes, they're able to shower during a storm without risk.

"That's not true. Water can conduct electricity as well. We see that on the outside where lightning strikes something and if there are puddles around, it can easily electrocute somebody nearby the puddle."

AccuWeather Senior Meteorologist Dan Kottlowski notes it can also depend on how your house is grounded.

"When a house is built, it should be built so that when your electricity comes in, it's grounded to your house. If your house is grounded to separate rods that are basically stuck down into the ground, then that's a bit safer because nothing is attached to the plumbing," Kottlowski said.

Kottlowski said some homes, years ago, had electrical systems that were grounded to the plumbing system.

In order to determine if your electrical system is grounded to your plumbing, it's best to contact an electrician, Kottlowski said.