What's the difference between meteorological and astronomical spring?

People know about the changing seasons based on Earth’s orbit around the sun, the astronomical season. There’s another type of season used by meteorologists known as the meteorological season.

The month of March often offers widely varying temperatures across the United States. One day, there might be record-breaking warmth; the next, a storm or a blizzard could strike. Meteorologists consider this fluctuation a part of meteorological spring, which begins March 1.

The spring season associated with the vernal equinox, called astronomical spring, occurs on or around March 20 in the Northern Hemisphere, but meteorologists recognize March 1 as the first day of meteorological spring, which is based on annual temperature cycles and the Gregorian calendar.

“Spring is a transition,” said AccuWeather Senior Meteorologist Dave Samuhel. “As we come out of the cold winter toward the warm summer – it’s all based on the sun angle, which depends on the Earth’s orbit.”

Leap years and the elliptical shape of that orbit around the sun affect when the astronomical seasons, or summer-winter solstices and vernal-autumnal equinoxes, occur.

According to National Centers for Environmental Information (NCEI), the meteorological seasons were created because traditional seasons varied in length from 89 to 93 days and it was difficult for experts to compare statistics from one year to another.

Meteorological spring is considered to encompass the months of March, April and May. The other meteorological seasons each also consist of three consecutive months: 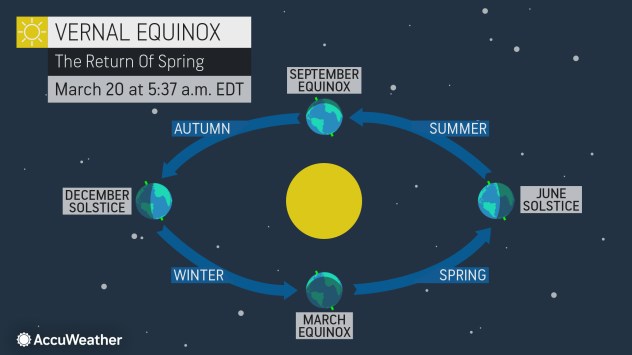 The month of March is associated with a variety of folklore, including the famous proverb, “March comes in like a lion and goes out like a lamb.” It’s one of many proverbs from years gone by that attempt to predict the weather.

Experts say the phrase has some validity when it comes to the possibility of roaring storms at the beginning of March.

“We start to see some warm weather in the southern United States, and it is typically still very cold in Canada and the northern U.S.,” Samuhel said. “Storms will feed off that big temperature difference and get pretty feisty, so that is why it is more common to have big storms during the beginning of March than at the end.”

'Incredibly active' severe season may follow busy end to winter
Get ready for spring with these 19 essentials
What will allergies look like across the US this spring? AccuWeather has the forecast

And there’s a March legend of balancing raw eggs on their ends only on the first day of spring (the vernal equinox) because of the position of the Earth’s axis and a perceived change in gravity. But as tedious as it might be to prop a raw egg on a table and not have it fall – it’s a myth and can be done any day of the year.

“It is not true,” Samuhel said. “You can get lucky and balance an egg anytime. It doesn’t have anything to do with the equinox.”