The bright bolt crashed to the ground mere feet from the camera, striking the pickup truck as it coasted down a Florida highway carrying the woman's husband and children.

A woman recorded lightning striking her husband's truck right in front of her near St. Petersburg, Florida, on July 1. Her husband and their children who were inside were not injured.

During a storm in Tampa, Florida, on July 1, Michaelle May Whalen decided that it would be a cool idea to try to get a video of the lightning as her family caravanned down the highway. Little did she know that the video she took would capture the lightning striking the truck in front of her, a truck that her husband and three children were in.

Whalen and her clan were driving back from a family vacation in Florida when they noticed storm clouds building overhead.

"It started to storm and I thought the lightning was neat, so I was trying to snap a picture of the lightning and missed every time,” Whalen told news aggregator Storyful. “So my son-in-law suggested I slow-motion video record, and that’s when I captured the event on camera.”

The shocking video shows the entire lifespan of the bolt. First, a blinding light envelops the screen, with nothing visible but the searing hot electric energy. Then, as the bright light fades, an orange explosion can be seen hitting her husband's truck, with tiny sparks flying in all directions. 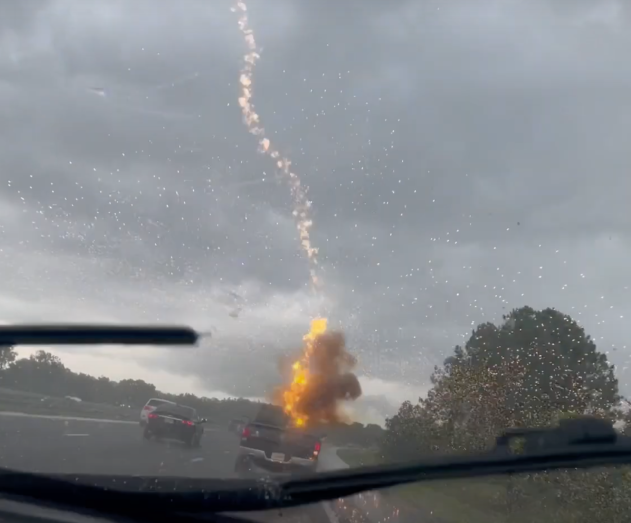 Lightning strikes the back of the pickup truck, sending sparks flying in all directions.

Whalen's car then drives closer to the bolt, which may have actually been a series of four strikes, according to a tweet from Chris Vagasky, a lightning data and safety specialist at the National Lightning Safety Council and employee at Finland-based lightning research firm Vaisala.

"When you look outside and see cloud-to-ground lightning flickering, that entire flickering process is what we call a cloud-to-ground flash and it's made up of multiple cloud-to-ground strokes," Vagasky explained, adding that multiple "lightning strokes" — a term scientists use for the rapid discharge of electrical charge between the cloud and the ground — being part of a single flash is hardly uncommon.

As the series of strokes continues, shooting off repeated claps of thunder that sound almost like a machine gun, the current from the bright white bolt moves closer to Whalen's car, sending off another powerful strobe of white-hot light by the hood of her own car before the plasma from the bolt evaporates into thin air.

According to Vagasky, the last stroke appeared to last longer than the three normal strokes, appearing for tens of milliseconds before fading away compared to the microseconds a typical stroke lasts.

"This is a fascinating video, to see the lightning hit the road, the truck, and then for this vehicle to drive through the dissipating plasma is not something I've seen before," said Jesse Ferrell, a meteorologist and senior weather editor at AccuWeather.

Thankfully, everyone in the truck was uninjured by the lightning strike although Whalen described the unlucky pickup truck as "completely fried."

Lightning strikes are hardly uncommon in Florida, which recently reclaimed its title as the lightning capital of the United States, with 85.99 strikes per square kilometer, the most of any state in 2021.

Earlier this year, a storm chaser hoping to get video of a tornado instead captured the exact moment lightning struck one of his friend's cars, launching sparks into the air before dissipating into a broken current of orange light.

The exact moment the lightning bolt struck the car, which was unable to start again after being hit.

Storm chaser Christopher Riske told Storyful that the person in the car "was fine" after the strike, but that the car was rendered inoperable by the bolt and had to be towed away.

"I have never seen anything like this before; this is an extremely rare occurrence,” Riske said.

Cars offer people protection from the dangerous effects of lightning because their metallic shell acts as a "Faraday Cage" —an enclosed structure used to block electricity — and helps disperse the lightning around an individual and can guide the electricity safely into the ground.

Viral video seemed to show man struck by lightning -- or was he?