What was really going on in this viral video that appeared to show a man being struck by lightning?

The video is unsettling to be sure -- but many people came away with different explanations. Plus, the man in the footage described what he felt.

After nearly being struck by lightning on Aug. 15, 2019, in Conway, South Carolina, Romulus McNeill spoke to AccuWeather about his scary and intense experience.

In a heart-stopping video that made its way around the internet, it appeared that a man came within inches of a lightning-strike catastrophe outside a school in Horry County, South Carolina.

The video, which went viral at the time, shows Romulus McNeill recoil and run after a bolt of lightning flashes frighteningly close to him on a summer day in August 2019. McNeill, 51, is originally from Baltimore and currently lives near Myrtle Beach where he works as a school counselor.

“I felt like something did hit me, something did touch me,” McNeill told Inside Edition about his experience outside the Academy for Technology and Academics.

"There was a big boom and there was a big bright flash and I was just trying to get out of there as fast as I can," McNeill told AccuWeather. "I didn’t know what happened, all I know is that something that was quick and intense and powerful and I just wanted to get to my car."

However, AccuWeather Meteorologist Jesse Ferrell said what was seen in the video was not a direct lightning strike.

“This man was not struck directly by lightning, but was close enough to give him a good scare,” Ferrell said. “Based on the shadows of the trees in the video, I’d say a flag pole, building or tree in the upper right of the photo, off camera, was the object that was struck.”

Ferrell, who said that he has been similarly close to a strike like McNeill on numerous occasions, also added the possibility that McNeill could have been electrocuted from ground currents. A ground current can put people at risk when the electricity from a lightning strike flows through the ground away from the point of the original strike.

Others have suggested that a screenshot of the video portrays a captured moment of an "upward leader." However, Ferrell also added that is extremely rare and unlikely as well.

An upward leader, also known as a streamer, occurs when channels of electricity reach up from the surface to try to make a connection with a bolt of lightning coming down. While this possibility isn’t impossible in McNeill’s situation, Ferrell explains that it is extremely unlikely that the streamer would have been captured on video.

“Video cameras generally have frame rates that are too slow to show upward leaders, which exist for only microseconds before a lightning strike,” Ferrell said. “As far as I know, upward leaders have only been captured on video once, at 9,000 frames per second by Tom Warner of ZT Research.”

For comparison, Ferrell said that a security camera like the one that captured McNeill’s scary encounter, would be around 30 frames per second, at best. 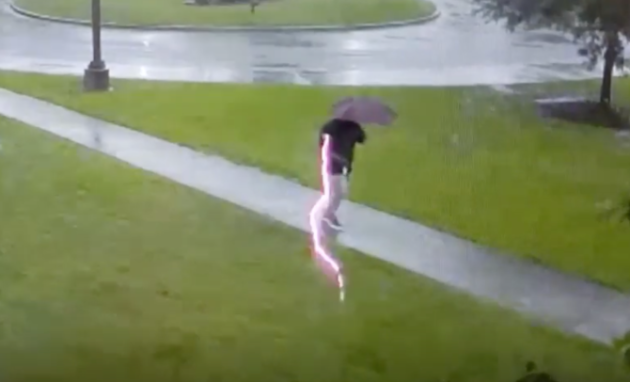 “Upward leaders may have also been captured on one frame of a video by (storm photographer) Dan Robinson, who has been using photography and videography to capture lightning for 30 years,” Ferrell said. “Are we really to believe that this security camera footage is the third example?”

Rather than this being another example of the rare upward leader or a direct strike, Ferrell argues that this is much more likely an instance of “ghosting,” when a reflection from the camera’s lens imprints on the video’s frame.

Robinson explained in a blog post that videotaped lightning strikes commonly "defect" in at least one frame of the image.

Robinson goes on to explain that a ‘ghost channel’ is simply an image of the lightning striking faster than the camera’s shutter can resolve, causing the image of the channel to bleed across the lower section of the frame. 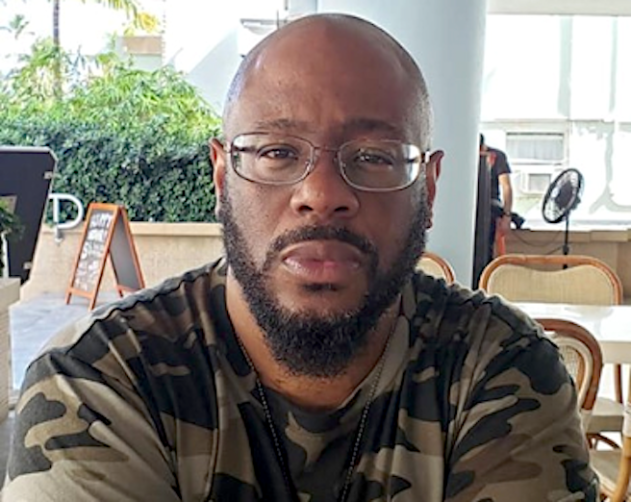 Romulus McNeill, 51, of Myrtle Beach, South Carolina. McNeill was seen having a very close call with a lightning strike in a viral video. "I ended up getting the jolt of my life," McNeill told AccuWeather. (Facebook)

In McNeill’s case, the fact that he was seen in the video picking up his dropped umbrella and jogging inside also indicates the unlikelihood of a direct strike or electrocution.

"When I hear the word thunderstorms, you won’t see me with an umbrella in my hand. Period," McNeill vowed.

No matter the determination, McNeill was right to be frightened and respond with fear to the incident that made him semi-famous.

“I’m always careful about lightning, but what I’m going to be more cautious about now is that when I do see lightning, I’m going to avoid going outside at all costs,” McNeill said to AccuWeather.

“I’m just glad that I’m able to share my story so hopefully it helps other people bring awareness to lightning strikes.”