The 5 US skyscrapers that get struck by lightning most often

Which skyscraper is hit by lightning the most?

Data from VAISALA shows every lightning strike to hit New York City between 2015 and 2020. Surprisingly, it is a skyscraper in another city that has been hit the most in that period of time.

They say that lightning never strikes twice, but meteorologists and photographers know that it does, especially regarding tall buildings.

With lightning strike data compiled by the Finland-based company Vaisala, which tracks global lightning strikes, among other weather data, AccuWeather has discovered which skyscrapers in the United States have been struck the most over the last five years.

The Port Authority of New York & New Jersey blog explains how the lightning arrestor technology, which protects the inside of the building, works. “One WTC is a super-sized Faraday cage that distributes electrical current around the outside of the tower, with none of it passing through the interior space of the building. The current discharges into the bedrock below the tower and dissipates into the earth.” 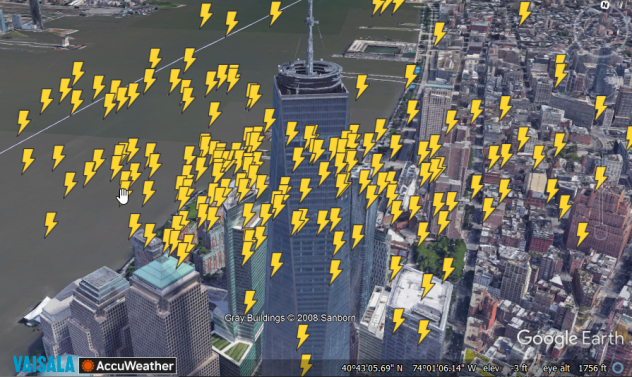 Other tall buildings throughout the country have similar lightning arrestor technology, and it doesn't differ that much from lightning rod systems for homes.

The tallest building in the U.S. certainly stands out when looking at a map of the city. Lightning strikes for 2015-2020 are fairly widely spaced, with the exception of One World Trade Center, the Empire State Building (which was struck about 50 times), and a few tall buildings across the Hudson River in Jersey City, New Jersey, were hit, too. In rare cases, both the Empire State Building and One World Trade have been struck at the same time. 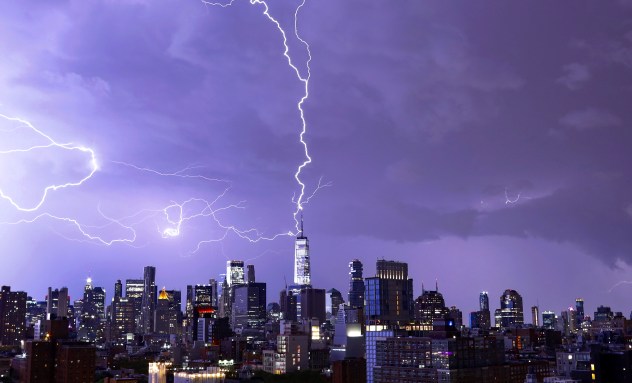 Lightning strikes the spire of One World Trade Center and over the skyline of Manhattan in New York City on Friday, July 24, 2020. Photo by John Angelillo/UPI

Yet the Big Apple isn't the U.S. city with the most frequently struck building. That distinction goes to the Willis Tower in Chicago, which ranks third in the U.S. for height, towering at 1,451 feet above the Windy City. That skyscraper was hit with 250 lightning strikes between 2015 and 2020, making it Thor's favorite target, so to speak.

Why Willis and not World Trade? Lightning strikes vary based on building height, material, and suppression systems. Chris Vagasky, a meteorologist for Vaisala, told AccuWeather that location may be to blame as well. 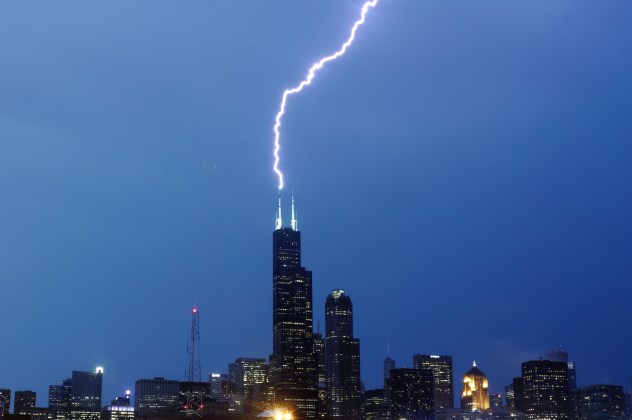 The third building of note was the 1,023-foot-tall Bank of America Plaza in Atlanta, which received 173 lightning strikes within the designated distance used in this analysis (more on that below), although it appears that at least a dozen strikes could be attributed to the nearby AT&T building.

Honorable mentions go out to the JP Morgan Chase Tower in Houston, which was struck 75 times during the period, and the Key Tower in Cleveland, hit 39 times. 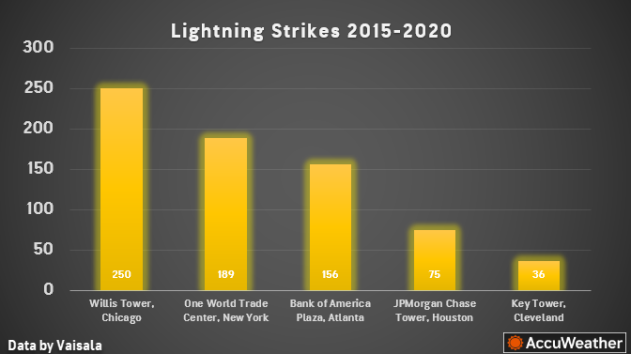 Lightning Events 2015-2020 for the buildings that qualified for the study, from Vaisala data.

The methodology for finding the tallest buildings involved culling a list of the top 50 tallest skyscrapers in the country down to the tallest in each state. That left 10 skyscrapers, which AccuWeather compared against each other for the period covering 2015-2020. A longer period could not be used because some of the towers (most notably One World Trade) weren’t completed before 2015. The 2021 data was not used since the full calendar year has not been completed and therefore could be influenced by a seasonality bias.

Severe Weather Top 5 US airports at risk for lightning strikes

There are a few reasons some other notable American skyscrapers didn't make the list.

Comcast Technology Center, the tallest building in Philadelphia, was disqualified, as it wasn't finished until 2018. Even still, it did not appear to have a yearly average that would have ranked it anywhere close to the top of the list. 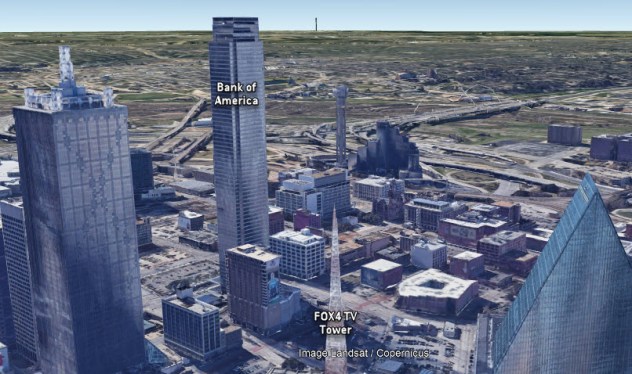 Downtown Dallas, Texas, showing the Bank of America building and the much shorter FOX-4 television tower.

The Bank of America building in Dallas was disqualified because of a bit of an oddity. The much-shorter FOX4 TV antenna tower, also located in downtown Dallas "stole the thunder" from the tallest building -- more strikes hit the antenna than the Bank of America skyscraper.

The study also found that none of the three tallest qualifying buildings on the West Coast had been struck by lightning during that period. That list included Wilshire Grand Center in Los Angeles, the Salesforce Tower in San Francisco and the Columbia Center in Seattle.