Since the solar system is so big, you may have a hard time picturing how far apart the planets are from each other and the sun. Well, here is a fun activity to help with that – let’s get out our art supplies and make a solar system in our yards!

All you need for this activity is construction paper, tape, sticks to put your planets in the ground and a tape measure.

Cut out circles for the sun and planets (and feel free to decorate them with how the planets may actually look – don’t forget the Giant Red Spot on Jupiter!), and tape the circles to your sticks. Pick a part of your yard that is 100 feet (30 meters) long – remember the solar system is big! – and place your sun as the starting spot. From that point, measure out the following distance for where to put each planet in the ground:

Did you have to put Neptune into your neighbor’s yard? Neptune is more than 30 times as far from the sun as Earth is – and it takes 165 Earth years for Neptune to take one journey around the sun!

Thanks to Education.com for the idea of this fun activity, and NASA for stats on the planets.

Did you have fun looking for Comet NEOWISE over the past couple of weeks? If you saw the comet, you may have also seen the Big Dipper. Many people were using this well-known constellation to guide them to where the comet was in the sky.

If you are new to stargazing and live in the Northern Hemisphere, look to the northwest to see the Big Dipper in the evening. The constellation, which is also called Ursa Major, will shift to the northern part of the sky if you wake up early. 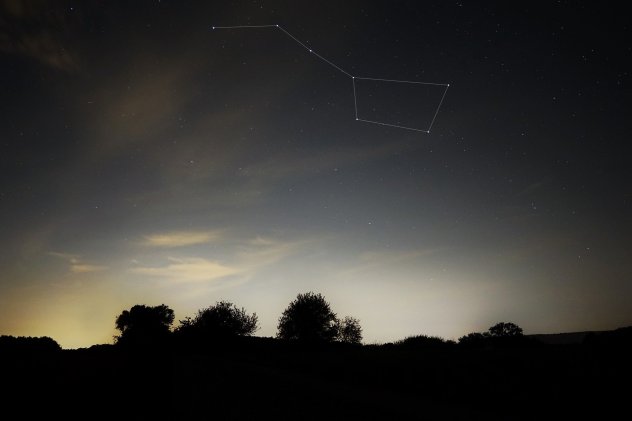 Tornadoes are not confined to Tornado Alley in the United States – they’ve happened on every continent around the world except Antarctica. In fact, July 24 marks the anniversary of Europe’s strongest-ever tornado. This happened way back in 1930 in northeastern Italy.

Let’s gather around the campfire and listen to AccuWeather’s This Date in Weather History podcast to learn more about this monster tornado that wiped whole villages off the map:

Tornadoes can be scary, and you should seek shelter as soon as your AccuWeather app says a tornado warning has been issued for your area. However, here’s a tornado you don’t have to run from – one that you can make at home: 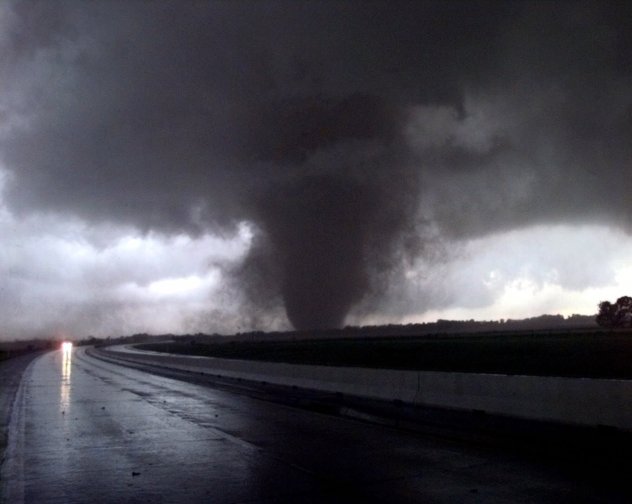 The tornado that tore through northeastern Italy on July 24, 1930, maxed out on the Fujita scale at an F5 rating – the same as the tornado seen in the above photo in central Oklahoma on May 3, 1999. (AP Photo/J. Pat Carter)

We aren’t talking about when you drop food on the ground – the five-second rule for thunderstorms will tell you how far away a bolt of lightning is:

Regardless of how far away the lightning is, remember that as soon as you hear thunder, you are close enough to be struck by lightning. Lightning often strikes more than three miles from the center of a thunderstorm, according to our friends at the National Weather Service, often when it’s not even raining! 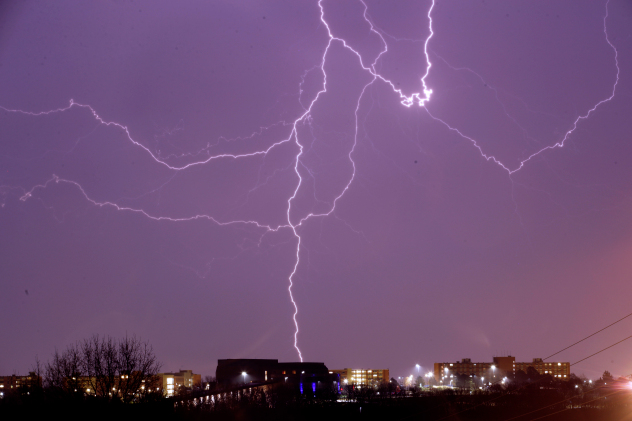 Lightning is seen in the sky over the University of Kansas in Lawrence, Kansas, on Thursday, March 26, 2020. (AP Photo/Orlin Wagner)

It’s time for our weekly check-in with AccuWeather Meteorologist Chris Nallan to see how his garden is doing – it’s definitely tomato and cucumber city!

Speaking of cucumbers, did you know that the cucumber peels can help you keep bees away from your picnic or other summer event? While we would rather not invite bees over for a picnic, they are very important to our food supply and you can help make sure they keep buzzing around our gardens.

🎨 July 23 - Art Station: Was it magic? Check out this cool bead trick

If you pull a string of beads out of a cup, gravity should just push the beads down to the ground – right? Watch this neat trick by AccuWeather Senior Meteorologist Jason Nicholls; you’ll see the beads rise up in the air – how did that happen?

It was science and not Jason’s magic hat that caused the beads to rise up in the air.

First of all, let’s learn about inertia – that states that all objects and matter in the whole universe will either stay still or will continue moving in the same direction and at the same speed unless there is another force trying to slow or stop them or change their direction.

🔎 July 22 - Weather Detectives! : Sleet or hail? How you can tell the difference

Have you ever heard someone say that it is hailing in the winter or that a summertime thunderstorm is dropping sleet? Hail and sleet may look alike, but they are about the same as apples and oranges:

Even if you don’t remember how sleet and hail form, just think of the time of year when trying to figure out which one is which. Sleet is more common in the winter, while hail is usually seen during the warmer months as thunderstorms rumble.

What makes it really confusing to tell the difference is when so much hail falls that snow plows are needed to clear streets!

We take a break from our field trip to winter to warm up by watching AccuWeather Senior Meteorologist Jason Nicholls use chemistry to create instant fire:

Since we do not want you to attempt this experiment, Jason is keeping the instructions a secret like your grandma’s famous recipe. Don’t forget to check out the many other experiments from Jason that you can definitely try at home to have fun learning about the weather!

Are you sick of the summer heat or just wishing for winter to make snowmen? Cool down as we explore winter weather – starting with freezing rain.

Freezing rain is just that – rain that freezes on the ground. Do you ever wonder why if it’s cold enough for ice, it doesn’t just snow so we can all go outside and play? Let’s learn how to make freezing rain at home as we find out the answer:

Freezing rain can create pretty photos – check out these “Ghost Apples” – but can be extremely dangerous, even worse than snow and sleet:

Look at the satellite image below, what do you see? 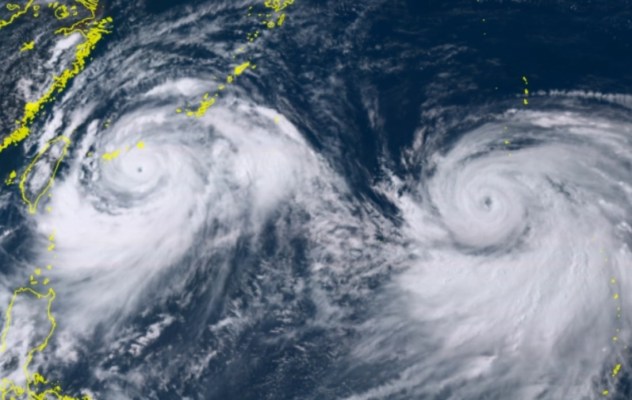 If you said “hurricane,” you passed this pop-quiz. If you asked, “What part of the world was this satellite image taken,” you get a gold star!

For those who live near the Atlantic or eastern Pacific oceans, you have definitely heard of hurricanes. What about typhoons or tropical cyclones? They are all the same except for one small (but important) detail:

Back to our first question – those were two typhoons, Lekima and Krosa, in the northwestern Pacific Ocean in August 2019 seen on the Himawari 8 satellite (thanks to the Japan Meteorological Agency for this image!).

🔎 July 21 - Weather Detectives! What makes a hurricane so powerful?

We learned earlier that dust is the kryptonite of hurricanes, but how can hurricanes that elude Saharan dust become so strong to kill people and demolish homes? The answer is in the warmth stored up in the ocean:

Just like your car won’t run if you don’t put gas in it, warm water is the fuel for hurricanes. If the ocean water temperature isn’t at least 80 degrees Fahrenheit (26.7 degrees Celsius), a hurricane will struggle to form.

Speaking of the ocean, when do you think the ocean water is at its warmest? Do you think it is between June and August when many in the United States are taking summer vacations? It’s actually later than that because the ocean is in no hurry to warm up.

You may have heard of talk of cloud seeding to lessen the severity of hurricanes, but there is something that is a natural kryptonite to hurricanes – dust from the Sahara Desert in Africa:

While hurricanes make the news because of the destruction they can cause, there is a reason they form – they help to spread warmth from the tropics to other parts of the world. 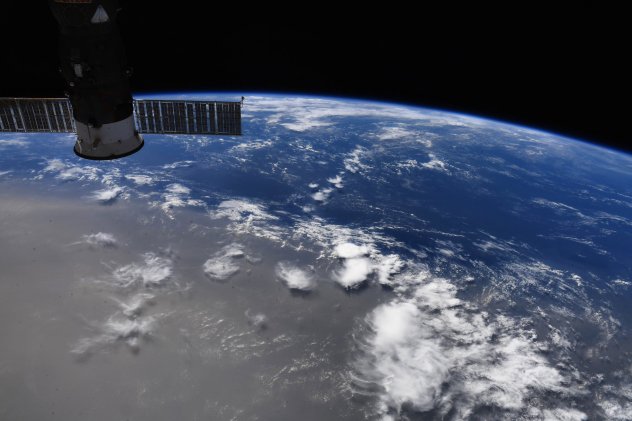 A view of the Saharan Air Layer over the Atlantic Ocean from the International Space Station on June 21, 2020. (Twitter/@Astro_Doug)

There is a big temperature difference between the equator and the North Pole, so hurricanes do their part to make things more equal. The problem is that as hurricanes are moving heat around the world, they can produce really bad flooding and powerful winds.

🔥 July 20 - Campfire Tales: Why does summer heat lag behind the sun's strongest rays?

The first day of summer is usually around June 21 in the Northern Hemisphere, and that’s when  the strongest rays of the sun are shining down on places outside of the tropics. Wait a minute. We learned earlier that the Dog Days of Summer run from July 3 to August 11 -- shouldn’t the peak of summer’s heat line up with when the sun is the strongest? Not at all, actually -- here’s why:

If there is a heat wave during the Dog Days of Summer or even before or after these days, you have to remember to beat the heat by drinking plenty of water, wearing light-colored and loose-fitting clothing and push any play time until the evening hours when it is more comfortable.

What better way to celebrate the Dog Days of Summer than watching a funny dog video. Ringo, the Border Collie mix, couldn’t contain his excitement when his family pulled up next to a lake. Check out how fast he runs out of the car and dives in for a swim!

If you thought that was funny, what would you think if you saw a chicken swimming in the ocean? Sammi, the chicken, loves the ocean in Florida!

🦒 July 20 - Petting Zoo: Dog Days of Summer have nothing to do with dogs 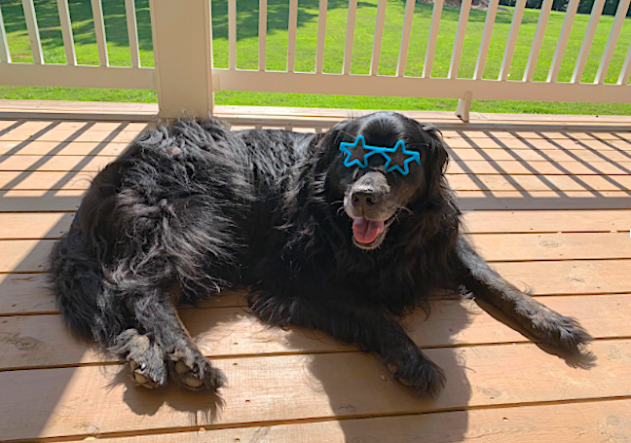 Have you ever heard about the Dog Days of Summer? Is it the time of summer where dogs get to party -- running into sprinklers, jumping into ponds and eating ice cream? Our doggie friends probably wish that!

The hottest days of the summer are typically called the Dog Days of Summer, but the reason has nothing to do with dogs -- instead, a star in the sky is how these days got their name. Let’s find out more:

Remember: Animals can get really sick if they get too hot, like us, and some have come up with interesting ways to keep cool -- elephants give themselves a mud bath, while the sweat of hippos is actually tinted red!