Everything you need to know about hail

Here are a few tips to help avoid damage during a hailstorm.

Hail is a dangerous and damaging severe weather phenomenon that comes in a variety of shapes and sizes. So what causes hail to take on different forms?

Hail is a chunk of ice that can fall during thunderstorms. As such, it is more common to see this precipitation type during the spring, summer and fall months when thunderstorms are more frequent.

How does hail form?

It may seem unusual that large chunks of ice can fall from the sky during the warmer months, but hailstones originate high in the atmosphere where the air is much colder than the surface.

"Inside a thunderstorm, there are water droplets that can survive in below freezing conditions," said AccuWeather Meteorologist Brett Rathbun. "These are known as supercooled water droplets."

Thunderstorms also contain a rising column of air, known as an updraft. The speed of these updrafts varies with each thunderstorm and plays a key role in the formation of hail. 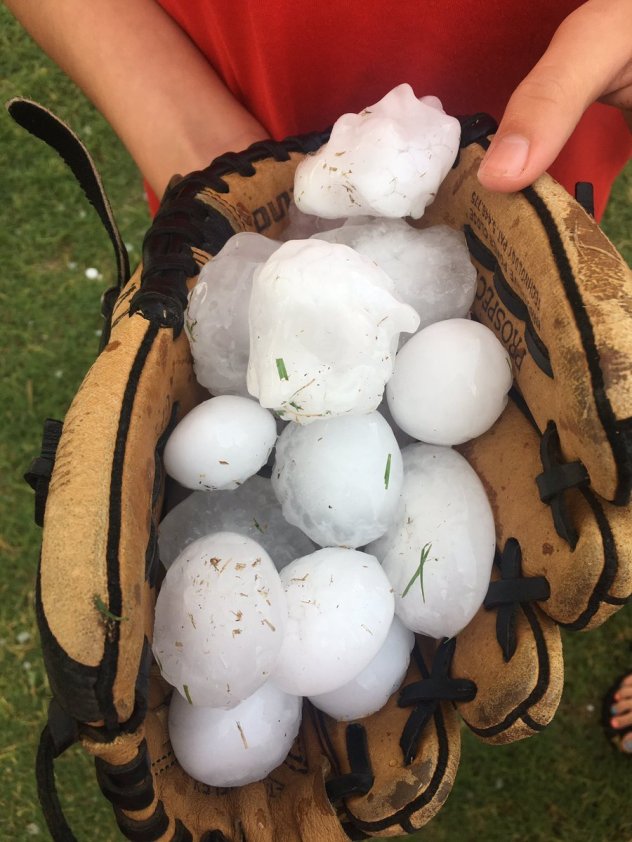 "When water droplets remain lofted inside a thunderstorm due to these updrafts, they can occasionally collide and freeze together, forming hailstones," Rathbun said.

Once the hailstones become heavy enough to overcome this column of rising air, they fall to the ground.

Different shapes and sizes of hail

The size of hail is directly linked to the strength of a thunderstorm.

"The stronger the updraft, the larger the hailstones are possible," Rathbun said.

A strong updraft allows hailstones to make several loops inside a thunderstorm cloud, causing them to grow in diameter as they collect layer upon layer of ice with each go-round.

A hailstone that is cut in half will commonly have rings of ice, similar to tree rings, due to this up-and-down motion in the cloud. 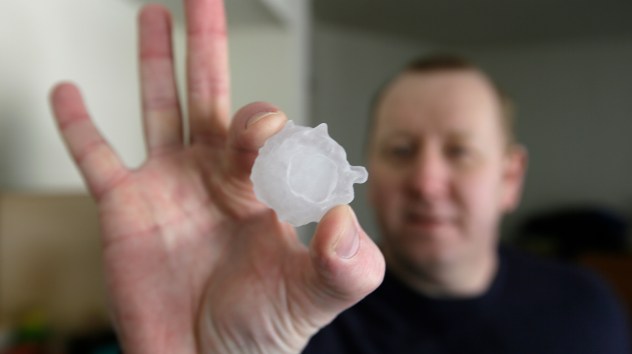 James Bradley shows a piece of hail left from a storm that smashed out his apartment's windows Thursday, March 24, 2016, in Plano, Texas. (AP Photo/LM Otero)

Hail is classified based on its diameter, with its size being compared to a commonly known object. Hail sizes typically range from as small as peas to as large as softballs.

Hail must be 1 inch in diameter or larger in order for a thunderstorm to be considered "severe." A thunderstorm can also reach this criteria if it contains winds of 58 mph or greater, or a tornado.

A hailstone that fell in Vivian, South Dakota, on July 23, 2010, holds the United States' record for largest hail size with a diameter of 8 inches and heaviest weight at 1.94 pounds. 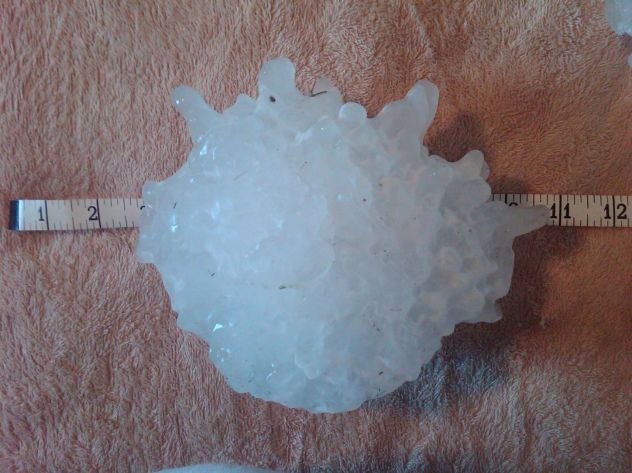 An image of the record-setting hailstone that fell in Vivian, South Dakota, on July 23, 2010. (Photo/NWS Aberdeen)

The diameter of this hailstone was comparable to that of a volleyball, which is around 8.15 inches.

A 7-inch hailstone that fell in Aurora, Nebraska, on June 22, 2003, held the previous diameter record, and a hailstone weighing 1.67 pounds in Coffeyville, Kansas, on Sept. 3, 1970, held the old weight record, according to the National Weather Service (NWS).

In addition to varying sizes, hail can also come in different shapes, ranging from smooth to jagged.

"If you drop any object in the air, it often tumbles or rolls before it reaches the ground, which is also what a hailstone does," Rathbun said. "This can cause hailstones to come in various shapes, depending on how or where water droplets stick to the hailstone."

Why are hailstorms most common in spring?
What are your chances of being killed by hail in the US?
How to safely shelter in place if you ran out of time to evacuate before severe weather strikes

"The reason why this area gets so much hail is that the freezing levels (the area of the atmosphere at 32 degrees or less) in the High Plains are much closer to the ground than they are at sea level, where hail has plenty of time to melt before reaching the ground," according to NOAA NSSL.

Hailstorms can bring a variety of impacts ranging from damaging siding, vehicles, windows and crops to injuring or killing livestock and people. 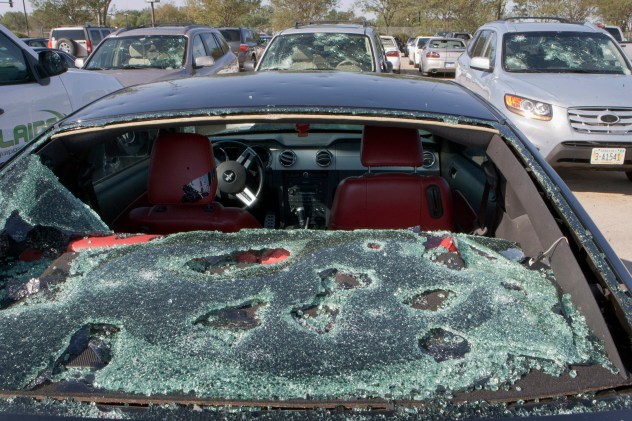 The larger the hail, the greater the risk of costly damage.

Any person or animal that is outside when a hailstorm strikes can sustain life-threatening injuries, making it vital to head indoors or provide animals with proper shelter before a thunderstorm strikes.

If a hail-producing thunderstorm is also slow-moving, enough hail can accumulate for shovels and plows to be needed for its removal.