Why are hailstorms most common in spring?

Find out what causes hail and how it forms.

While many associate spring with warmer weather and longer days, it also brings an uptick in severe weather with more hailstorms than any other time of the year.

Severe weather reaches its peak in the spring as cold air from the north frequently clashes with warm, humid air from the Gulf of Mexico, setting the stage for intense thunderstorms over parts of the central and southern United States.

These storms can spawn all modes of severe weather ranging from strong winds to destructive tornadoes, but the thunderstorms in spring can lead to large hail more often than any other time of the year.

“The main reasons that hail occurs with the greatest frequency during the spring is that the jet stream and energy higher up in the atmosphere is still rather strong as compared to the summer months,” AccuWeather Storm Warning Meteorologist William Clark said. 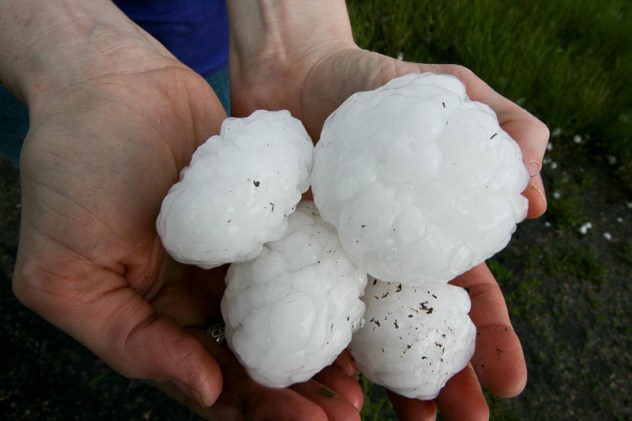 Hail develops when rising air in a thunderstorm, known as the updraft, lifts water droplets high into the atmosphere where temperatures are below freezing.

This causes the water droplets to turn into hailstones before falling down to Earth. The stronger the updraft, the larger the hailstones can become before succumbing to the pull of gravity and falling to the Earth’s surface.

“In the spring, the freezing levels in the clouds are much lower [than they are during] the summer, allowing the hail to more easily reach the ground,” Clark said. 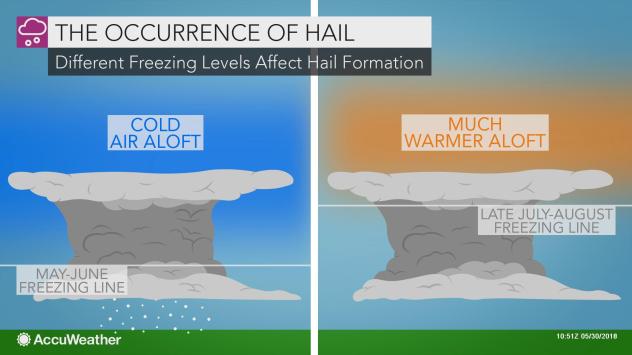 The lower freezing level in the thunderstorm means that hailstones have a shorter distance to travel before reaching the ground, reducing the chance that they melt as they fall through warmer air at lower levels in the atmosphere.

“For that same reason, more hail falls in the High Plains and Mountain West, because the freezing layer is closer to the Earth and the hail doesn't have to fall as far,” Clark added.

Preparing for severe weather: How to protect your car from thousands of dollars in hail damage
The difference between tornado watches and warnings
How a single lightning strike can claim many lives

The south-central United States is the area at greatest risk of hailstorms in the spring as this is typically where the ingredients come together.

Hail in this region can easily grow larger than the size of baseballs, which can cause significant damage to vehicles and buildings as well as serious injury to people.

This can lead to millions of dollars worth of damage in just minutes if the hailstorm hammers a populated area. In 2016, it is estimated that one hailstorm in San Antonio, Texas, led to more than $1 billion in damage.

Hailstorms are also possible across parts of the western United States, including California, as storms impact the region during much of the winter and spring.

Hailstones associated with storms along the West Coast are typically smaller, generally ranging from the size of peas to quarters. However, the quantity of hail that falls can still be disruptive.

On Feb. 26, 2018, a hailstorm moved over Sacramento, California, dumping inches of pea-sized hail across the city. The ice covered highways for hours and made some roads impassable to traffic. 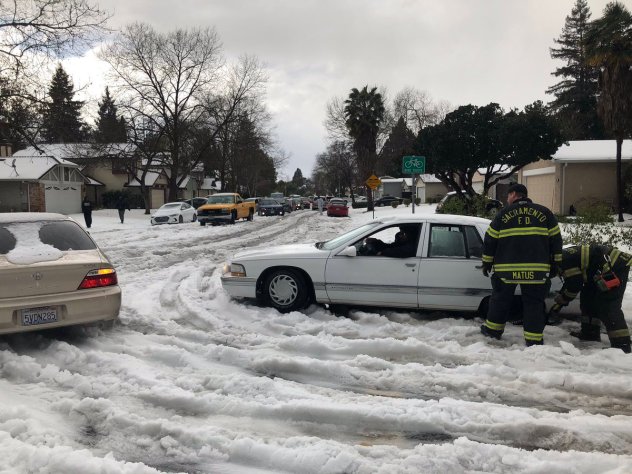 Although spring brings the highest chance for hailstorms throughout the year, autumn brings a secondary, smaller peak in hailstorms.

“There is also a second brief 'hail season' in the early fall as air [higher in the atmosphere] cools back down, but heat and moisture at the surface are still quite high,” Clark said.

The areas at risk of hailstorms in the fall extends farther than in the spring, including parts of the Midwest and East.