What are your chances of being killed by hail in the US?

Large hail bounced off this home as it battered Cocoa,Florida, on March 27.

Hailstorms are notorious for inflicting costly damage upon property and crops every year in the United States. Annually, the destruction from these frozen rain pellets that travel dozens of miles per hour through the atmosphere results in $1 billion in damage, according to the National Oceanic Atmospheric Administration (NOAA).

Hail also poses a safety threat to both humans and animals. NOAA estimates that 24 people in the U.S. are injured each year, with some injuries significant enough to land them in the hospital.

On May 5, 1995, severe storms brewing over the Dallas-Fort Worth metroplex in Texas produced damaging winds, heavy rain and extremely large hail, according to the National Weather Service (NWS). 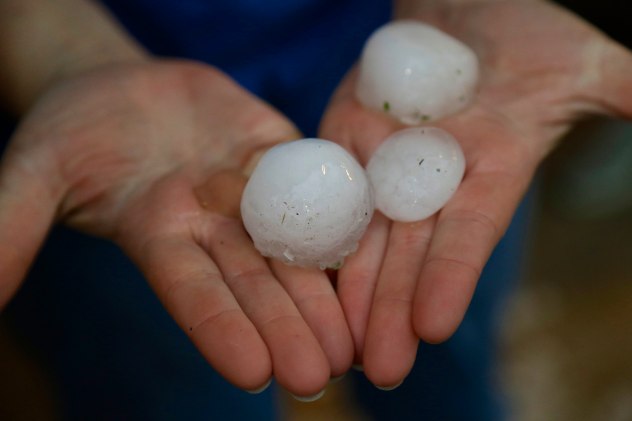 The storms, which remain some of the costliest in history, also impacted an outdoor festival called Mayfest, where over 10,000 people were caught out in the open with little to no shelter from the hail. More than 400 people were hurt after being pelted with hail up to the size of a softball, which is about 4 inches.

Although no one was killed, about 60 people were seriously injured.

“What injuries we do see are to people who are out in the open, like farmers, golfers, landscapers – anyone that’s doing outside work that doesn’t have any means to find shelter right away in a storm,” said AccuWeather Senior Meteorologist Dan Kottlowski.

However, how likely is it that a hailstorm can actually kill you?

The odds are low, but it can happen, experts say.

The World Meteorological Organization reported that the highest mortality associated with a hailstorm happened near Moradabad, India, on April 30, 1888. The deadly storm killed 246 people with pieces of hail as large as “goose eggs, oranges and cricket balls.”

In the U.S., hailstorms resulting in loss of human life are quite rare. “Hail has to be really large to cause serious injury to people, or even death,” Kottlowski said.

NOAA keeps records of hail and other severe weather fatalities each year. Since 2000, only four people have been killed by hail. One of these deaths happened in 2005, another in 2008 and two more in 2000.

What determines hail size? Preparing for severe weather: How to protect your car from thousands of dollars in hail damage Why are hailstorms most common in spring? What is the difference between freezing rain, sleet, snow, hail and graupel?

A 19-year-old man, Jose Carlos Oseguera, was one of the victims killed in 2000, when a softball-sized hailstone struck him in the head in Lake Worth Village, Texas, on March 28.

Hail can occur during any thunderstorm, but larger hail seems to occur more often during warmer months because the heat that builds the thunderstorms up higher in the air also strengthens the storms.

If you're ever caught outdoors during a hailstorm, the U.S. Forest Service advises to seek shelter immediately, and to find something to protect your head if you're not able to shield your entire body from being pelted.

If you're driving, it's recommended that you pull over safely to the side of the road away from any trees, and if possible, pull into a sturdy garage or other shelter to minimize damage to your vehicle. Your car can also protect you from hail, so staying inside of it is your best bet against being harmed.