Most cars weigh between 2,500 and 3,000 pounds (1,100 to 1,360 kilograms), but many will float for a period of time if they're in as little as 12 inches (30 cm) of water. How is that possible? Let’s find out with this at-home activity from AccuWeather On-Air Meteorologist Geoff Cornish and his adorable helper:

The second the tires lose contact with the road beneath, moving water can carry cars downstream and very bad things can happen. Eventually, most cars will sink, but only after the inside fills with water – and that can take several minutes or longer to occur. 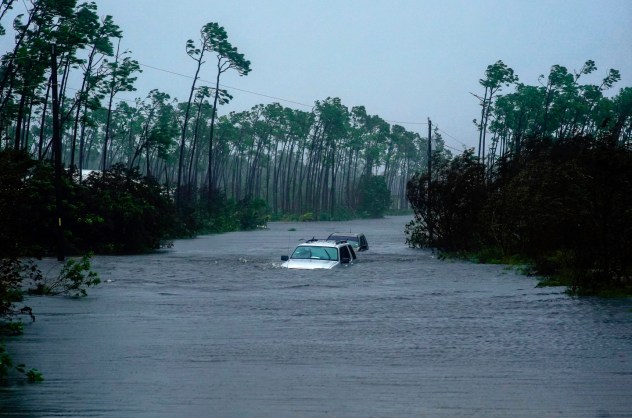 Submerged car sit submerged in water from Hurricane Dorian in Freeport, Bahamas, Tuesday, Sept. 3, 2019. Dorian is beginning to inch northwestward after being stationary over the Bahamas, where its relentless winds have caused catastrophic damage and flooding.(AP Photo/Ramon Espinosa)

Even though a car is very heavy, your family's vehicle can float – so meteorologists say "Turn Around, Don't Drown" when someone encounters a flooded roadway. To help you remember that very important phrase, let’s gather around the campfire and learn this catchy tune!

You are stuck outside during a thunderstorm and have nowhere to go – do you lie flat on the ground? Or you are inside your house, does that make 100 percent safe from lightning? It’s shockingly true (literally!) that the answer to both of those questions is no:


Let’s continue our game of lightning safety fact or fiction – does wearing jewelry put you at a greater risk of being struck by lightning? False!

Lightning is not attracted to anything, including metal and jewelry. It doesn’t matter if you are wearing a necklace or have coins in your pocket; if you are outside and hear thunder, you can be struck by lightning. 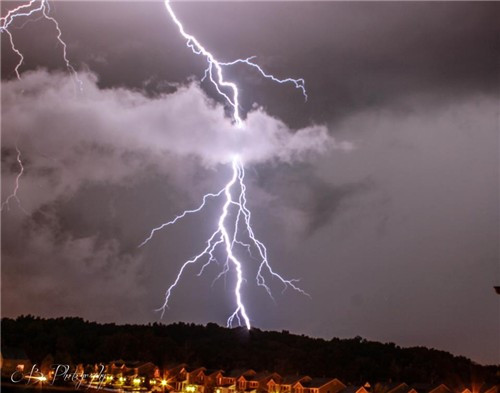 Special thanks to our friends at the National Weather Service for help with these lightning safety tips.

🔬 July 30 - Invention Station: Make a windsock, not for your feet!

An anemometer will tell meteorologists how fast wind speeds are, while a wind vane determines which direction the winds are blowing from. A windsock does both and is easy to make at home!

Windsocks are mainly used at airports, so pilots can quickly tell what the wind direction and speed is. Think of a windsock like a tree. A tree won’t tell you the exact wind speed, but you get a good sense of how windy it is by seeing how much the tree is swaying.

Looking at a windsock, you can tell winds are calm if the windsock is hanging down and strong if the windsock is sticking straight out. As Joan Baez famously sang, “The answer, my friend, is blowing in the wind.” (Pop quiz: Parents, did you get that musical reference?) See you at camp on Friday!

There are certain tracks that hurricanes typically take – did you know that the Outer Banks of North Carolina tend to be hit more by hurricanes than Jacksonville, Florida? Or that tropical systems that enter the Gulf of Mexico typically head to Florida and not Texas later in hurricane season?

Meteorologists use what has happened in the past to help forecast current tropical storms and hurricanes – but, a few storms will go against the norm. That is exactly what happened with the 1933 Florida-Mexico hurricane that made an unusual track across the Gulf Mexico. Let’s learn more by listening to the This Date in Weather History podcast:

When you hear meteorologists say that a tropical wave may strengthen into a hurricane, they aren’t talking about the waves that you see at the beach:

Interesting, too, is that Africa is also where dust from the Sahara Desert, which is the kryptonite of hurricanes, comes from.

July 29 is traditionally known as “Rainy Day” in Waynesburg, Pennsylvania, where it has rained 111 times out of the past 135 years on this date:

As you heard in the This Date in Weather History podcast, rain on July 29 is far from unusual in southwestern Pennsylvania. However, if you live in San Francisco or Los Angeles, you would be happy to see rain this time of year.

Late spring to early fall is a very dry time for most of California – that’s why the state and other parts of the West deal with a fire season before the rainy wet winter months.

Here’s a fun activity to make it sound like rain in your house – make a rain stick!

All you need is a paper towel roll, aluminum foil, rice, clear tape, wooden spoon, broom handle, and colored paper. If it makes this activity easier, you can also grab a funnel. Now, let’s see how AccuWeather Senior Meteorologist Jason Nicholls puts it all together into a rain stick:

The key to knowing whether the air is comfortable or sticky lies with the dew point temperature. 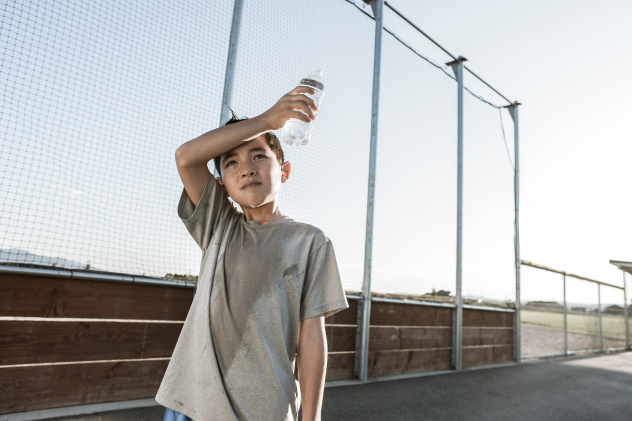 Instead of paying attention to how high the relative humidity is, use this cheat sheet instead to know how humid it is (and don’t forget to check out the AccuWeather RealFeel® Temperature to find out how hot or cold it will actually feel outside): 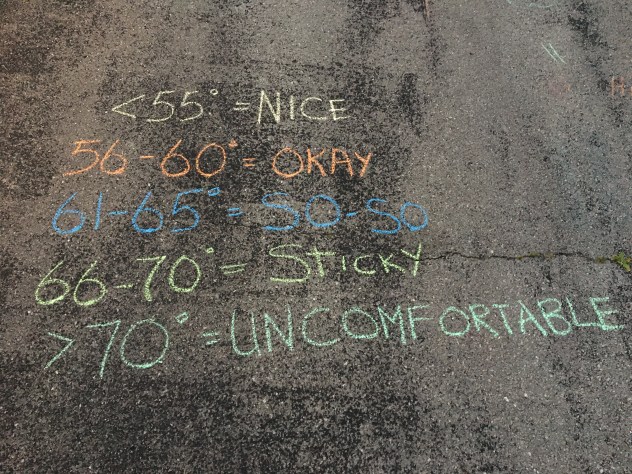 Depending on where you live, you may have slightly different adjectives for these ranges – the point is that the higher the dew point, the more uncomfortable the air is since it takes longer for your sweat to evaporate – which sweat is your body’s way of cooling itself down.

Most of us have heard of asteroids, meteors and even meteorites – they are all rocks from outer space, but what are the differences that distinguish each from the other? The answer lies in their final destination:

If you want to have fun with sidewalk chalk and show everyone what you learned today, you can mimic the drawing shown below: 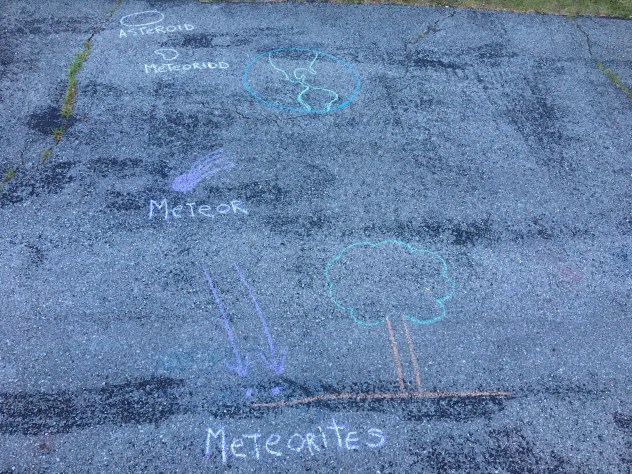 Don’t try and draw all of the asteroids that NASA is aware of – you would have to find enough room for 990,048 asteroids! NASA also estimates that if you would combine all of the meteors that fall on Earth each day, it would add up to about 48.5 tons (44,000 kilograms) – good thing those meteors are small space rocks and most burn up in Earth’s atmosphere before hitting the ground!

One more thing – notice how there is a meteoroid drawn in the photo above, but that wasn’t in the video. A meteoroid is a small asteroid. Think of a meteoroid as a space rock, and an asteroid as a massive space boulder.

You get your AccuWeather forecast from a meteorologist – wait a minute, doesn’t it make more sense for a meteorologist to study meteors and not the weather? We have to go all the way back to around 340 BC when Aristotle from ancient Greece wrote the first weather book, Meteorologica.

The book’s title came from the Greek word that means lofty or in the air, which would refer to meteors, clouds, rain or snow. As time went on, astronomers took on the job of studying meteors and meteorologists focused on the weather. Maybe if it worked out the other way, all of us at AccuWeather would be called weatherologists!

Do you make a wish when you see a shooting star? If you see a pretty color made by that shooting star, it may make you think that wish is bound to come true!

“If seen out of the corner of your eye, a meteor may appear to give off a flash of white light, AccuWeather Digital Journalist and Meteorologist Brian Lada said.” It’s when the sky is totally clear or if you catch a picture of a shooting star when you have a better chance at seeing the streaks of color.

How fast or slow the meteors zip across the sky can also lead to a different color – slow meteors are typically red or orange, while the faster ones can leave a brief trail of blue.

🔥 July 27 - Campfire Tales: First hurricane to be flown into, on purpose

Brave men and women fly into hurricanes – all to keep us safe. The National Oceanic and Atmospheric Administration’s hurricane hunters collect data that meteorologists otherwise wouldn't be able to analyze. That in turn leads to better forecasts, so everyone in the path of these dangerous storms can get out of harm’s way.

When was the first flight into a hurricane (that happened on purpose)? That took place back on July 27, 1943, during the first hurricane of that year’s Atlantic hurricane season. Let’s learn more about this historic flight, which paved the way for today’s hurricane hunters with the AccuWeather This Date in Weather History podcast:

Last year was an exciting moment for the hurricane hunters as the first all-female crew in history flew into Hurricane Dorian. 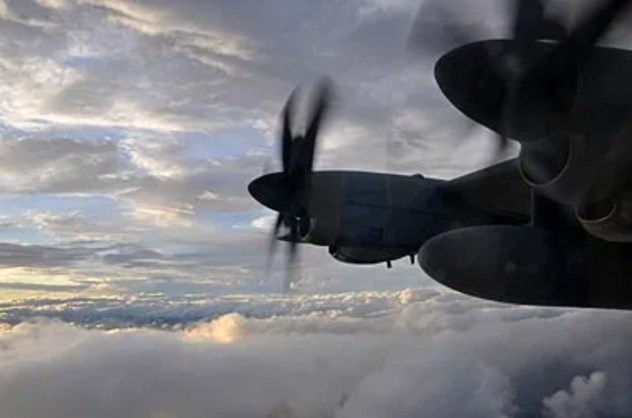 🔎 July 27 - Weather Detectives! How does a hurricane get so powerful?

We learned earlier that strong wind shear can weaken a hurricane or not let it form, but what is the prime ingredient to allow these storms to get so dangerous and powerful? Here’s a hint – why is it better to go swimming in the ocean later in the summer than spring?

The Atlantic hurricane season peaks around Sept. 10 – that’s around the same time when the ocean is at its warmest.

Hurricanes produce really strong winds that can destroy homes, but winds over the area where the hurricane is forming or moving through have to be light or the hurricane may never exist. Time to get out our birthday candles to understand that:

AccuWeather Senior Meteorologist Bob Larson challenges you to try to light birthday candles in front of a fan, again with the help of an adult. Having trouble doing that?

“Similarly, if there is a lot of wind high in the atmosphere [that’s wind shear], it will not let the hurricane form,” Bob said.