February will arrive with a bang as a nor'easter is expected to spread heavy snow throughout the Northeast.

Winter storm warnings were in effect Sunday from western North Carolina to northeastern Pennsylvania and northern New Jersey, including several major cities, as millions of Americans braced for an approaching nor'easter. Winter storm watches remained in place for other parts of the Northeast and New England, including Boston.

Cities like Washington, D.C., Baltimore, Philadelphia, and New York City could see the season's biggest snowfall from the storm as blizzard conditions will be possible in some areas. The nation's capital hasn't had a major snowstorm in nearly two years. 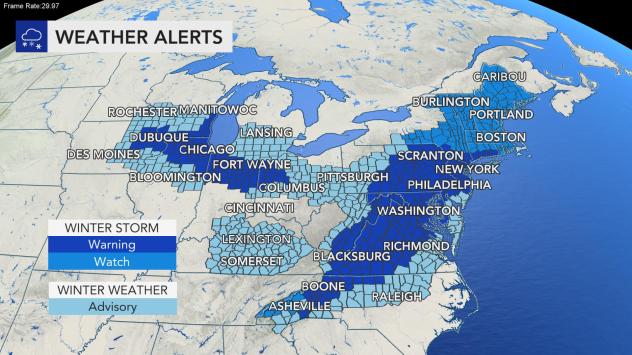 The major weather maker creating the wintry blast is the same storm that pummeled California with heavy rains and feet of snow. That system had moved across the country and was delivering a shot of winter weather across the Midwest Saturday into Sunday. As the storm fully emerges across the Ohio Valley, AccuWeather forecasters expect it to interact with a developing low forming off the Atlantic coast and erupt into a full-blown nor’easter.

"The storm is far from winding down as it will have major impacts from coast to coast," AccuWeather Chief Broadcast Meteorologist Bernie Rayno said. 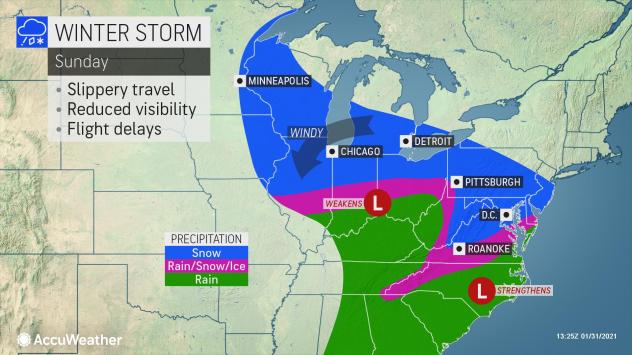 “As we start to get a secondary storm to develop along the coast of South Carolina,” Rayno said, "then that storm will get guided up along the Eastern Seaboard."

AccuWeather forecasters warn that the secondary storm along the Eastern Seaboard will evolve into a major and long-lasting nor'easter and will pound areas with accumulating snow and gusty winds. Blizzard conditions may unfold for multiple hours, mainly in areas near the mid-Atlantic and New England coasts.

The storm is expected to take a track just off of the mid-Atlantic and New England coast, with enough cold air in place to bring snow right to the coast. 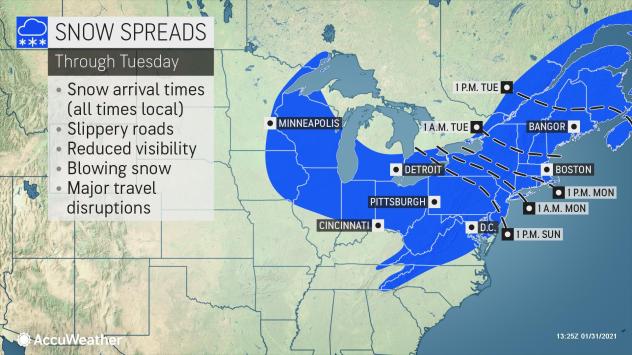 The potential remains for the storm to track just right to set up the band of heaviest snow right smack over the Interstate 95 corridor from Washington, D.C., to Boston.

The developing nor'easter will likely bring heavy snow to some areas that have had little thus far this winter, which is just about at the midway point.

"At this stage, it appears that areas along Interstate 95 from Washington, D.C., to Baltimore and Philadelphia will probably pick up at least a few inches of snow," AccuWeather Senior Meteorologist John Feerick said. 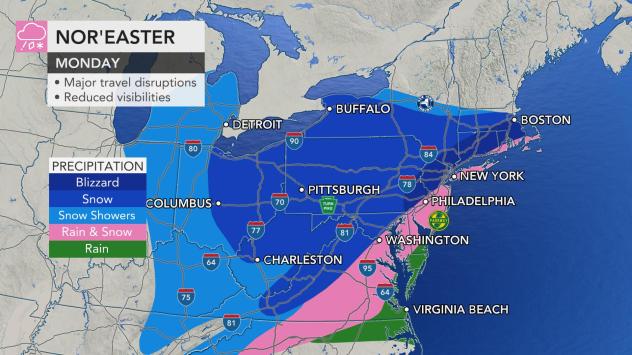 "Additionally, confidence is growing that much of the Interstate 95 corridor from Washington D.C. northward will see several inches, with totals possibly exceeding a foot in some spots."

It would take more than 7 inches of snow for Washington, D.C., to get back on average pace for snow this winter. Thus far, only 0.3 of an inch of snow has fallen in the city. By Jan. 28, the normal snowfall is 7.5 inches in the nation's capital.

Farther to the north, New York City is close to its seasonal average to date with 10.6 inches. The upcoming storm has the potential to pad the Big Apple's total for the winter of 2020-21 and perhaps double it.

Another factor that is likely to contribute to substantial snowfall with this storm will be the duration. Snow of varying intensity may occur for two to three days in some locations, instead of the more typical eight to 12 hours that occurs with most winter storms. 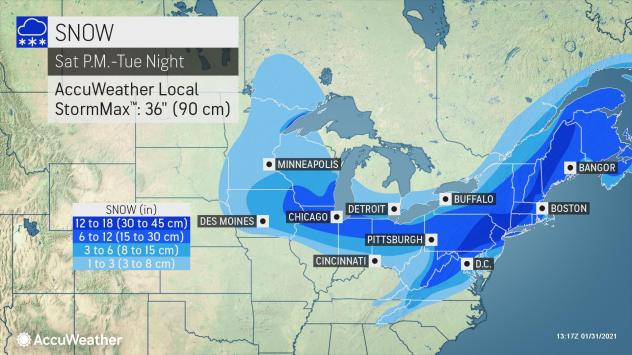 Some locations in the central Appalachians can expect rounds of snow from late Saturday night to Monday night. In much of the mid-Atlantic, the storm is forecast to extend from Sunday to Tuesday. Part of New England will face storm impacts from Monday to early Wednesday.

"This can allow for snowfall totals to really build up over large areas of the Northeast," explained AccuWeather Meteorologist Brett Rossio.

Some milder air higher in the atmosphere could cause precipitation to change to a wintry mix, including sleet, then perhaps rain near the coast. This scenario is most likely near Cape Cod as well as the southern mid-Atlantic coast.

"Much of the Jersey Shore, Long Island and New England coast could remain just cold enough at all levels of the atmosphere to stay all snow through the storm," Rossio said. 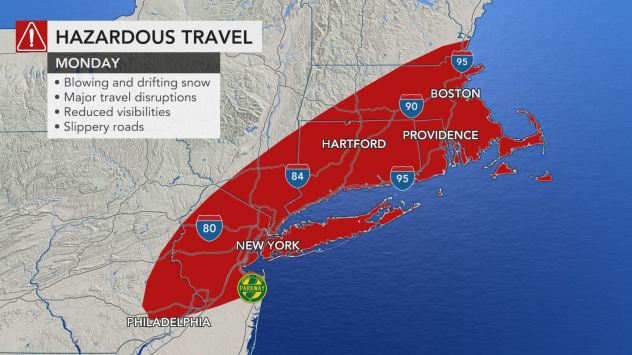 AccuWeather meteorologists expect New York City to see a major snowfall from this event, with somewhere in the range of 10-15 inches possible. Boston could also see significant snowfall from the storm, about 6-12 inches, even if there is some mixing for a brief time.

"If this mix does not occur, or dry air fails to move in, snowfall in this zone could be even heavier," Feerick said. 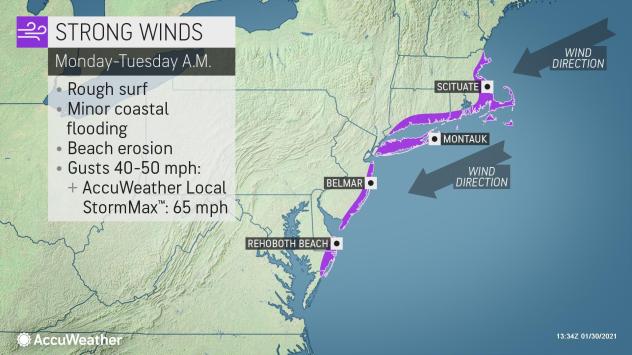 As the storm strengthens along the coast Sunday night, wind will also become a significant factor for coastal areas. Strong winds near the coast will continue into Tuesday. Along with combining with the snow to create blizzard conditions at times for some, rough surf, coastal flooding and beach erosion will also be factors. There can also be some localized wind damage and power outages.

Farther south, a southward wedge of Arctic air will keep much of Virginia and northwestern areas of North Carolina below freezing for multiple hours during the storm. With this developing cold wedge, an extended period of an icy mix is expected over this part of the interior Virginia and North Carolina. Heavy snow is forecast to fall in the higher elevations of the southern Appalachians. 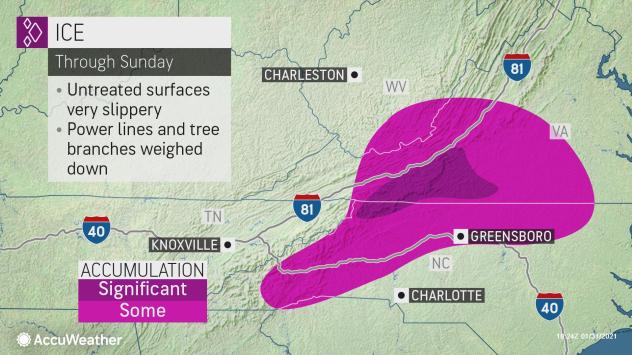 In a narrow zone through southwest Virginia, significant ice accumulation can occur, around 0.25 of an inch in spots. This could be enough to weigh down tree limbs and power lines to the point of failure, causing some localized power outages.

Throughout the area where ice is expected, travel could be treacherous for a time with untreated surfaces becoming very slippery.

A gap is likely to develop between the storm winding down in the Midwest and the storm that ramps up along the Atlantic coast during early next week. As a result, snowfall amounts may be less around parts of western, central and northern New York state to parts of northern Pennsylvania. But the long duration of even lighter snow could still lead to a thick blanket of snow in the end. 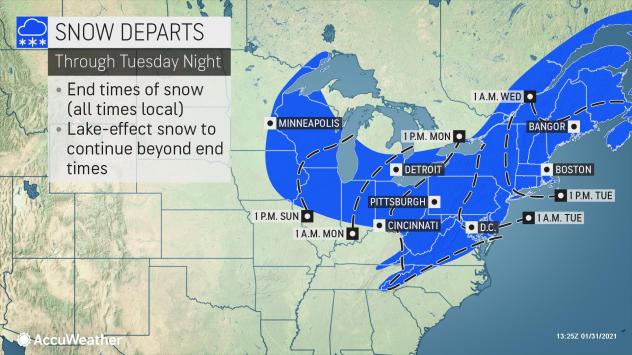 At the same time, snow will come down at a dizzying pace along some major routes farther to the east, with intense snow rates that could become heavy enough for thundersnow to occur in the heaviest snow bands that develop.

A swath of 12-18 inches of snow is likely to occur from eastern Pennsylvania through New England, with AccuWeather calling for a StormMax™ of 36 inches of accumulation where the heaviest snow comes down. However, other isolated pockets of snowfall over a foot could also occur throughout the 6- to 12-inch snowfall zone.

Chicago bracing for another thumping of snow
Man made it a life mission to stamp out use of ‘pretentious’ weather term
Washington, DC, hasn't had snow like this in 2 years