A debris flow washed away a section of Highway 1 in Big Sur, California, on Jan. 29. Flooding the day before caused the road to begin crumbling.

A record-breaking wildfire season was followed by record-breaking COVID-19 numbers, which left millions of Californians displaced and millions more struggling to get by in 2020. Less than a month into 2021, those struggles have been multiplied by a slew of wintry weather including heavy rain, even heavier snow and powerful winds, which have toppled outdoor restaurants' dining setups.

After a drenching storm that brought California much-needed rain, a huge section of Highway 1 collapsed near Big Sur, California, on Friday.

The washout was triggered when debris flow from the hillside above the highway "overwhelmed drainage infrastructure, flowed across the highway and eroded the road resulting in the complete loss of a segment of Highway 1" at Rat Creek, about 15 miles south of Big Sur, California Department of Transportation (Caltrans) officials said in a statement.

CNN reports California Highway Patrol Officer John Yerace said he was in the area on Thursday around 4 p.m. when he noticed "this section of roadway, specifically the southbound lane, had fallen off into the ocean."

Officials shared photos and drone footage from the scene showing the massive gap in the highway that runs along much of the California coast. 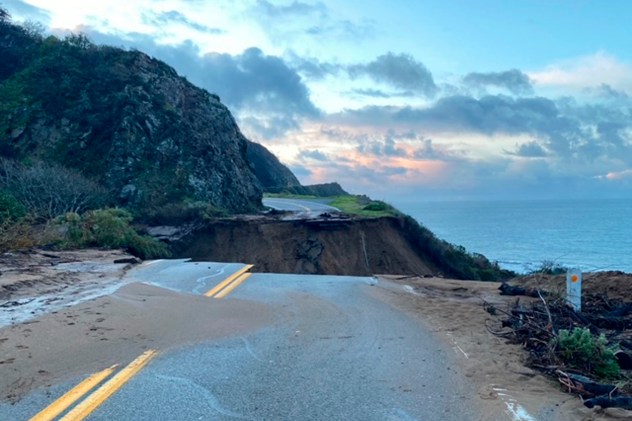 In this photo provided by Caltrans, a section of Highway 1 is collapsed following a heavy rainstorm near Big Sur, Calif., on Friday, Jan. 29, 2021. (Caltrans via AP)

On Thursday afternoon, at least 16 mudslides had been recorded by the National Weather Service (NWS), seven of which occurred in Monterey. Many of the mudslides have been triggered by loosened soil in burn scar areas left weakened by the active wildfire seasons in recent years.

Around 75% of the residents in the area were under evacuation orders, according to Deputy Fire Marshall Dorothy Priolo, but numerous emergency rescues were still needed. 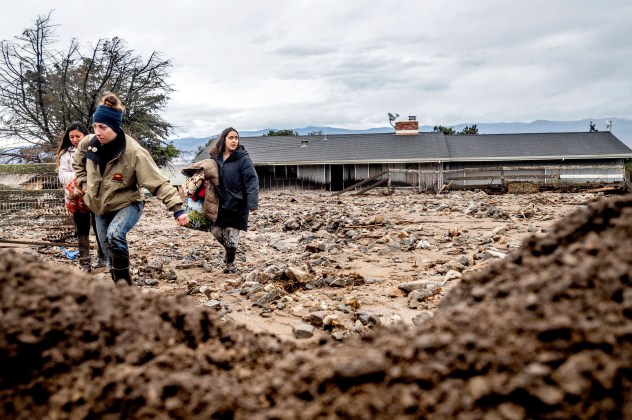 Hana Mohsin, right, carries belongings from a neighbor's home which was damaged in a mudslide on Wednesday, Jan. 27, 2021, in Salinas, Calif. The area, located beneath the River Fire burn scar, is susceptible to landslides as heavy rains hit hillsides scorched during last year's wildfires. (AP Photo/Noah Berger)

"A few residents in their vehicles had been trapped in a mudslide so they were able to get out but as we discovered in the neighborhoods, some homes, between 20 to 25 residences and outbuildings had been at least partially damaged by the mudflow," Priolo said, according to KION.

Two horses from Alameda County needed to be rescued after they got stuck in their pens from mudflow and rain.

In the city of Salinas, landslides have been triggered by widespread flooding in the River Fire burn scar. The River Fire was one of two giant blazes from 2018 that combined to form the Mendocino Complex Fire, which eventually grew into the single-largest recorded wildfire at the time.

On River Road, where the fire began more than two years ago, sliding mud and debris trapped numerous families and required the rescue of more than 50 horses, KSBW reported. Priolo said on Thursday morning that one woman from the area was being treated for broken bones. 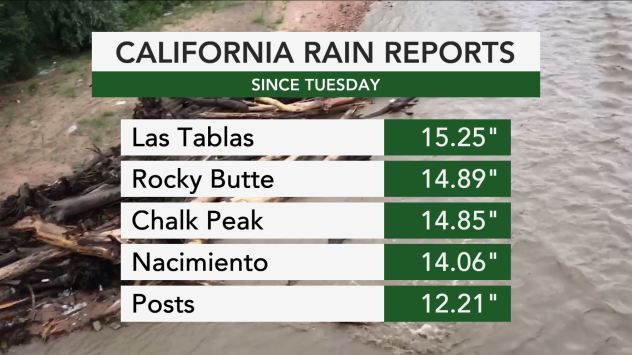 The blast of wintry weather walloped the region thanks to a stalled atmospheric river "on steroids," as Extreme Meteorologist Reed Timmer called it on Twitter, dumping flood-triggering rain along the coast of California and blanketing inland areas of the state with dizzying snow totals.

At Mammoth Ski Resort, located along the east side of the Sierra Nevada mountain range, 45 inches of snow fell in the span of 24 hours, boosting the current storm total to a staggering 87 inches, according to the resort's website.

Just 30 miles away, the punishing storm has left Yosemite National Park closed for the foreseeable future. The park was initially shuttered last week to address damage caused by powerful winds before this week's storm caused more damage to the area.

Yosemite will remain closed at least until Saturday, January 30. Park staff continue to work toward restoring safe conditions after last week's Mono wind event. When the park reopens, it will be open 24 hours a day. Areas south of Yosemite Valley will remain closed. pic.twitter.com/JDjuFCE2nw

On Thursday, the NWS office in Hanford reported that 32 inches of snow had fallen in one area of the park since Wednesday morning.

Some of the most significant damage came from the hurricane-force winds that topped 100 mph in multiple areas of the state on Wednesday.

In Yosemite, those fierce winds downed two massive sequoias, which reportedly damaged an area that had recently undergone a $40 million renovation. The fallen trees destroyed millions of dollars worth of vehicles, employee homes and other facilities, according to EcoWatch.com. 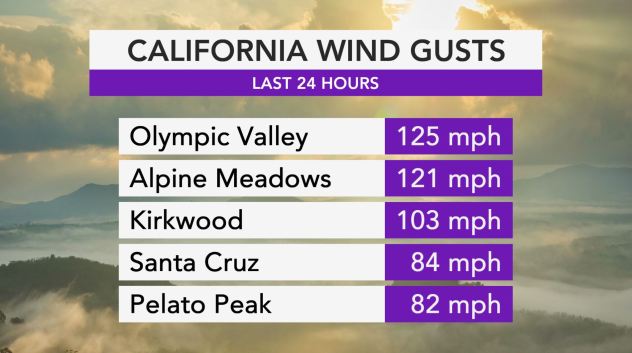 In Sacramento, the strong winds ripped outdoor dining setups to pieces, as tents in the North Natomas area proved no match for the winds that topped 60 mph.

The mix of wintry destruction left more than 112,000 people without power in the state, according to PowerOutage.us. By 7 p.m. PST, the number of outages had dropped to just under 78,000. The number continued to fall on Thursday night, with slightly over 56,000 outages as of 1 a.m. PST early Friday morning. 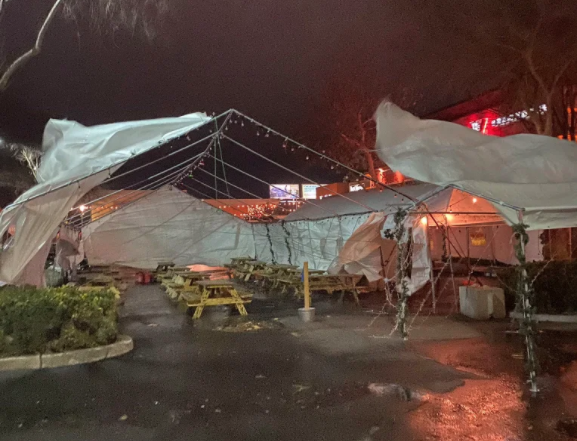 In Sacramento, tents set up for outdoor dining were ripped to pieces by fierce winds on Wednesday. (Photo via @StocktonPolice)

AccuWeather Senior Meteorologist Alex Sosnowski said the worst of the storms may still lie ahead.

"The storm is far from over, and in much of Southern California, the worst of the storm is yet to come. Rain, snow and wind from the storm are forecast to continue across the state into Friday," Sosnowski said. "Meteorologists have been sounding the alarm that the potent storm will bring extreme impacts, with an AccuWeather StormMax™ of 10 feet of snow and 20 inches of rain expected. Peak winds will continue to top hurricane force (74 mph or greater)."

AccuWeather's annual sneak peek at US spring weather
Snow was so deep, city had to dump it off bridges
Dashcam video shows scary cliffside crash amid snowy conditions