Scramble underway across Florida to evacuate or hunker down as Hurricane Ian closes in. Follow live updates.
Hurricane Ian within 265 miles of Sarasota. Get the latest on storm's timing and track.

What exactly is a nor'easter? 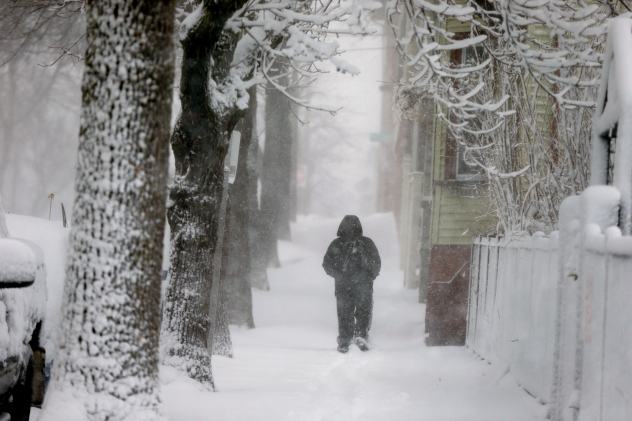 A man walks on Cottage Street in Boston, Tuesday, March 13, 2018. Boston found itself in the bullseye of three nor'easters in two weeks that year. (AP Photo/Michael Dwyer)

The strongest nor’easters in the past have been given nicknames like “The Storm of the Century" and “The Perfect Storm," and the term nor’easter may conjure up images of angry seas and fishermen shouting at each other over the roar of massive waves in a boat taking on water in the blockbuster 2000 film named after the latter. Given that, a forecast calling for a nor’easter -- a term that dates back hundreds of years -- can rightfully turn heads and make people living along the Eastern Seaboard pay close attention to the expected conditions.

For this reason, AccuWeather meteorologists typically reserve using the term nor’easter for the most intense such storms. Forecasters typically refer to a storm as a nor'easter when significant impacts to lives and property are expected.

However, in order for meteorologists to classify a storm as a nor’easter in the first place, it must meet specific criteria. It is true that some nor'easters unleash fierce blizzard conditions, but this alone is not a criterion for this type of storm. Nor is there a requirement for high winds or snowfall in the first place.

A nor'easter is simply any large storm that brings northeasterly winds along the Atlantic coast of North America, according to the National Weather Service (NWS) definition. These storms can stir a driving breeze from a northeasterly direction and trigger rain in place of snow. But, somewhere, within a nor'easter's circulation, winds are likely to blow from directions other than from the northeast. It's the coastal winds that matter the most when it comes to classifying a storm as a nor'easter.

Intense strengthening can occur as nor'easters move along strong temperature contrast zones, or cold fronts, in the eastern United States. Strengthening is especially likely if a storm rams into high pressure sitting over southeastern Canada or northern New England. In this case, the difference in pressure between the high and the storm -- marked by an area of low pressure -- can really cause winds to whip up. In the most severe cases, winds can approach hurricane force -- 74 mph or greater -- even when the storm is non-tropical in nature.

It is possible for a nor'easter to intensify dramatically enough to become a bomb cyclone, which is a storm that strengthens so fast that the central barometric pressure falls by 0.71 of an inch of mercury (24 millibars) within 24 hours.

These storms can occur during any month of the year but are much more common, and often become more severe, between September and April. Severe nor'easters can lash the East Coast with flooding rainfall, extreme snowfall, blizzard conditions, damaging winds, rough seas and coastal flooding.

In the nor'easters that rapidly ramp up and join forces with enough cold air, snowfall can quickly pile up with several inches falling per hour. The heaviest snow bands can even be accompanied by thunder snow.

Meteorologists are quick to clear up one common misconception around nor'easters -- not all of these storms move along in a northeasterly direction. Sometimes nor'easters can stall or move in other directions altogether.

Long before the social media era, nor'easter became a go-to term that forecasters tapped to raise awareness and explain storm severity, similar to the more recent viral catchphrases such as "superstorm" and "snowmageddon."

The word nor'easter was morphed from the word "northeaster," used by New Englanders. It became increasingly popular during the latter part of the 20th century, according to Boston.com's Alan Wirzbicki. However, the term "northeaster" may have originated back in the United Kingdom -- rather than in New England -- during the 1700s. Some accounts date the term back even earlier to late in the 16th century. A book about seafaring first mentioned the term in 1594, according to The Bangor Daily News.

Fast-forward several hundred years, and many of the storms that stand out as blockbusters for the East Coast often share one thing in common -- they were nor'easters. In fact, one even inspired a motion picture, starring George Clooney in 2000. The movie focused on the Halloween Storm of 1991 and was based on a novel called The Perfect Storm. The so-called Perfect Storm of 1991 lashed the coast of New England and the mid-Atlantic with damaging winds and coastal flooding as tremendous seas were stirred offshore.

"With the Perfect Storm, you just had the pounding of the coast for three days in a row or more with a strong, powerful onshore flow," AccuWeather Senior Meteorologist Dave Dombek said, explaining that the remnants of Hurricane Grace merged with a non-tropical storm from the Canadian Maritimes, an area of coastal southern Canada that includes the provinces of Nova Scotia, New Brunswick and Prince Edward Island, to form the formidable nor'easter. Waves as high as 100 feet and winds of 70 mph were reported in the Perfect Storm.

Just a couple of hundred miles farther inland, the weather across the central and southern Appalachians was generally dry and sunny -- and even tranquil -- as the storm raged along the Atlantic Seaboard.

Another notorious nor'easter, which has come to be known as the Storm of the Century or the Blizzard of 1993, walloped coastal areas, but impacts were also felt much farther inland. The storm unloaded 1 to 3 feet of snow across a massive area of the eastern U.S. When combined with wind gusts of tropical storm and hurricane force, the storm caused snowdrifts as high as single-story homes in parts of the Appalachians.

Emergency declarations were issued in a dozen states as significant snowfall shut down roads, airports and schools across the East Coast for days.

“I was outside for less than 5 minutes [during the height of the storm] and I was actually scared; it was actually scary to be outside. That’s how bad that storm was,” Dombek said, adding that it was clear to AccuWeather meteorologists days in advance of the storm's arrival that the worst-case scenario was about to unfold. It is estimated that the historic blizzard caused $6 to $11 billion in damages and killed more than 300 people.

Four nor'easters in a row pummeled the East Coast during the spring of 2018 within a three-week period during March. The first of the three storms each unleashed more than 2 feet of snow across parts of the East. New England was in the bull's-eye for snow from both the second and third storms, and power outages were widespread. The last storm to strike brought 8 inches of snow to Central Park and more than a foot of snow to parts of Long Island. 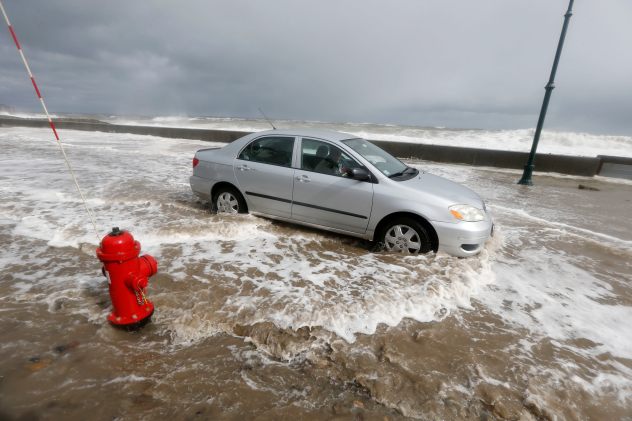 The back-to-back storms unleashed storm surge that rivaled levels caused by other major storms like Superstorm Sandy from 2012 and caused significant coastal erosion.

Despite the common use of the term nor'easter, some New Englanders have campaigned to drop its use altogether, calling it pretentious. Among them was a former editor for the Portland Press Herald by the name of Edgar Comee, according to The Bangor Daily News. A resident of Brunswick, Maine, he passionately worked to stamp out the term nor'easter and even was the tongue-in-cheek chairman of an Ad Hoc Committee for Stamping Out Nor’easter -- a committee of one, according to The New Yorker. At least it said so in postcards that he handed out to hundreds of journalists in the early 2000s.

“Now hear this!” the postcard read. “The use of nor’easter to describe a northeast storm is a pretentious and altogether lamentable affectation, the odious, even loathsome, practice of landlubbers who would be seen as salty as the sea itself.”

It went on to read: “You will of course accept my view in this matter in good part and will never again use nor’easter, at least in public, and thus oblige," and was signed, "Your most humble petitioner, Edgar Comee, Chairman, Ad Hoc Committee for Stamping Out Nor’easter.”

Comee -- who admitted his own wife from the mountains of North Carolina could care less about his cause -- added unknowing "members" to his committee as he recorded clippings from letters and print that shared similar sentiments to his on the term nor'easter. One of the most scathing of these referred to the use of the term as a "festering sore in today’s marine and weather journalism." That line was printed in The Working Waterfront by a seafood entrepreneur named Ed Myers.

Another letter he collected was sent to the Portland Press Herald, written by a G.W. Helfrich, and pointed out that should a contraction be used it ought to be no'theaster, given that New Englanders, who often face the fury of these tempests, "exercise considerable invention in avoiding the letter 'r.'"

However, meteorologists explain that the term -- regardless of the exact contraction used -- can be effective in warning those who live along the coast that a storm could unleash a slew of hazards. For now, at least, it appears the term isn't going anywhere.

ACE UPDATE: How does Ian stack up in terms of intensity and duration?