We often hear that a storm system is undergoing 'bombogenesis' or, more simply put, is developing into a 'bomb cyclone.' But what exactly do these foreboding weather terms mean?

You may have heard of a storm undergoing 'bombogenesis'. If you’ve also heard of the term 'bomb cyclone', they are the same phenomenon. What exactly do they mean?

You may have heard or read about a "bomb cyclone" or a storm system undergoing "bombogenesis." What exactly do these weather terms mean?

In simple terms, bombogenesis is a storm (low pressure area) that undergoes rapid strengthening. The vast majority of such storms occur over the ocean. The storm can be tropical or non-tropical in nature.

Other common phrases for bombogenesis include weather bomb, or simply bomb cyclone.

The term bombogenesis comes from the merging of two words: bomb and cyclogenesis. All storms are cyclones, and genesis means the creation or beginning. In this case, bomb refers to explosive development. Altogether the term means explosive storm strengthening.

A cyclone (non-tropical storm or hurricane) is essentially a giant rising column of air that spins counterclockwise over the Northern Hemisphere.

This image shows a storm over the Bering Sea in March 2015 that underwent bombogenesis. (NOAA/University of Wisconsin-Madison/Satellite)

When air rises, it produces a vacuum effect that results in lower atmospheric pressure. When a storm strengthens, the column of air rises at a faster and faster rate and the pressure within the storm lowers.

Average storms in the winter have a low barometric pressure reading of 29.53 inches of mercury.

Some of the most intense storms may have a barometric pressure below 29.00 inches.

However, it is not the lowest pressure that defines bombogenesis but rather how quickly the pressure within the storm plummets.

When the barometric pressure falls at least 0.71 of an inch (24 millibars) in 24 hours, a storm has undergone bombogenesis. 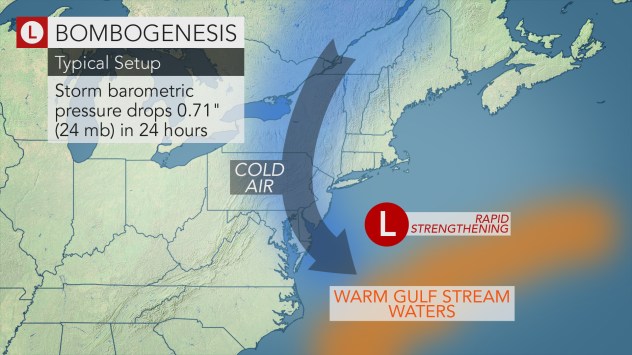 This animation shows the evolution of the March 1993 superstorm. (NOAA/satellite)

Other examples of storms that underwent bombogenesis: Hurricane Charley in 2004 and Hurricane Wilma in 2005; the Blizzard of 2015 (Jan. 26-27); the Bering Sea storm of December 2015; Storm Dennis, which impacted the United Kingdom on Feb. 14, 2020; and the storms that hit the northeastern and western United States in late October 2021.

Storms that undergo bombogenesis are among the most violent weather systems that affect a broad area. This is because the rapidly ascending air near the center of the storm must be replaced by air surrounding the storm. As these winds move toward the center of the storm at high speed, property damage can occur, trees may fall and the power may go out.

The western North Atlantic is one favored area for storms to undergo bombogenesis. This is a region where cold air from North America collides with warm air over the Atlantic Ocean. Warm waters of the Gulf Stream may also provide a boost in a festering storm.

As a result, some, but not all nor'easters may undergo bombogenesis.

The intense winds often create massive seas and may cause significant beach erosion.

In terms of precipitation, very heavy rain and/or snow may fall in the path of the storm undergoing bombogenesis.

Precipitation rate is produced from the rising column of air. When air rises, it cools and moisture condenses to form clouds and rain or snow. The faster the air rises and cools, the heavier the precipitation.

Snow was so deep, city had to dump it off bridges
Devastating snowstorm that hit DC almost 100 years ago still stands as the city's worst ever
Drone footage shows spectacular view of ghost town frozen in time
When the skies went dark: Historians pinpoint the very 'worst year' ever to be alive